Korean researchers have developed a system to examine the feasibility of sorting cherry tomatoes based on real-time color image processing. 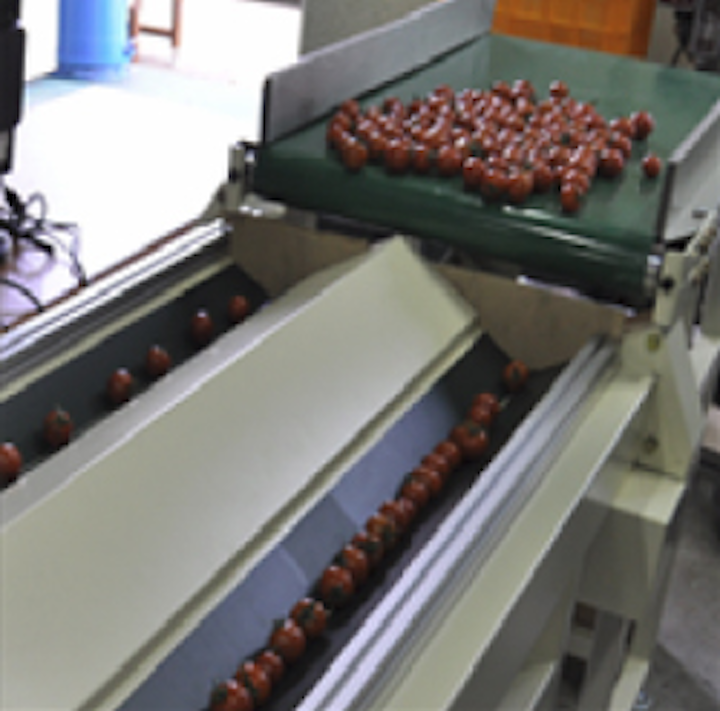 Korean researchers have developed a system to examine the feasibility of sorting cherry tomatoes based on real-time color image processing.

As cherry tomatoes ripen, their color changes from green through pink to light red and then red. For that reason, red tomatoes are exported to countries close to the producer while green tomatoes tend to be exported further. Hence the process of determining their color and then sorting them into appropriate batches is an important procedure.

The system that the Korean researchers developed for the task comprises three Honeywell (Morristown, NJ, USA) HCC-640 CCD color cameras and a Cronos plus frame grabber from Matrox Imaging (Quebec, QC, Canada) connected to a PC that processes the images of the tomatoes as they move past the cameras in a line down two conveyor belts.

The PC converts the images of the tomatoes from RGB space into La*b* color space and processes them to discriminate between the different stages of ripeness, after which an actuator on the machine sorts them into their appropriate categories. Software to control the image acquisition system was developed using Microsoft's (Redmond, WA, USA) Visual Studio operating on a Windows platform.

Results showed that the system was capable of grading the cherry tomatoes with an accuracy of above 80 percent and a maximum sorting rate of about 360 kg per hour.

A technical article describing the work of researcher In-Suck Baek and his colleagues from Chungnam National University and Sangmyung University is available here.