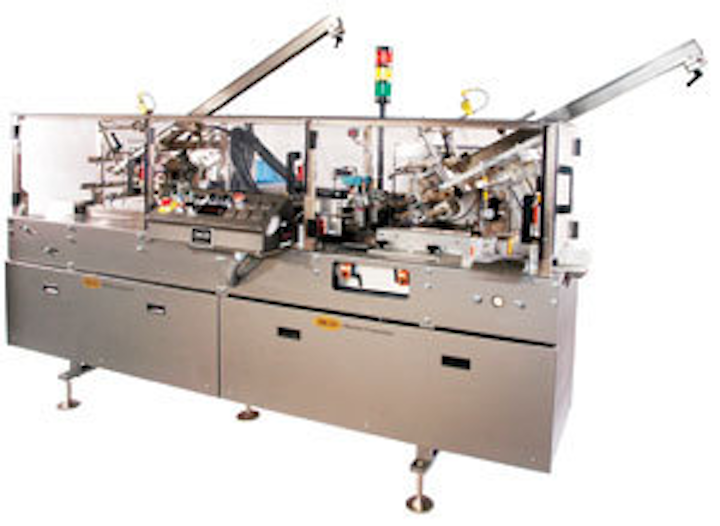 The US Food and Drug Administration (FDA) requires drug companies to attach two outserts to medicine bottles: one for the pharmacist and one for the patient. Printing-house MiniGraphics must ensure that it delivers the right outserts in the right combination to its pharmaceutical customers, and it relies on a vision subsystem from Automated Design Solutions (ADS) to achieve that goal. “Without machine vision we couldn’t control the quality of our outgoing products,” says Stephen DeLise, MiniGraphics president. “We wouldn’t have confidence that our customers are receiving the right parts.”

The specialized packaging machine MiniGraphics uses for this application is tailored to deal with matched pairs of pharmaceutical outserts, which are typically 8 × 11-in. paper documents folded down to about 1 × 1 in. That machine, the TwinSerter from MGS Machine, is 8 ft long with no integrated inspection subsystem. MGS does offer an optional barcode inspection subsystem, but MiniGraphics is obliged by its customer to use Data Matrix code.

Invented by RVSI Acuity CiMatrix (now part of Siemens Energy and Automation), a Data Matrix label can contain considerable redundancy. It can be encoded with patterns that assist in successful image capture and has room for error detection and correction codes. The requirement for crisp, high-contrast printing that accompanies 1-D barcodes is relaxed for Data Matrix codes, which still function after damage or missing ink. “If you take one bar off a barcode, you can’t read anything,” says Walter Kot, president of ADS, “but you can chop off a quarter of a Data Matrix code and you can still read it.”

Data Matrix also removes the orientation issue from the scanning process. “If the barcode reads left to right, the scanner has to be in that orientation,” says DeLise, “and if it’s a vertical, ladder type, the scanner configuration has to change to read that. In contrast, a Data Matrix code can be read at 360˚, with any orientation, as long as it’s within the field of vision. It will even work with code on something like a spinning bottle going down the line,” continues DeLise.

The TwinSerter is a pick-and-place machine with a glue station for combining two pharmaceutical outserts-known as Part A for pharmacists and Part B (the “medical guide”) for patients. The two documents are stacked in the two separate document feeders of the TwinSerter. A companion four-arm rotary carousel is paired with each feeder to perform the pick-and-place operation on the gravity-fed documents (see Fig. 1).

Each of the four arms, which are placed at 90˚ increments around the carousel, contains a rotating bar with a vacuum tip that picks up and drops off pieces of literature when a vacuum suction is applied and released. After picking up an outsert, the bar is rotated to place it on a conveyor belt, which contains an 8-ft-long lugged chain with disappearing flights.

After being dropped off by the first carousel, Part A passes through the machine’s adhesive section, which deposits a small amount of light glue onto the top of the form. When the carousel on the right drops Part B, it does so precisely on top of Part A, and the two pass through a “squeeze slot” in tandem to be glued together. Then they continue on to the end of the conveyor belt to become part of an output stack.

Integrating vision into the TwinSerter was straightforward, says Kot, although there were space constraints. “We couldn’t do everything we wanted with the camera and lighting,” he says, “but we knew the space we had to deal with and so designed our system around the MGS machine.”

The vision subsystem added to the TwinSerter by ADS has a dual-camera design, pairing one camera with each of the two feeder/carousel combinations. In each section, a camera is placed within the arc of rotation of the carousel so outserts can be inspected between pickup and dropoff (see Fig. 2). The pick-and-place bars on the rotating carousel rotate to bring the Data Matrix code on an outsert into the camera’s field of view for inspection before the outsert is dropped off onto the conveyor (see Fig. 3).

The role of the vision system in the TwinSerter is to ensure that Part A is Part A, that Part B is Part B, and that the literature package stacked at the end contains one Part A and one Part B. The twin cameras used are In-Sight 5110 vision sensors from Cognex. They are connected to a tower PC for a human operator to train the cameras and occasionally monitor the inspection process, and they are connected to the master PLC of the TwinSerter machine for process coordination (see Fig. 4).

The PLC and cameras use discrete digital I/O lines for the few signals that pass between them. The PLC sends trigger signals to the cameras when outsert positioning is right for them to take a digital picture. The PLC uses various cams, cutouts, and sensors throughout the machine to monitor positions and coordinate timing.

The cameras, in turn, send the PLC a pass signal when they determine that the Data Matrix code on an outsert is the correct code. All the image capture, processing, recognition, comparison, and decision functions occur within the vision sensor with no involvement of either the PLC or the PC.

The lack of a pass signal within a certain period of time indicates that an outsert has failed. If Part B is found to be bad, the system’s PLC tracks it and discards the outsert pair to which it belongs. It does this by activating a blow-off near the end of the TwinSerter, with a light curtain used to confirm that the pair has been successfully discarded. If a Part A outsert is found to be bad, on the other hand, the TwinSerter does not pick up a corresponding Part B to avoid outsert waste.

Issuing a “go” but not a “no go” message was a strategic decision, according to Kot, and an example of “fail safe” logic. “If for some reason the inspection system was turned off, bad outserts could be getting through without notifying the system with a fail message,” he says. “But by completing the inspection process with a pass signal, you know the inspection system is operational and doing its job.”

With the high volume of documents it handles, speed is a major concern for MiniGraphics. Utilizing Data Matrix code contributes to the throughput rate, as does the use of smart cameras in the design. Each outsert must be inspected and its validity determined before the next outsert is presented for inspection-a very small time frame. Smart cameras can do the job extremely quickly, Kot says, because all of the processing in done within the confines of the camera, with no need for external communications.

DeLise notes that the visual inspection system provided by ADS fits seamlessly into the normal operation of the TwinSerter. “Throughput is not affected by the inspection operation,” he says.

MGS Machine can provide a barcode scanner for the TwinSerter, but traditional linear scanning cannot handle 2-D codes such as Data Matrix. “Cameras give a little more flexibility,” says Kot. “When you have a barcode reader, you can only read 1-D barcode, but with a camera, you can read both 1-D barcodes and 2-D Data Matrix codes.” He adds, however, that barcode readers that can handle 2-D codes are starting to emerge.

The Cognex In-Sight 5110 vision sensors are integrated with a Cognex light source and ADS-supplied fixture. The In-Sight 5110 is a progressive-scan digital camera based on a 1/3-in. CCD with 7.4 × 7.4-µm pixels in a 640 × 480-pixel VGA format. The camera provides a selectable shutter speed between 16 µs and 1 s, and it captures up to 60 frames/s. The cameras interface to the PC via a small DIN-rail-mounted Ethernet switch/router module from Cisco Systems

One appeal of the Cognex cameras for ADS was its associated software, both the IDMax software residing on the camera for code capture and the In-Sight Explorer software that runs on the PC for configuring a vision inspection system and monitoring the process. Using In-Sight Explorer, ADS constructed a program that guides Mini Graphics QC personnel through the programming of the cameras regarding the Data Matrix codes they should expect to see. The cameras, in turn, communicate with the PC so it can display the captured code on its monitor, along with the expected code and cumulative pass/fail data (see Fig. 5). QC personnel at MiniGraphics check on the monitor every half hour or so, according to DeLise.