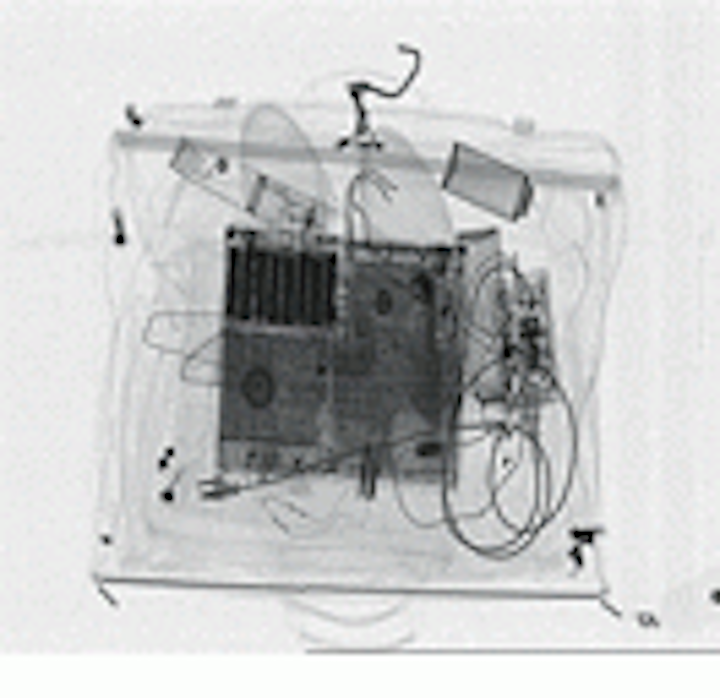 In upgrading their Model 66Z x-ray inspection system, American Science and Engineering (AS&E Billerica, MA) used Falcon, an FPGA-based image processing board from Univision (Billerica, MA), to speed image throughput and improve system resolution. Prior to moving to FPGA technology, AS&E used seven boards in its Model 66Z system. These included four CPU boards controlling two frame buffers with RS-170 video displays, one edge-enhancement board, and two preamplifier boards. In the new system, a single Falcon board controls both VGA displays and uses an on-board Xilinx Series 3000 FPGA for edge enhancement. A separate data-acquisition board connects to the Falcon for a total of only two boards in the new system. By reducing the number of boards from seven to two, the 66Z systems take less time to set up and test. Cabling is simplified, maintenance is easier, and both power issues and bus traffic conflicts have been eliminated.

"By incorporating FPGAs into the system," says Jamie Tanch, senior software engineer at AS&E, "the 66Z can be upgraded in the field without re-engineering the system."

AS&E submitted specs for image-processing functions such as edge enhancement and zoom to Univision. These were then implemented in a Xilinx FPGA on the Falcon board. Other features, such as pan, scroll, and density expand, were already present in the Falcon`s software toolbox and were easily implemented in the Model 66Z`s host CPU.

Image enhancement filtering in the AS&E system uses a 7 ¥ 7 convolution to highlight areas of images such as circuit boards, wire bundles, guns, and knives with high-spatial-frequency components. A density expand function identifies organic materials such as plastic explosives and flammable liquids.

In the design of its Model 66Z x-ray inspection system (left), AS&E used an FPGA-based programmable image processor from Univision. Enhanced image (bottom) makes it easier to identify objects within baggage (top). Already, the new system has detected a mail bomb for one of its customers, according to Ralph Sheridan, president of AS&E.