To ensure that automotive components such as aluminum cylinder heads are of the correct strength, they must undergo heat treatment before they can be shipped to the automotive manufacturer. 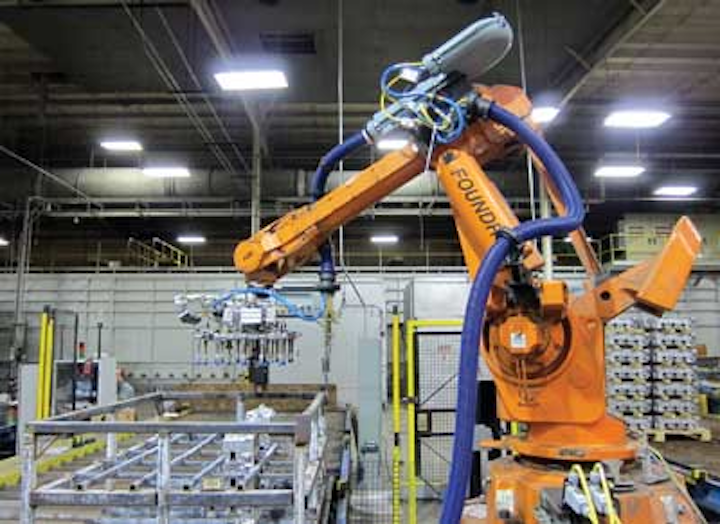 With such high throughputs required, AHT has automated the heat-treating production process with vision-guided robotic systems developed by LEONI Engineering Products and Services (see Fig. 1). To keep production running efficiently, cylinder heads must be unloaded from pallets, placed into metal baskets, and transferred to 1500–2000°F ovens. After heating, the cylinder heads must then be transferred from the ovens and replaced on pallets for shipment.

Cast cylinder heads are shipped to AHT in pallets, with each seven-layer pallet containing eight heads separated by wooden spacers. A full pallet of parts is placed onto a conveyor followed by a second empty pallet at the beginning of the automated process. This task is then repeated so every filled pallet on the conveyor is followed by an empty pallet.

As the pallets move along the conveyor, they enter a robotic workcell that consists of a six-axis robot from ABB Robotics, an ABB S4C+ robot controller, and a PC-based imaging system (see Fig. 2). As the pallet enters the workcell, a photosensor interfaced to the system's programmable logic controller (PLC) detects the presence of the pallet. This is used to stop the motion of the conveyor and initiate the robot's pick-and-place procedure.

Before pick-and-place can be accomplished, the exact positions of the parts on the conveyor must be determined. An ace 5-Mpixel camera from Basler mounted on the six-axis robot captures images of the pallet and transfers them over a GigE interface to the system's host PC.

To effectively pick each cylinder head from the pallet, the robotic vision system must first be calibrated using a 3-D checkerboard. This is achieved by capturing multiple images of the checkerboard from multiple angles using Optimaster 3D software from Elektroautomatik i Sverige (formerly Sensor Control) and calibrating captured image coordinates in real-world coordinate space.

After calibration, the robot head is moved to the approximate position where the first cylinder head is expected to be positioned on the pallet. The captured 2-D image is used to return the x, y, and z coordinates and the roll, pitch, and yaw to the ABB S4C+ robot controller. The data then instruct the robot where to pick the cylinder head from the pallet. After picking the part from the pallet, the part is moved to a second conveyor belt and into a metal basket that contains 24 pockets.

Since the part must be accurately placed in a vertical format into this basket, a second Basler ace camera located above the second conveyor is used to capture an image of the basket. Captured images from this camera are also transferred over the GigE interface to the host computer. There, Tordivel's Scorpion Vision Software running on the PC determines whether a part is already in the basket. If not, the cylinder head is placed in the basket and the process repeated for the remaining seven heads on the original pallet.

"To optimize the performance of these software packages," says Nicholas Tebeau, manager of vision solutions with LEONI, "both the Elektroautomatik [Sensor Control] software and Scorpion Vision software were optimized to run on single cores of a quad-core PC from Rave Computer. Communication between each package can then be accomplished using TCP/IP, reducing system overhead."

After all eight heads from the first layer of the pallet have been picked and placed into the basket, the wooden spacers that separate the layers are removed and placed onto the adjacent empty pallet. Images of the pallet are once again captured by the robot-mounted camera and analyzed using Scorpion Vision software to locate their x, y, and z positions. The robot picks and places each wooden spacer onto the adjacent empty pallet. Once these wooden spacers are removed, the system proceeds to pick and place the remaining cylinder heads and spacers in a similar fashion.

After emerging from the workcell, full baskets of parts are transferred to ovens for heat treatment. At the same time, empty pallets and pallets containing the wooden spacers are moved along the production line for offloading of finished, heated castings. To complete the automation process, a second robotic workcell is configured as a mirror image of the first.

Parts emerging from the oven are placed onto a conveyor and enter the imaging workstation. Here, the Scorpion Vision software determines the position of the part within the basket and the Optimaster 3D software enables the robot to pick and place the part onto the pallet on the second conveyor. This operation is repeated in the reverse order as before, resulting in full pallets containing seven layers of eight cylinder heads, with each layer separated by four wooden spacers. The finished, heat-treated cylinder heads can then be shipped to the automotive manufacturer for final engine assembly.

Already in use at Alfe Heat Treating, such systems can be configured (excluding robot systems) for a cost of $250,000 and result in a payback period of approximately nine months, according to LEONI's Tebeau.