After touching down onto Mars on Sunday, a camera aboard NASA's one-ton rover Curiosity has returned the first image of the Martian surface. 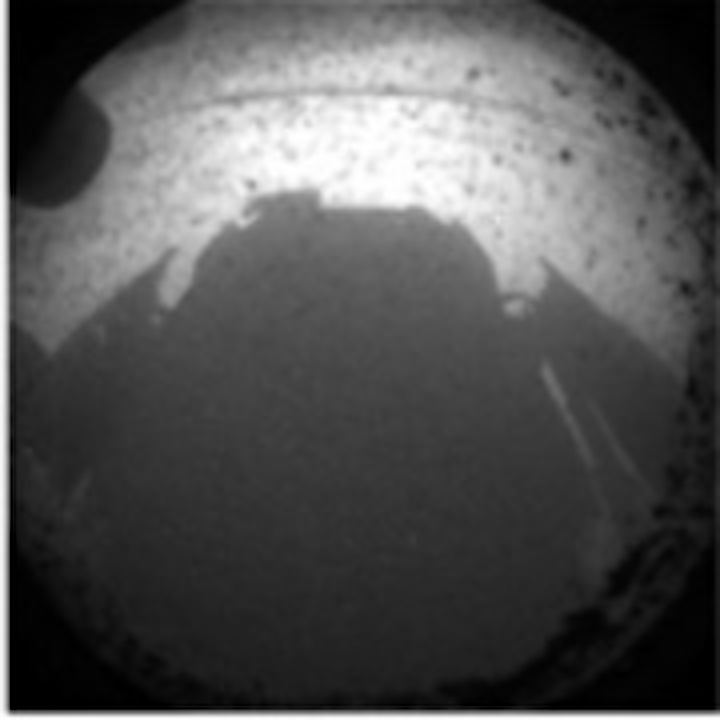 After touching down onto Mars on Sunday, a camera aboard NASA's one-ton rover Curiosity has returned the first image of the Martian surface.

Curiosity landed at 10:32 pm on August 5, PDT, (1:32 am EDT) near the foot of a mountain three miles tall and 96 miles in diameter inside Gale Crater. During a nearly two-year prime mission, the rover will investigate whether the region ever offered conditions favorable for microbial life.

Curiosity returned its first view of Mars, a wide-angle scene of rocky ground near the front of the rover. It was taken through a wide-angle lens on one of the rover's front left hazard-avoidance cameras at one-quarter of full resolution.

The clear dust cover on the camera is still on in this view, and dust can be seen around its edge, along with three cover fasteners. The rover's shadow is visible in the foreground.

As planned, the rover's early engineering images are lower resolution. Larger color images are expected later in the week when the rover's mast, carrying high-resolution cameras, is deployed.