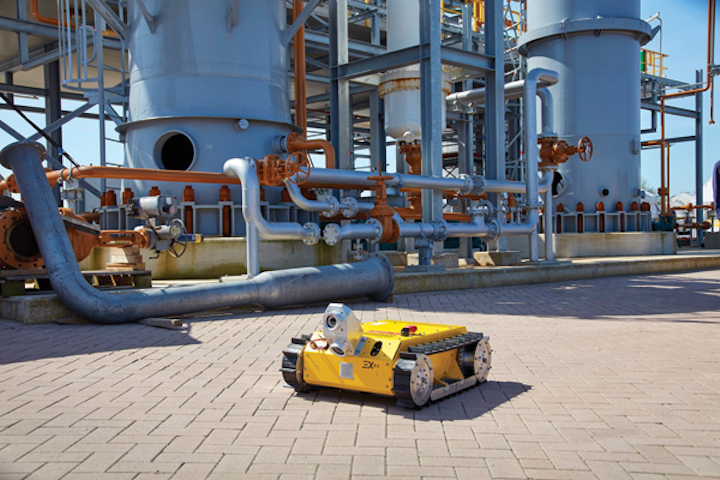 Hazardous environments such as oil and gas facilities often face harsh weather conditions and high risk of fire and explosions. Despite this, routine inspections and monitoring of these areas remains necessary. To keep people away from these potentially dangerous places, ExRobotics (Breda, the Netherlands; https://exrobotics.global) developed a series of robots specifically designed for suchtasks.

Designed to carry out autonomous routine and ad-hoc safety checks, ExRobotics’ first robot, the ExR-1, complies with international or European directives for explosion protection, according to the company. Measuring 950 x 680 x 430 mm, ExR-1 weighs 75 kg and operates for up to 2 hours at a time, during which it carries out general inspections on even surfaces. Enabling the robot to “see” is a three-camera system including an 18 MPixel camera for forward viewing and two 3.1 MPixel cameras for navigation. 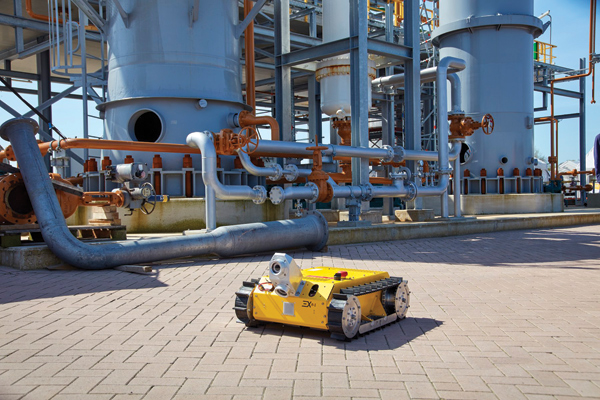 For forward viewing, the robot uses the USB 3.0 UI-3591LE-C-HQ camera from IDS Imaging Development Systems (Obersulm, Germany; www.ids-imaging.com) which is based on an 18 MPixel AR1820HS rolling shutter CMOS color sensor from ON Semiconductor (Phoenix, AZ, USA; www.onsemi.com). The USB 3.0 camera reaches a frame rate of 12.2 fps and features backside-illuminated image sensor technology. For navigation, the robot uses two USB 2.0 UI-1461LE-C-HQ cameras from IDS. These cameras feature a 3.1 MPixel MT9T001 rolling CMOS image sensor, also from ON Semiconductor, which achieves a frame rate of 11.2 fps through its USB 2.0 interface. Using these cameras, the robot navigates between inspection locations and contacts the operator when it is safe and ready for inspection. White lines and other signal signs such as beacons are used for orientation.

ExRobotics used the uEye API—part of the IDS Software Development Kit—to integrate the cameras into their system and developed its own software to process images from the robot. This software includes zoom and snap functions, which are necessary for monitoring and for detailed images during inspection.

ExR-1 robotic units, according to Samir El Awadi, commercial director at ExRobotics, are purely remote-controlled and rely on people to interpret the images they see. Going forward, the team is looking to add machine vision technology to reduce the load on humans. In particular, according to El Awadi, they’re looking at gas plume and vibration-detection capabilities.

In addition to the camera system, the robot’s main electronic box consists of an Intel Atom processor with Braswell 14 nm processor technology, a 32-bit processor from STMicroelectronics (Geneva, Switzerland; www.st.com) for main processor support, USB 3.0 and 2.0 ports, 7 general I/O connectors, and onboard power supplies, among other features. Also available for the robot are a microphone for sound monitoring, a docking station with battery charger, a light module for night operation (which consists of three 690 lumen LEDs orientated in the same direction as the cameras) as well as a G300 optical gas imaging camera from FLIR (Wilsonville, OR, USA; www.flir.com), hydrocarbon and acid gas point detectors, and a hydrogen sulfide gas sensor.

Remote operation of the robot is possible through dual-band antennas used to connect the robot to the control station using a public or private 4G LTE network. Customized software enables users to drive the robot using a joystick or a gaming controller. Furthermore, ExR-1 version 1.1 (ExR-1.1) offers an autonomous version of the robot that utilizes proprietary autonomous line following software. This function was successfully tested at Shell’s Pernis refinery in the Netherlands in August of 2018.

“We have shown that we can operate the robot over a distance of 9500 kilometers,” says El Awadi, referring to a recent test. A robot at the ExRobotics plant in the Netherlands was controlled from the other side of the world, from Rio de Janeiro, Brazil. This is a crucial point as a broad reach is essential for the main players in the oil and gas industry in the Middle East, North America, and the Far East.

Moving forward, the focus of the robot’s development will shift toward more autonomy, cloud-based storage systems, and the use of increased image processing coupled with artificial intelligence, according to ExRobotics.