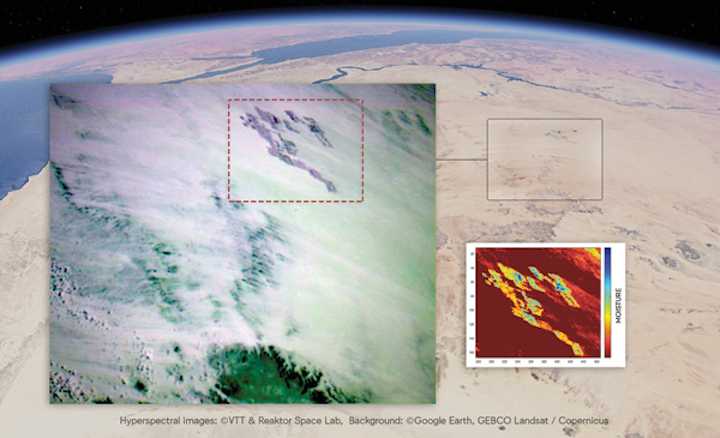 In the past, hyperspectral imaging techniques for space-based missions were feasible with only large and expensive satellites. These large satellites provided new data only when passing over a specific location and produced new images on several-dayintervals.

“This particular type of imaging data makes it possible to monitor the status of carbon sink resources. It also enables optimization of food production and reducing environmental load caused by agriculture, providing a way to sense water irrigation needs and optimize the use of fertilizers in fields,” says Anna Rissanen, Research Team Leader at VTT. 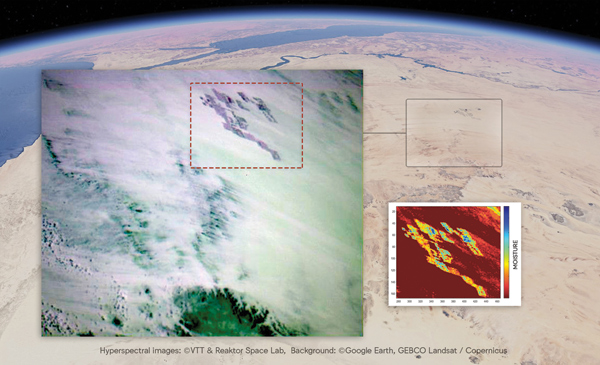 First land images from Reaktor Hello World overlaid over image data from Google Earth. This image was taken above the Sahara desert, near the borders of Libya, Egypt and Sudan. The fields in the upper-right-hand corner of the image are part of an irrigation experiment. The reddish close-up image measures the spectral signature of water, which enables visualizing the changing moisture content in the ground. The image reveals differences of water content in the fields: the blue-green parts indicate better irrigation, whereas the yellow-orange signify drier conditions.

This new, cost-effective hyperspectral imaging camera is based on a tunable Fabry-Perot interferometer, which is a linear optical resonator consisting of two highly-reflecting mirrors (with some minor transmissivity) and is often used as a high-resolution optical spectrometer. The camera features an in-orbit tunable filter with a spectral range of 900 to 1400 nm. The device was first launched aboard the Aalto-1 satellite in June 2017, demonstrating hyperspectral imaging for visible and VNIR range (500 to 900 nm). Now, the technology covers the infrared range.

The infrared wavelength region shown by the hyperspectral camera contains data usable for recognition of ground targets such as fields, forests, mines, or infrastructure, as well as the analysis of their features based on unique spectral fingerprints. These features, suggests VTT, may indicate the presence of chemicals such as fertilizers, biomass content, or rock species.

Additionally, hyperspectral cameras can be used to monitor vegetation health and the composition of greenhouse gases.

“This new technology will allow us to react to global environmental changes in nearreal-time. That opens up many new business opportunities as well as ways to combat climate change,” says Tuomas Tikka, CEO of Reaktor Space Lab, Reaktor’s portfolio company that specializes in building advanced nanosatellites for space-based services.

Images captured by the hyperspectral camera aboard Reaktor Hello World nanosatellite were first taken on December 2 and were downloaded from the satellite during the first weeks of December.

“The image above Sahara (pictured) shows how the water content of an area can be determined and mapped based on infrared spectral image data,” explains Antti Näsilä, Senior Scientist at VTT and the leading technical expert for the camera development of the Reaktor Hello World nanosatellite mission.

He continues, “This type of information could prove crucial for areas fighting drought or forest fires, both of which are becoming more common with the changing climate. In the future, nanosatellite constellations could provide, for instance, concurring updates about the severity of the droughts in each neighborhood in California.”

The joint project was started in 2016 and was launched this November. Reaktor Space Lab has a website (http://bit.ly/VSD-RHW) that provides updates detailing Hello World’s telemetry data every time the satellite passes over its Helsinki, Finland ground station. In addition, its real-time orbit information is displayed on the site.