Understanding the evolution of color imaging and the technology roadmap ahead can help developers choose the right color camera for their application. 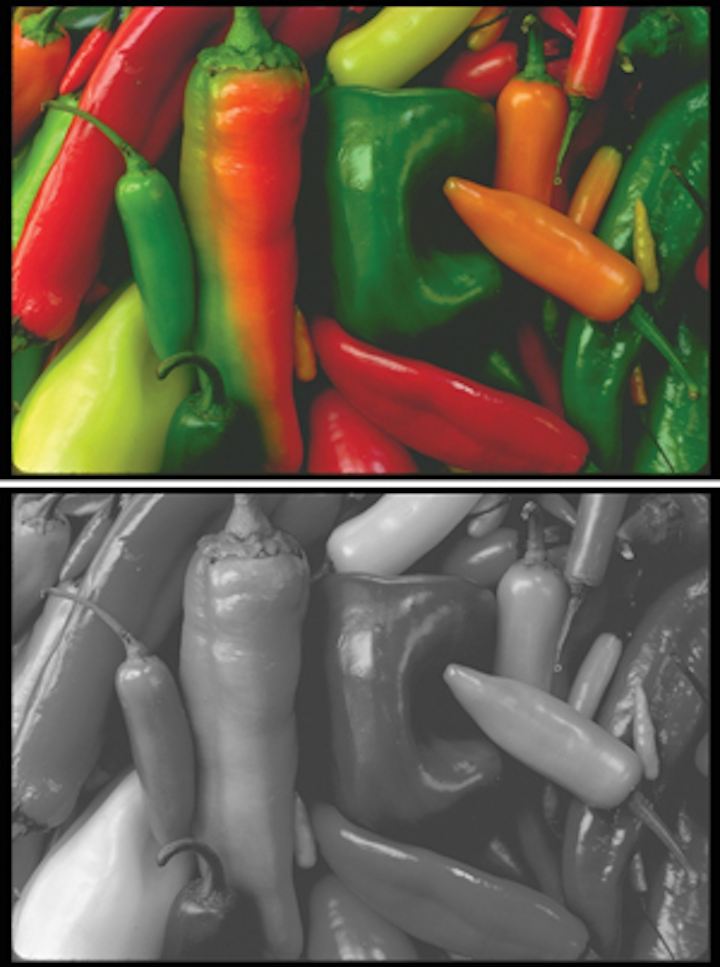 Understanding the evolution of color imaging and the technology roadmap ahead can help developers choose the right color camera for their application.

While monochrome images are still sufficient for many of today's inspection applications, such as looking for defects, scratches, or cracks, the use of color has grown for applications where monochrome does not provide enough differentiation to identify an object of interest. In the past, color imaging was not widely used in machine vision inspection because technology costs were too high and camera speeds were too slow. But over two decades, the technology behind color line scan cameras has evolved to the point where they are much more widely used.

A color image consists of the intensity and chrominance information of the reflected light from the object. There is no doubt that identifying some objects inspected with color imaging is much easier than a similar inspection based on monochrome imaging. In some cases, color imaging is absolutely needed. For example, in food inspection, it would be difficult to tell which one is the red pepper and which one is the green pepper if you were only provided with a monochrome image (Figure 1).

The need for color imaging is not limited to food inspection. Many other applications, such as printing, packaging, electronics, semiconductor, pharmaceutical, and web inspection require color imaging.

The first color line scan camera was a prism-based 3CCD (Charge Coupled Device) camera (Figure 2). Such devices could be used for currency imaging or high-value packaging inspections. Early versions of this technology were not widely adopted though, because they were subject to vibration, which discouraged users from choosing them.

Further advances soon followed to deliver more robust technology. The next generation of cameras were trilinear CCD color cameras that featured a much faster line rate at about a third of the price, making it an attractive option for applications such as printing, packaging, food, pharmaceutical, electrical, cotton, or web. These advances were achieved by using a different sensor architecture. There were three pixel lines fabricated on the same die, each line covering red, green, and blue colors respectively (Figure 3).

One challenge with trilinear camera technology is the three colors' separation, as the color lines on the trilinear sensor do not share a common optical axis. This results in three separate object points for the three different color lines. Because of this, the color image is misaligned along the scanning direction. Instead, trilinear cameras deal with color separation via a technology known as spatial correction. Spatial correction allows the user to input an appropriate parameter to re-align color images.

In addition to spatial correction, this generation of trilinear cameras included more auxiliary functions to accommodate users and drive adoption of color imaging for some machine vision applications. Some features allowed users to fine tune each pixel's reaction to the incident light, and to upload one user set to multiple cameras to make set up easier. Some cameras included a color correction feature that enabled nearly true-color tone images. This function is especially useful for applications that require extremely high quality color images such as banknote inspection or high quality packaging inspection.

The next big leap in the development of cameras for color inspection were CMOS-based tri-linear cameras. These CMOS-based cameras built on the advances of previous generations, and added a significant increase in performance at a lower price.

The parallax correction feature allowed users to mount the camera at angles (the sensor surface is not perpendicular to the object surface), but still get non-dispersion color images. Some users take advantage of this feature to operate one camera in the place of two cameras.

For example, machine vison inspection of cigarette packages needs to check both color printing and concave-convex shape of the package. Previously, this required two different cameras, but technical advances enabled some users to angle-mount a single camera to allow it to check both items.

High-speed inspection, in many cases, is light starved due to a short exposure time. These kinds of applications require extremely responsive cameras, and single-line-per-color trilinear cameras may not be capable of performing this kind of task.

Where a trilinear camera is a single line per color, the Piranha XL is four lines per color, making the responsivity four times higher with very low noise. Because cameras like this one are 16K with a maximum line rate of 70 KHz, and a maximum throughput of 3.5 GB/second, they need a data-splitting function so the camera can distribute data to multiple host computers simultaneously, if needed.

Some applications might require color, but not necessarily true color. In applications such as pharmaceutical, security, electronics, and food, the main consideration to use different colors is to discriminate different characteristics of the objects. In these cases, a low-cost bilinear color camera can be a cost-effective solution. A third color can be interpolated from neighboring pixels in cameras with bilinear architectures (Figure 5).

In a security application inspecting the undercarriage of automobiles (Figure 6) the bilinear camera architecture used provides a color image that is not truly what we would see with the naked eye, however, it does provide enough contrast to be able to view the various undercarriage characteristics.

Quadlinear cameras can pair color vision with other technologies to visualize object characteristics that are not visible to the human eye or monochrome cameras. These cameras are especially powerful for applications where the object contains some non-visible spectral component such as a solar panel, banknote, and glass inspections.

Color line scan cameras can also be used as multi-channel mono line scan cameras. This is a clever way to use the color camera. For example, assume there are three defect items. Scratches, dust, and muras need to be identified and they are visible in red, green, and blue light respectively.

Then all that is needed is to apply the red, green, and blue lights together to illuminate the object at the same time and process the red, green, and blue channel images separately. Some color line scan cameras can allow each channel exposure time to be controlled independently, so that the user is able to grab high dynamic range monochrome images with them. This is a color-as-mono application, and these applications require high color pureness.

The color filters of current trilinear cameras are based on dye or pigment and have spectral cross-talk among color channels. The red, green, and blue more or less mix together. To address this challenge, a new dichroic filter with minimum crosstalk, is under development. Once the technology is complete, it will be beneficial for color-as-mono applications.

Of the progress made over the last two decades in sensors, resolutions, speeds, interfaces, and multichannel technologies, perhaps speed is the greatest. Current models image at least seven times faster than models from twenty years ago. Demand for color imaging continues to increase and no doubt will fuel the drive for faster, cheaper color line scan cameras well into the future.