The Swiss company, Leuthold Mechanik AG makes machines for manufacturing aluminum containers for pet food, preserves, pies, ground coffee as well as for substances as varied as fuel pastes and packaging for medical products such as inhalers. 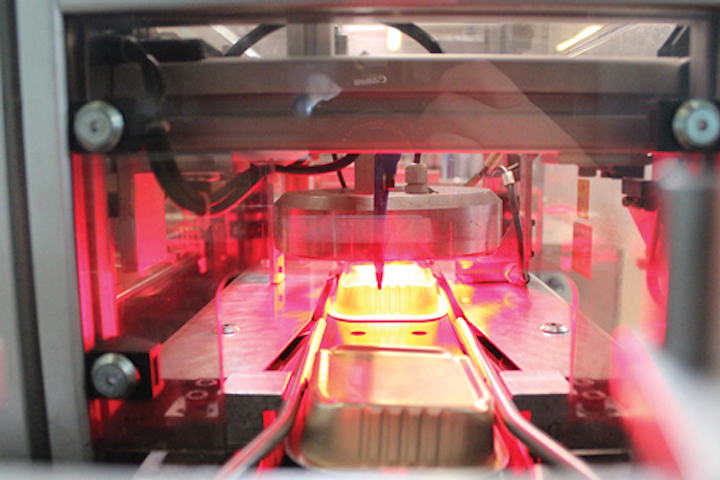 "Aluminum is relatively expensive as a base material, so the walls of the containers must be as thin as possible to keep the costs low," explains Mathias Leuthold, who is responsible for the management of toolmaking and mechanical engineering at HLM. "On the other hand, as the material thickness is reduced, there is an increased risk that holes will appear during the forming process as a result of inclusions in the raw material or excessive stresses during the forming."

Because holes result in leaks, each container must be checked to ensure it will function as intended, and properly store and preserve its contents. HLM relied on the Swiss subsidiary of their partner Stemmer Imaging (Puchheim, Germany; www.stemmer-imaging.com) for the vision system development.

After a feasibility study, Stemmer Imaging recommended that HLM upgrade from intelligent-camera-based vision systems used on earlier equipment to embedded PC-based systems for the next generation of machinery. One such machine in the HLM Competence Centre produces pet food containers at a rate of 480 parts per minute.

Aluminum raw material is fed from rolls into the machine and cut into strips before entering the press. Four containers, formed by each stroke of the press, are blown out and transported in-line to the quality control modules by means of four parallel transport belts and mechanical tracks.

In each quality control module, mounted underneath each transport track, a Genie Nano camera from Teledyne DALSA (Waterloo, ON, Canada; www.teledynedalsa.com) equipped with suitable optics from Lensation GmbH (Karlsruhe, Germany; www.lensation.de), captures an image of each container passing overhead as it triggers a light barrier.

"The Genie Nano cameras met all the requirements with respect to performance, resolution, frame rate and price," notes Claudio Sager, Managing Director of the Swiss subsidiary of Stemmer Imaging. "However, there is no standard lighting that meets these requirements, so in this case we have developed customer-specific lighting for Leuthold Mechanik."

Custom LED lighting, which is also triggered by light barriers, is integrated above the testing stations in the machines. The specific size and defined lighting angle, allow light transmission through any holes in the containers, which the vision system can easily detect.

The four cameras connect to an embedded PC from Worx Engineering GmbH (Romanshorn, Switzerland; www.worxengineering.ch) running Common Vision Blox (CVB) imaging software from Stemmer Imaging. The embedded PC evaluates all of the images from the four lines and also handles machine control. Processing 120 images per minute on each track for a total of 480 images per minute, identifying defects, and triggering rejects to the discharge station.

"Even with this central component, the applications know-how of Stemmer Imaging was decisive in finding the perfect solution for us," Leuthold notes. Currently the engineer and his colleagues are completing the second machine of the new PC-based generation which, after training in machine operation, will start production at a customer's premises in Austria. "And many more will follow," Leuthold is certain.