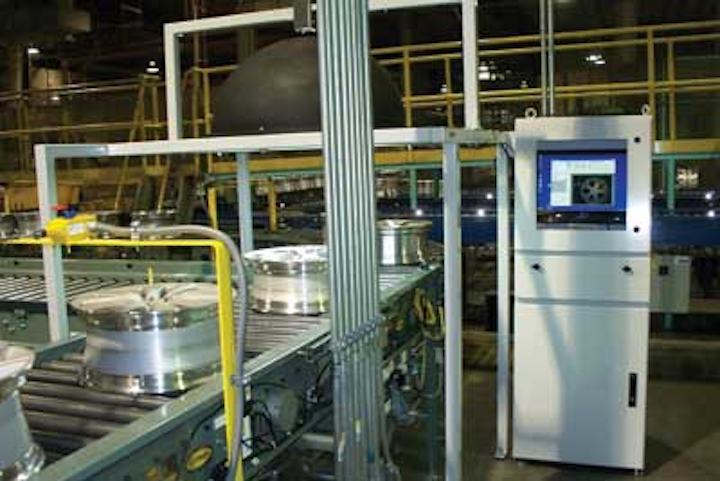 As one of the world’s largest suppliers of cast aluminum wheels for passenger cars and light trucks, Superior Industries International (Van Nuys, CA, USA) designers and manufacturers many different types and sizes of products in six locations in the US and Mexico. At each location, more than 50 different types of wheels are cast, machined, painted, and inspected before final shipment to the customer.

“After the wheels are cast,” says Josh Haag, president of Sensor Control (Granger, IN, USA), “they are placed on a catch pan, inspected visually, and then transferred to overhead monorail chairs where they cool before additional processing.” Since different wheel types are being manufactured simultaneously, multiple monorails are used to carry various wheel types and sizes at rates of approximately 660 wheels per hour per system.

After cooling, a flat conveyor transfers wheels at 1200 wheels per hour to a sorting station where they must be classified by type and size. In the past, the sorting process was accomplished manually, which was time-consuming, labor-intensive, and prone to human error.

Haag and his colleagues at Sensor Control have developed an automated sorting system that uses geometric pattern recognition to identify and sort the wheels as they traverse the conveyor at 1200 parts per hour (see figure). “Because the aluminum wheels are specularly reflective,” says Haag, “diffused, uniform light must be used to highlight the features of each wheel.”

The Sensor Control system uses a 36-in.- diameter white LED dome light from Metaphase Technologies (Bensalem, PA, USA) placed directly above the conveyor. As the wheels traverse the conveyor, a photoelectric switch captures images from a TGX-03 CCD GigE camera from Baumer (Radeberg, Germany) that is embedded in the dome light. These images are transferred to a PC over the GigE interface.

“Before each wheel can be identified,” says Haag, “the system must be trained to recognize specific features that characterize each wheel.” After images of the over 50 different wheel types are captured, geometric pattern matching is used to build a model that identifies each wheel type. Although a number of different software packages exist to perform this task, Sensor Control chose to incorporate the Matrox Imaging Library (MIL) from Matrox Imaging (Dorval, QC, Canada).

To ease the task of operator training, Haag and his colleagues sell and market OptiMaster 2-D Sort for this application. For the OptiMaster 2-D platform, Sensor Control chose to customize MIL using an in-house graphical user interface (GUI) written in Visual C++. This GUI allows the operators to visualize the image being captured and to rapidly build a model of the wheel based on geometric pattern matching.

“More importantly,” says Haag, “the operator can mask any areas of the wheel such as flashing that lack any geometric features so that the pattern-matching algorithm can perform faster.” After the models are created for multiple wheel types, the system contains all the information required to sort the parts.

In operation, wheels move under the inspection station and the overhead camera is triggered by a photoelectric sensor. After an image of the wheel is captured and identified, the information is transferred to a PLC that controls pneumatically actuated spurs, which bin the wheels according to their size and shape. After the wheels are binned, they are shipped to the customer for installation on cars and light trucks.