Terahertz imaging systems are helping pharmaceutical manufacturers reveal imperfections, such as uneven coatings and cracks, in their products. 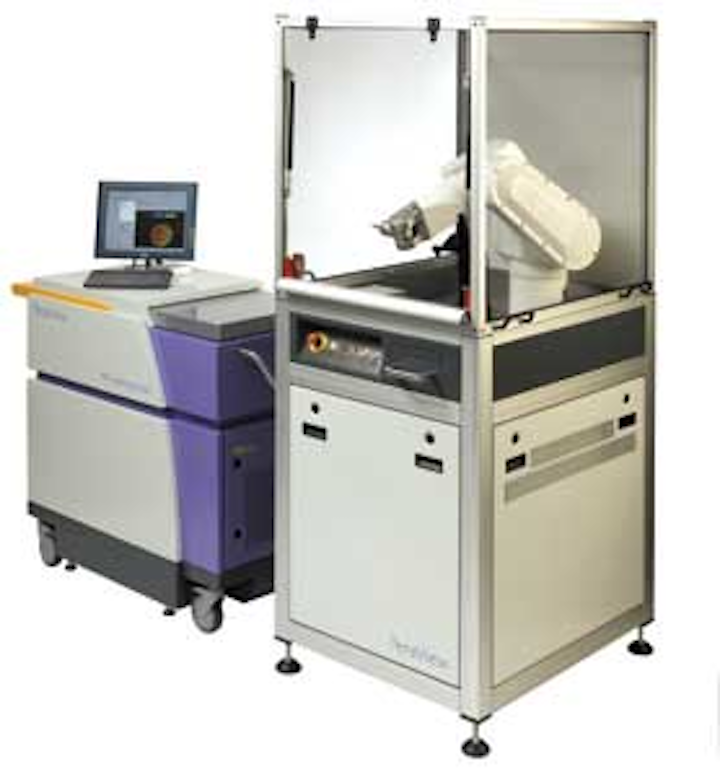 As manufacturers develop increasingly sophisticated products incorporating multiple layers of active ingredients, these manufacturing processes are becoming more complex. This complexity requires inspection systems that can analyze the critical quality attributes of the tablets and how they relate to specific manufacturing processes.

One technology used to accomplish these tasks isterahertz pulsed imaging (TPI)—a nondestructive method that can be used to identify key tablet attributes such as coating uniformity, thickness, and porosity.

Having identified the advantages of terahertz imaging, engineers atTeraView have developed the Imaga 2000 standalone terahertz imaging system to produce complete nondestructive volumetric images of the coating and core of pharmaceutical tablets (Fig. 1).

Because imaging a single tablet in detail can take up to 30 minutes, TeraView has also developed a Staubli-based robotics unit to enable full automation of the tablet inspection process. A fiber-optic driven terahertz transmitter housed in the robotics unit directs terahertz pulses toward the tablet; a receiver detects the reflected pulses from features within it depending on changes in refractive index.

The robotic sampler holds the tablet and moves it in relation to the terahertz beam, ensuring all parts of the tablet are analyzed (see "An inside look at terahertz imaging" below).

Because most pharmaceutical tablets have a curved surface, the system uses a laser gauge to model the surface shape and the curvature of the tablet prior to imaging. The surface model generated by the scanner is used to ensure that while measurements are taken, the surface of the tablet is always presented normal to the terahertz probe.

The robotics unit permits a user to image up to 36 tablets in an automatic run where each tablet is imaged in sequence without operator intervention. The ability to run samples unattended overnight doubles the productivity and throughput, and is equivalent to the daytime running of two manual systems.

One of the most important characteristics of any pharmaceutical tablet is the thickness of its coating, or multiple coatings contained within.

By imaging tablets using terahertz radiation, it is possible to nondestructively measure the thickness of the interfaces between the boundaries of coatings with a depth resolution of 40 μm and a precision of 1 μm. This thickness can be measured by calculating the time differences between terahertz pulses reflected from the tablets (Fig. 2).

For manufacturers who develop drugs that must dissolve in the body at a specific location and/or rate, coating thickness is an important parameter. Traditionally, to determine whether their products conform to FDA requirements, drug companies perform wet dissolution tests. Terahertz pulsed imaging may be an attractive replacement for wet dissolution testing in product development and eventually for process analysis.

In one application, the TeraView Imaga 2000 system examined the coating properties of an enterically coated lozenge-shaped antacid tablet developed to pass though the stomach and dissolve in the gut.

After receiving complaints that the tablet was dissolving in the stomach, however, the FDA imaged batches of the tablets using the Imaga 2000 system; the variability in dissolution rates was correlated with variations in tablet coating thickness.

The analysis showed that the coating thickness and uniformity on the wall of the tablet could not only provide an indication of dissolution behavior but also a more accurate measurement of quality for the finished product (Fig. 3).

Subsurface cracks formed during the compression process through the introduction of stress can also be detected by the system. These cracks can cause tablets to break apart when they are later coated to control their absorption rate, improve their taste, or protect them from moisture.

Changes in refractive index due to compression variations and cracks can be detected using the Imaga 2000 TPI system. The terahertz maps generated can be used to provide guidance on the relative measure of the density of the tablet material at specific depths. The relatively uniform color of the plots (see Fig. 4, left), for example, highlights the fact that no delamination issues occurred when one set of manufacturing processes was used, while another set (see Fig. 4, right) led to the presence of cracks within the tablet.

Terahertz pulsed imaging can also help manufacturers identify whether any agglomeration of active ingredients within a specific tablet has occurred. Ideally, when the ingredients are blended, they form a homogeneous powder, which is then compacted prior to coating. However, the homogeneity of the ingredients depends upon the formulation of the tablet and specific processing conditions. If both the formulation and the processing variables are not carefully controlled, agglomeration can occur.

Homogeneity can be determined using TPI by carrying out a structural mapping of the coating and core region of a tablet (see Fig. 5). In this example, the integrity of the tablet coating is sound, but agglomeration of the active pharmaceutical ingredients has occurred. Such analysis enabled the product to be redesigned in a timely fashion.

Aside from characterizing the physical properties of manufacturers' products, the Imaga 2000 system can produce statistics that deliver information on how effectively their tablets are being coated. The TPI system can be decoupled from the robotic subsystem and the emitter/receiver combination interfaced to a tablet coating system for this procedure.

Tablets are coated in a controlled atmosphere inside a perforated rotating drum. As the drum spins, tablets are lifted and turned from the sides of the drum into the center, where the surfaces of the tablets are exposed to an even amount of coating from a liquid spray. The coating is then dried onto the tablets by heated air drawn through the system.

As the tablets are arrayed against a mesh on the drum, they are subjected to terahertz radiation; the terahertz receiver measures the reflected energy and determines the coating thickness on each tablet at a single point in time.

Using the data, a histogram can be developed that shows the number of tablets that have been imaged and their coating thicknesses (see Fig. 6). This helps manufacturers accurately determine whether any changes might be needed in the coating process to more effectively coat their tablets.

Terahertz pulsed imaging is useful in helping companiescharacterize pharmaceutical samples. Still, many pharmaceutical ingredients exhibit resonance absorption features in the terahertz frequency range. Hence, terahertz spectroscopy systems—in which the light reflected from a sample is analyzed in the frequency rather than the time domain—can provide rapid identification of the different crystalline forms of drug molecules, which can display different solubilities, stabilities, and bioavailability. These are also important factors in measuring the therapeutic efficacy of a drug.

An inside look at terahertz imaging

To understand the physical attributes of pharmaceutical products, detailed images must be produced that highlight any structural defects in their composition.

Products are first subjected to terahertz radiation that is first generated by illuminating a proprietary gallium-arsenide (GaAs) emitter with radiation from an 800-nm pulsed titanium:sapphire (Ti:sapphire) laser (see figure).

Energy from the pulses of laser light cause a transfer of intermittent pulses of electrical current across the dipoles of an antenna etched on the emitter's semiconductor substrate. This causes pulses of terahertz radiation with less than 500-fsec pulsewidth to be emitted. These are then focused onto the tablet.

Detection of the terahertz pulse reflected from the tablet occurs through a similar effect in the receiver. Here, the same laser also pulses the detector to generate charge carriers that are then subsequently amplified by the weak electric field from the reflected terahertz pulse, producing a current that can be detected. Hence, the current generated in the receiver is proportional to the amplitude of the reflected terahertz electric field.

Thousands of terahertz pulses are generated for each point in a sample to be imaged. By varying the time at which the laser pulse illuminates the receiver through the use of a computer-controlled optical delay line, and simultaneously sampling the terahertz signals incident on the detector, the temporal profile of the entire terahertz pulse can then be reconstructed.