A new interactive system that that helps computer users quickly gauge what has changed since they last looked at a display screen has been developed by scientists at St. Andrews University (St. Andrews, UK). 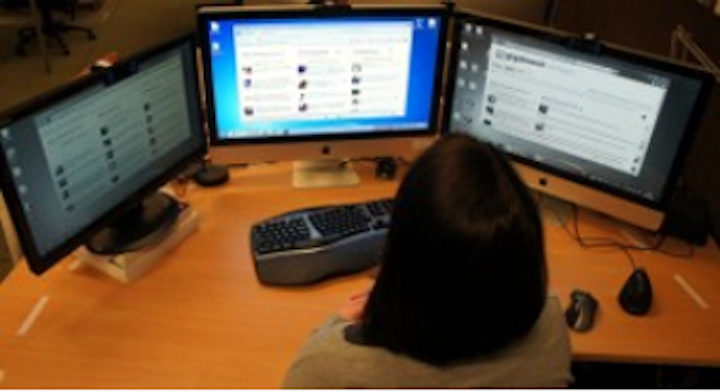 A new interactive system that that helps computer users quickly gauge what has changed since they last looked at a display screen has been developed by scientists at St. Andrews University (St. Andrews, UK).

The researchers believe the system would be useful in everyday work situations to reduce distractions and improve the quality of life of office workers. However, it may also be particularly useful for those in high-pressure roles who monitor a large number of screens, such as flight controllers or workers in nuclear power stations.

The so-called "Diff Displays" system uses a camera mounted on top of each computer screen which captures images of a user's eyes. Computer vision algorithms then identify the user's eyes, after which the system can determine which of a number of screens they are looking at.

Then, the static data on the screens not being directly observed by the user are faded out while the data that change over time are highlighted. When a user looks back at a display, the system changes back to display the actual screen content.

A study of the system in action during a single work week indicated that it reduced the number of times someone switched their attention between the displays. The researchers think the technology could eventually become a standard part of our operating systems.

The Diff Displays executable code is available as a free download for Microsoft Windows. The program, illustrations and a video of the system are available here.

Computer scientists at the University of Buffalo (UB; Buffalo, NY, USA) are exploring whether machines can read visual cues that give away deceit.

Researchers at the University of Tampere (Tampere, Finland) are developing a biometric security system based on classifying eye movement.

Tobii Technology (Danderyd, Sweden) has selected a behavioral research team that used eye-tracking technology to enhance its understanding of Progressive Supranuclear Palsy (PSP) as the winner of its annual Tobii EyeTrack Award.