The highest resolution near-global topographic map of the Moon ever created has been released by the Arizona State University (Phoenix, AZ, USA) team that oversees the imaging system onboard NASA’s Lunar Reconnaissance Orbiter (LRO). 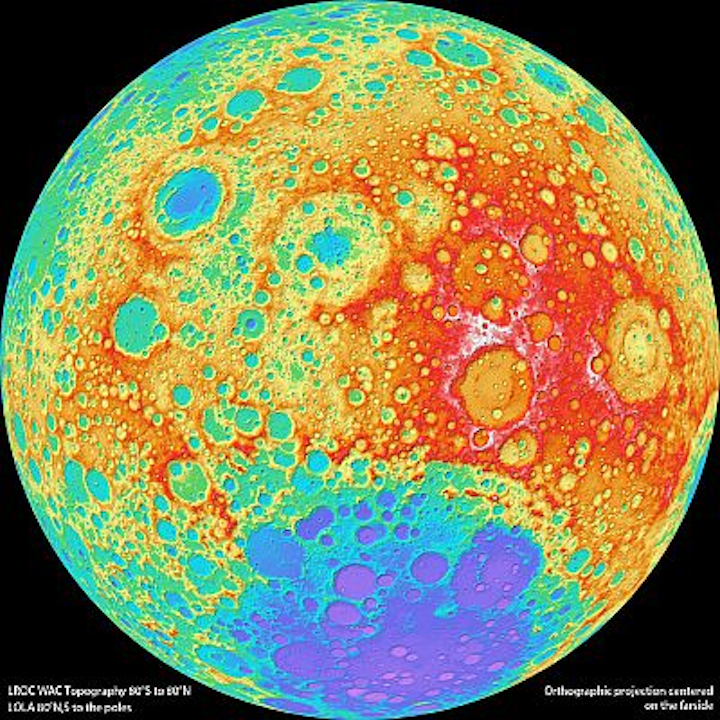 The highest resolution near-global topographic map of the Moon ever created has been released by the Arizona State University (Phoenix, AZ, USA) team that oversees the imaging system on board NASA’s Lunar Reconnaissance Orbiter (LRO).

Due to instrumental limitations of previous missions, a global map of the Moon’s topography at high resolution has not existed until now. With the LRO Wide Angle Camera (WAC) stereo imaging and the Lunar Orbiter Laser Altimeter (LOLA), however, scientists have now been able to accurately portray the entire Moon at high resolution.

According to Mark Robinson, principal investigator of the Lunar Reconnaissance Orbiter Camera (LROC), the images now enable researchers to determine slopes of all major geologic terrains on the Moon at a 100-m scale.

The near-global topographic map was constructed from 69,000 WAC stereo models and covers the latitude range 79°S to 79°N, 98.2% of the entire lunar surface.

Due to persistent shadows near the poles, it is not possible to create a complete stereo-based map at the highest latitudes. However, the LOLA instrument onboard LRO excels at mapping topography at the poles. Since LOLA ranges to the surface with its own lasers, and the LRO orbits converge at the poles, a very high-resolution topographic model is possible, and can be used to fill in the missing images from the WAC.

The WAC topography was produced by LROC team members at the German Aerospace Center.