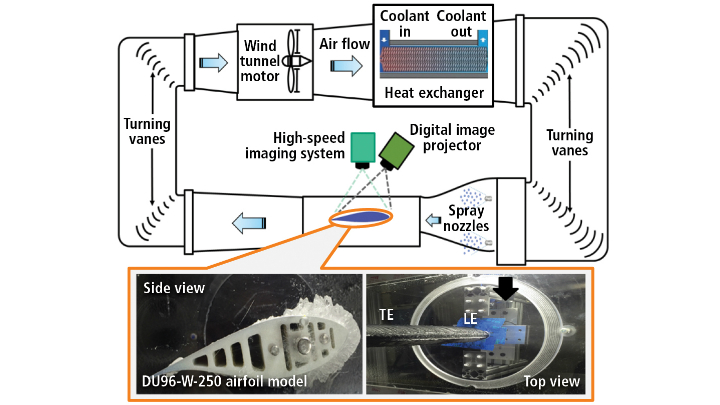 The Aircraft Icing Physics and Anti/De-icing Technology Laboratory, led by Dr. Hui Hu, a professor in aerospace engineering at Iowa State University, uses a 3D imaging system, infrared camera system, and high-speed camera system to study the formation of ice crystals on airplane wings, wind turbine blades, and power cables, and discover how to prevent or delay the ice from forming.

The tunnel, donated to the university in 2010 by the Goodrich Corporation, now UTC Aerospace systems (Charlotte, NC, USA; https://utcaerospacesystems.com/), and refurbished in 2014, can create a maximum wind speed of 100 m/s (224 mph) and an air temperature down to -25° C. The size of the water droplets and the liquid water content are also variable, allowing the research team to study different varieties of ice like glaze ice (freezing rain) and rime ice (formed in cold and dry conditions).

In the 2018 research paper, An experimental investigation on the unsteady heat transfer process over an ice accreting airfoil surface, (http://bit.ly/VSD-ICE) the lab utilized high speed and thermal imaging technology to study surface temperature distribution over a 3D printed airfoil/wing model as ice accreted over its surface. A FLIR (Wilsonville, OR, USA; www.flir.com) A615 camera with 640 x 480 pixel resolution and GigE Vision interface, running at 200 fps, was mounted 350 mm above the airfoil model and observed the model through an IR transmission window.

The second vision system, the Digital Imaging Projection (DIP) 3D scanning system, captured the shapes of the ice structures formed during the experiment using structured light, a technique like stereo vision that replaces one camera with a digital projector to project a digital image with known pattern characteristics onto the model. Measurements were taken to generate 3D models of the shapes formed over the progression of the experiment, showing the increasing amount of ice. 3D data from the system was used to 3D print models of the ice geometry that formed over the wing surfaces