Observing the environment without exposure to danger. 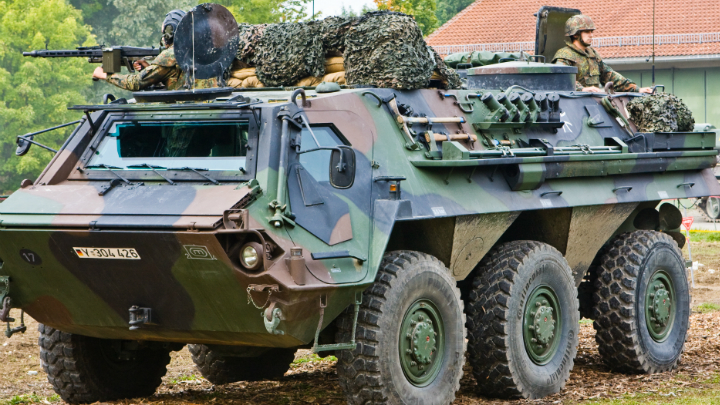 SETAS (See-through Armor System), developed by defense and security electronics company Hensoldt (Taufkirchen, Germany; www.hensoldt.net), allows crews of armored vehicles to see in 360° around their vehicle without exposing themselves to danger.

The crew of an armored vehicle that must operate in tight quarters like an urban theater, or in an environment that gives infantry plentiful cover behind which to advance in secret, needs constant awareness of their surroundings. Cameras and closeable slats can afford a view outside, but in some cases a vehicle crew might need more information about their surroundings than these limited options can provide. If that means someone sticking their head out of a hatch, it also means they temporarily lose the protection of the armored vehicle.

Crew members utilize SETAS via a head-mounted display like those used in virtual- and augmented-reality systems. As the crew member pans their head, they effectively see through the walls of the vehicle and into the surrounding environment.

SETAS options include a hemispherical camera to see directly above the vehicle, acoustic sniper detectors, and laser-warning systems. Hensoldt also states that SETAS can run software algorithms to detect potentially threatening movement within 360° of the vehicle. The system is designed for integration into any vehicle or for use as a standalone unit controlled via standard or smart display, smart glasses, or tablets.

The system was demonstrated at the Defence and Security Equipment International exhibition (DSEI) held in London, UK, from September 10 to 13, mounted on a General Dynamics (Falls Church, VA, USA; www.gd.com) Eagle 6x6 armored vehicle. Hensoldt will make SETAS available for purchase in 2020.