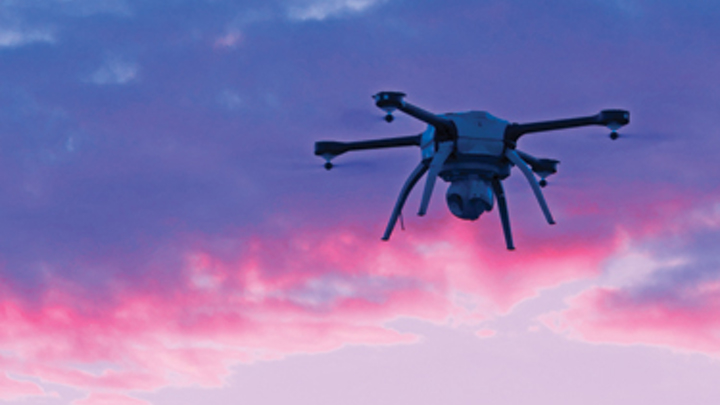 Oil refineries use hydrogen to lower the sulfur content of diesel fuel. According to the United States Energy Information Administration (EIA; Washington, DC, United States;www.eia.gov), refinery demand for hydrogen has increased as demand for diesel fuel has risen both domestically and internationally and as sulfur-content regulations have become more stringent. Much of the hydrogen used at refineries is produced on-site.

To do so, a process such as steam-methane reforming is used in which methane is mixed with steam at high temperatures in catalyst-filled pipes resulting in a mixture of hydrogen, carbon monoxide and a small amount of carbon dioxide. At the end of this process, purification to obtain hydrogen is accomplished by removing the carbon monoxide with a pressure swing adsorption (PSA)system. 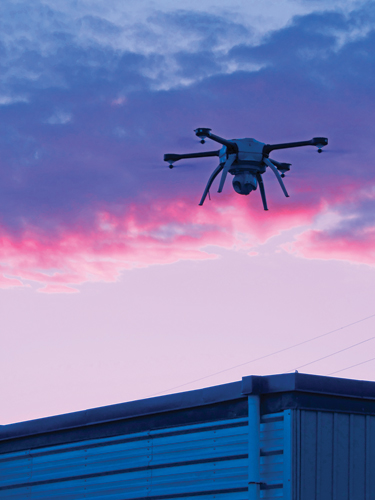 “Oil refineries are complex and dangerous environments”. says Ian Hannah, Co-Founder of Industrial Skyworks, Toronto, ON, Canada (https://industrialskyworks.com) “At the heart of hydrogen production, for example, is the ‘Radiant Box,’ an industrial furnace that reaches temperatures up to 4,000° F.”

Contained inside the Radiant Box are specialized pipes with high Chromium content designed to withstand such extreme temperatures. In operation, burners heat the tubes which then heat the steam-methane mix inside the pipes. In many vertical furnace designs, these 40 ft. tubes are placed approximately 1 ft. apart at a distance away from the refractory wall of the boiler so that a uniform temperature is maintained during production.

Recently, during the construction of a new Radiant Box at a large oil refinery, a possible manufacturing error was noticed in the construction of one of the pipes. The company required all the other 143 pipes used in the Radiant Box to be inspected, since even a small nick in a pipe could have disastrous consequences at such very high temperatures.

This would have been a straightforward task, except for the fact that the 40 ft. pipes were already installed in the building. The construction project was placed on hold until all the pipes could be assured to be free of defects. The traditional solution to this problem would be to erect scaffolding on each side of the box. To do this, the scaffolding would need to be coated with plastic to avoid any metal contact with the chromium alloy pipes.

This would have taken weeks of work and made more difficult because access to the building was extremely restricted through a small hatch measuring 2 ft. x 3 ft. leading to a very small walkway between three columns of pipes. Thus, the scaffolding would need to be entered piece by piece through the hatch and then assembled. 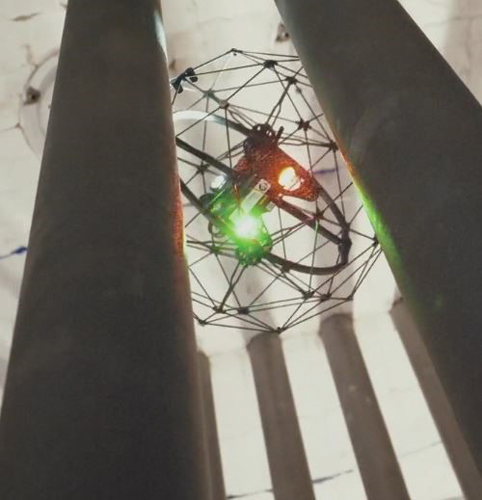 While white light LEDs are used in the drone to illuminate the pipes being inspected, like an aircraft, the drone features red LED lights on the port side and green LEDs on the starboard side so that the operator can understand the orientation of the drone as it flies.

Rather than take this approach, Industrial SkyWorks proposed a faster, more cost-effective solution. Using an Elios drone from Flyability (Paudex, Switzerland;www.flyability.com) equipped with a 1920 x 1080, 30 fps camera, it would be possible to capture video of all of the pipes safely without the need of scaffolding. These images are then recorded to an on-board SD memory card housed in the payload head of the drone. Image data can also be streamed to the operator at a lower resolution since the Elios drone integrates a Lightbridge 2 wireless controller from DJI (Shenzhen, China; www.dji.com). This allows images to be transmitted from the drone to the controller over a 2.4 GHz link frequency band.

“This wireless communication system does not require any special authorization to operate even in the most complex and confined spaces,” says Hannah, “and the maximum range of the drone is unimportant since it only operates a few hundred feet at maximum from the drone’spilot.”

“While white light LEDs are used in the drone to illuminate the pipes being inspected,” says Hannah, “it is important for the drone pilot to know the orientation of the drone as it flies.” Thus, like an aircraft, the drone features red LED lights on the port side and green LEDs on the starboard side (Figure 1b). The drone pilot can then capture images at known orientations, ensuring that all areas of the pipes in the Radiant Box areimaged.

In addition to displaying the live stream from the drone, Flyability’s Cockpit software displays live telemetry data with relative headings, altitude, and camera tilt orientation. To analyze the images being inspected from drones without cages, operators can use Industrial Skyworks’ own BlueVu inspectionsoftware.

“Traditionally, the problem with collecting large amounts of image data is that there have not been any tools to efficiently review and gain insight from these images. Instead, such analysis has involved manual, time consuming work,” says Hannah. To overcome this, BlueVu uses an optimization algorithm that automatically organizes, analyzes, and selects the most relevant images from these large datastreams. 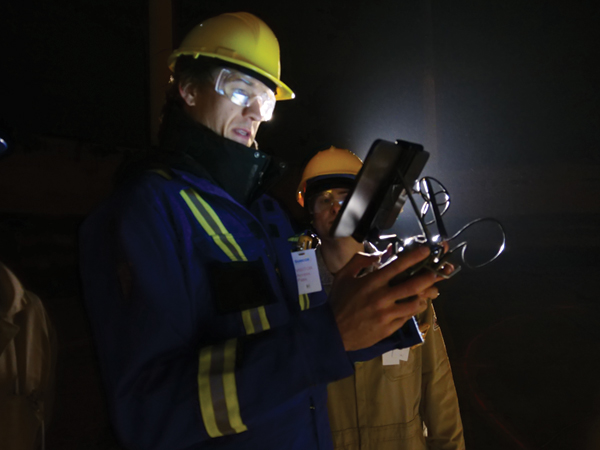 An operator pilots the drone in dark conditions.

When non-caged drones are equipped with microbolometer-based infrared cameras from FLIR Systems (Wilsonville, OR, USA; www.flir.com), BlueVu software can be used to identify problems such as energy leaks. In inspecting the pipes within the Radiant Box, the HD camera captured numerous visible images within the space of three days. In these images, the pipes can be visualized, as well as the main spar of the drone and its surrounding cage.

Although the drone’s camera incorporates a wide-angle lens with a horizontal field of view (FOV) of 130° and a vertical FOV of 75°, captured images were of sufficient resolution to identify any potential defects in the pipes.

“In 3Q 2019,” says Hannah, “Industrial Skyworks will be releasing an updated version of the BlueVu software that will use a neural network-based approach to automate the identification and classification of problems within images such as corrosion and cracks.”

By using the drone to capture images of the pipes within the Radiant Box, Industrial SkyWorks completed the inspection task required by the vendor within three days, after which the manufacturer was provided with HD images enabling them to determine the condition of each pipe. This meant that work at the facility could resume weeks ahead of schedule without the dangers of traditional methods—such as erecting scaffolding—that could have exposed workers to unnecessary risks.

According to Hannah, this approach was between 3-5 times less expensive than using conventional approaches. Interestingly, the new rules for non-hobbyist small unmanned aircraft operations included in Part 107 of the Federal Aviation Regulations, cover a broad spectrum of commercial uses for drones weighing less than 55 lbs. A summary of these regulations can be found on the Federal Aviation Administration (FAA) website (Washington, DC, USA;www.faa.gov) at http://bit.ly/VSD-FAA.

Unmanned aerial vehicles (UAV) and thermal cameras are being increasingly used by researchers for both wildlife detection and censusing. 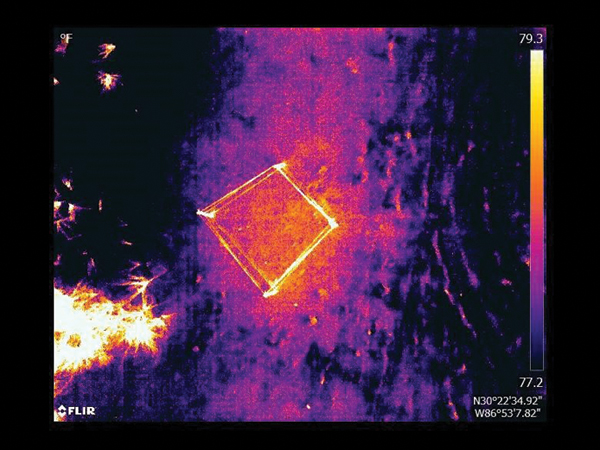 Working with the Navarre Beach Sea Turtle Conservation Center, Becker located two neighboring loggerhead sea turtle nests that were weeks from hatching. Attaching the camera to the drone, images of the nests were taken before sunrise at the rate of one frame per second. Images were captured as radiometric JPEG (RJPEG) data that have temperature data tagged to each pixel. To extract this data, the RJPEGs were downloaded to a PC and, using FLIR’s software, a list of temperature readings was extracted. In the aerial images, a temperature difference can be seen between nesting and non-nesting areas. More information can be found at:https://bit.ly/2QMaamK.

Longtime computer vision expert Dr. Takeo Kanade, U.A. and Helen Whitaker Professor at Carnegie Mellon University, presented the 'Think Like an Amateur, Do As an Expert: Lessons from a Career in Computer Vision,” at the 2018 Embedded Vision Summit.
James Carroll
May 2nd, 2019