Using high-speed cameras and custom software, researchers can effectively map the trajectory of mosquitoes around an insecticide treated bed net. 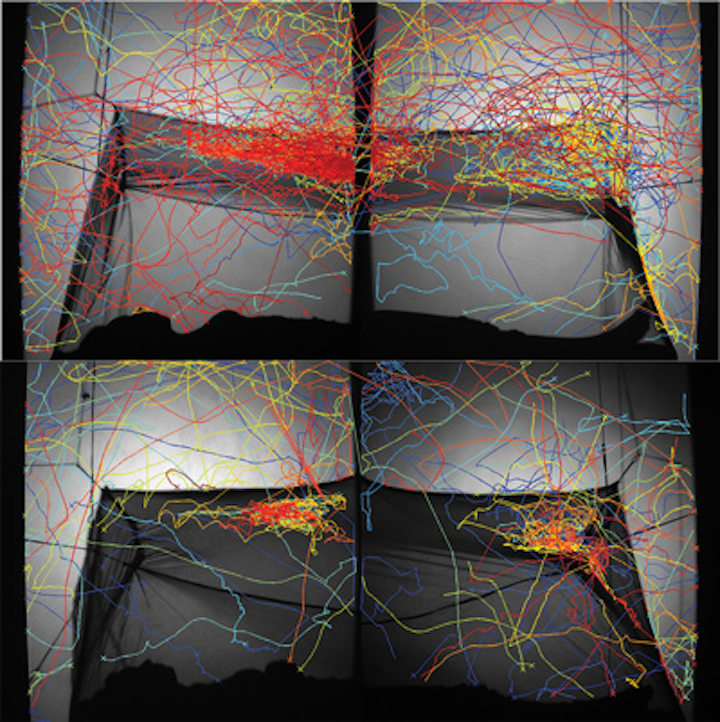 Malaria is a disease of the blood that is caused by the Plasmodium parasite, which is transmitted from person to person by the female Anopheles mosquito. Even though malaria can be treated, the World Health Organization (WHO) estimates that there were 438,000 deaths from malaria in 2014.

"Despite considerable success in combating malaria including the use of insecticide treated bed nets, new tools and interventions are still required to combat mosquitoes that evade current strategies or are becoming insecticide resistant," says Dr. David Towers, Professor of Engineering at Warwick University (Coventry, England; www2.warwick.ac.uk).

One of the means Dr. Towers and his colleagues Natalia Angarita and Catherine Towers at the University of Warwick and entomologists Philip McCall and Josie Parker at the Liverpool School of Tropical Medicine (LSTM; Liverpool, England; www.lstmed.ac.uk) aim to accomplish this task is to develop more effective bed nets.

This is the aim of a €12M research project called AvecNet (www.avecnet.eu) that uses high-speed imaging techniques to allow the researchers to better understand how mosquitoes interact with the insecticide treated bed nets. "Once this interaction is understood, it will then be possible to develop more sophisticated bed nets and evaluate new insecticides that will deliver lethal doses in a shorter period of time," says Dr. Towers.

To analyze the behavior of the mosquitoes, the researchers constructed a hut at a field site in Tanzania, Africa which mimics a typical house and the sleeping arrangements of the local population. Experiments are conducted at night when the residents are at greatest risk of being bitten by mosquitoes using nets with and without insecticide and with and without a person in a sleeping position under the net.

"Because mosquitoes are highly sensitive to light," says Dr. Towers, "it is necessary to illuminate the scene using near-infrared (NIR) light." To accomplish this, a single 850-880nm LED from Thorlabs (Newton, NJ, USA; www.thorlabs.com) was first placed behind a diffusing screen to evenly distribute the NIR light. Light from this diffuser was then collimated using a Fresnel lens to provide an effective 1.4 x 1.0 m field of view.

Since software capable of analyzing such a large number of images was not available at the beginning of the project, it was custom written to first identify and then track the motion of the mosquitoes. To identify motion, differences between successive frames were computed, the objects of interest segmented and the objects trajectory inferred by matching the regions of interest detected in consecutive frames. Once tracked, individual mosquito paths are pseudo-colored and superimposed over the image.

"Our research has shown that mosquitoes behave in a number of different ways when interacting with the bed net," says Dr. Towers. "In swooping mode they simply fly through the area while in visiting mode they make intermittent contact with the net and then take off. In resting mode, they become tired, rest on the net and - if they are there for more than 30s are killed by the insecticide. Perhaps what was not well known before this research is that most commonly the mosquitoes behave in a bouncing mode in which they will approach and then bounce across the net often multiple times."

From this knowledge, a Confidence in Concept grant from the Medical Research Council (London, England; www.mrc.ac.uk) has been awarded to the researchers to build an innovative new net that will prove more effective than current implementations. In the future, Dr. Towers and his colleagues plan to map not just the sleeping area, but the hut as a whole using eight cameras, collecting up to 10TBytes of data per hour. This will enable the team to fully map the behavior of the mosquitoes as they approach their targets.