Under certain conditions, stem cells can be induced to become other types of cell such as blood or muscle cells though a process known as differentiation. 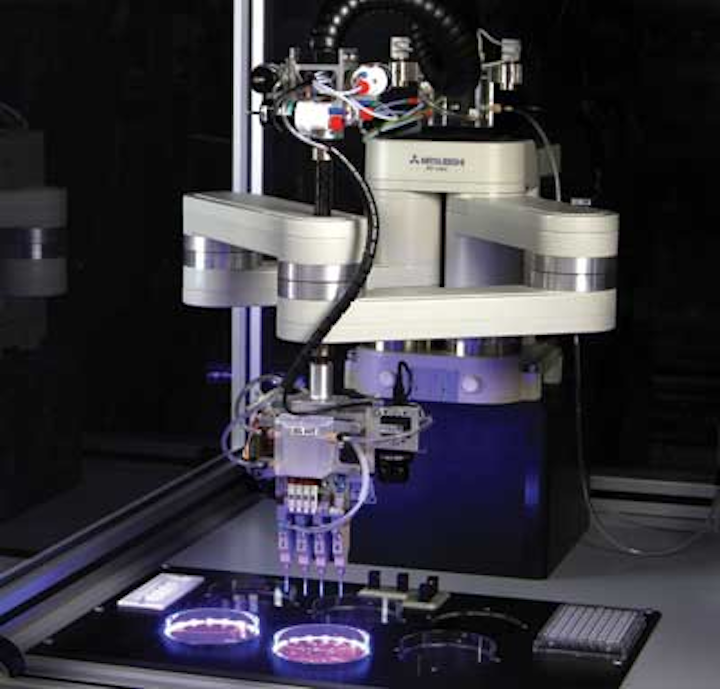 Coupling a robot with machine vision and laboratory automation software has resulted in a system that automates the picking of stem cells.

Under certain conditions, stem cells can be induced to become other types of cell such as blood or muscle cells though a process known as differentiation. Because of this, scientists and researchers can use them to regenerate diseased or damaged tissue.

To grow colonies of stem cells, single stem cells are extracted from tissue and transferred onto a Petri dish that contains a nutrient. This allows the cells to undergo numerous cycles of cell division and appear as tightly knit colonies, less than 1 mm across, that adhere to the bottom of the Petri dish. Each colony consists of identical stem cells.

As long as the stem cell colonies are grown under appropriate conditions, they remain undifferentiated. If two colonies grow together, such that they touch, it is not possible to pick a pure line of stem cells. These groups (resembling a figure of eight) and colonies that that have started to differentiate (that can be seen by changes in their shape) must not be selected for picking.

Only undifferentiated pure colonies of stem cells must be picked from the Petri dishes and transferred individually into a microtiter plate - a flat plate with 96 wells that act as small test tubes. Here, the stem cells can be further grown or processed to differentiate into specific cell types desired by the researchers.

In the past, the process of identifying undifferentiated stems cells on Petri dishes was carried out manually by trained operators who identified the cells under a microscope. However, there was a lack of consistency between the individuals who picked the cells from the plates and the chance that and the potential that operators might damage the colonies, pick the wrong ones, or pick multiple colonies.

To automate this process, engineers at paa (Peak Analysis & Automation, Farnborough, UK; www.paa-automation.com) in conjunction with the Wellcome Trust Sanger Institute (Hinxton, UK; www.sanger.ac.uk) have developed a vision-based robotic system called automate.it pixcell for the detection, isolation and picking of stem cell colonies from Petri dishes (Figure 1). After picking, the robotic system transfers the cells to wells in microtiter plates where they can be treated to create specific cell types.

To achieve their goals, extensive use was made of off-the shelf hardware and software. An RP-Series robot and robot controller from Mitsubishi Electric (Hatfield, UK; http://automation.mitsubishielectric.co.uk) was chosen to move a camera and four picking heads over the Petri dishes, while an image capture and analysis software package from Bio Image Systems (Jackson, MI, USA; www.bioimage.net) enables images of the Petri dish to be captured and undifferentiated pure colonies to be detected and mapped. The picking head itself, which ensures that the stem cells colonies are delicately picked from the dish without physical damage, was developed at, and licensed from, the Wellcome Trust Sanger Institute.

Scheduling and control of the hardware and software was performed using Peak Analysis & Automation's own custom Overlord3 software. This enabled the vision-based robotic system to control the flow of the entire automated process and to schedule the timing of events through the use of a drag and drop interface.

More specifically, the Overlord3 software acquires and processes image data from the camera and schedules the movement of the robot and the timing of cell picking and deposition. The software also controls the scheduling and timing of associated pneumatic, pumping and calibration operations performed through an I/O interface from the Mitsubishi robot controller hardware (Figure 2).

In operation, up to six Petri dishes containing stem cells cultures are transferred manually by an operator from an incubator and placed on picking plates within the enclosure of the machine. Prior to operation, the doors of the unit are closed to ensure that no contaminants can enter the system during the pick and placement procedure.

Beneath each of the picking plates, a ring of blue LEDs illuminates each Petri dish to highlight the location of the stem cell colonies growing in each of them. To capture an image of the cells in each plate, the robot arm is fitted with an Oscar F810-C camera from Allied Vision Technologies (Stadtroda, Germany; www.alliedvisiontec.com) that includes a 3272 x 2469 frame readout CCD sensor from Sony (Park Ridge, NJ, USA; www.sony.com) suited for capturing images in low light conditions.

Under instigation from the paa Overlord3 scheduling software, the 8Mpixel camera is moved into position above one of the Petri dishes by the robot arm, after which it captures an image of the cells in the plate. The image of the cells is then transferred over a Firewire interface to a PC housed in the system.

Here, the Bio Image Systems' software identifies the location of the cell cultures in the Petri dish and their morphology based on their shape factors. These are dimensionless quantities that numerically describe the shape of a cell, independently of its size. They are calculated from measured dimensions such as the diameter, perimeter, and area of the selected cell (Figure 3).

Having done so, the Bio Image software presents an image of the cells in the Petri dish to a user on a flat panel display. The user can then manually select the type and number of colonies to be picked from each Petri dish. Alternatively, the system can automatically select the most promising colonies from the plates based on their shape factor. After the colonies have been selected, their location is then stored on a local database in the system for further reference.

Once the colonies to be picked have been selected, the Overlord3 software running on the PC instructs the Mitsubishi controller to move one out of the four picking heads in the system into position above the Petri dish over an RS-232 serial interface. The picking head is then pneumatically lowered adjacent to a single colony in the Petri dish until it touches the bottom of the dish (Figure 4).

The Overlord3 software then instructs the Mitsubishi robot controller to actuate a pneumatic line on the head to aspirate, or draw, a colony of stem cells into the picking head. After all four of the picking heads have completed their tasks, the robot then lifts them clear of the dish and moves the heads over to wells in a microplate into which the cells are deposited.

In a final step, the Overlord3 software instructs the robot to move the picking head probes to a cleaning station in the unit before more colonies of stem cells are picked. This ensures that no colonies from previous picking operations are left in the probes. At the cleaning station, water is pumped through the heads into a waste unit beneath the cabinet that houses the system. After cleaning the probes are ready to pick another batch of colonies from the Petri dishes.

During routine maintenance, it may be necessary to replace one of more of the picking heads. Having done so, the system must be recalibrated to ensure that robot will move the probe to the correct position in the Petri dish. To do so, the system employs an LED sensor alignment system through which the probes are moved. The position of the picking heads detected by the sensors can then be compared to the known position of the robotic arm enabling any positional differences caused by the insertion of new probes to be compensated for in software.

The system ensures gentle handling of the stem cell colonies, improving the likelihood of them growing and thriving. It operates at a level of performance equal to or better than trained staff, picking up to 96 colonies in 15 mins with a placement accuracy of 0.005mm and a picking cycle time of less than 0.5 s.

In the future, such a system, or a derivation of it, might be used outside the world of stem cell picking, where automated the picking of microscopic objects with high resolution and accuracy might also be a fundamental requirement.