R.B. Toth Associates and Equipoise Imaging have recently partnered with Phase One A/S in the development of a multispectral imaging system designed for non-destructively analyze ancient artifacts. 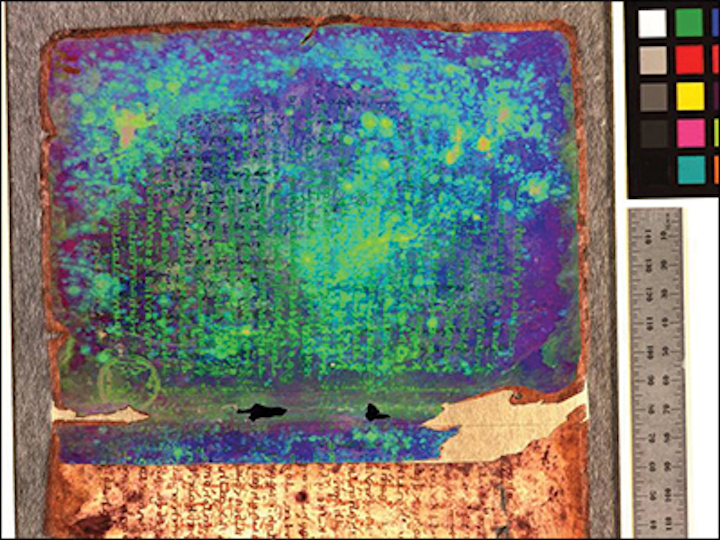 By analyzing the pigments of old paintings and inks of ancient documents, historians can determine how such artifacts can be restored, whether they may be forgeries and whether any underlying structures or text may be present. While chemical analysis can determine the molecular nature of the pigments, varnishes and inks used, such methods are invasive and in many cases cannot be used.

To perform this task, a number of companies now offer multispectral imaging systems that can perform this task non-destructively. Art Innovation (Enschede, The Netherlands; www.art-innovation.nl), for example, has developed a system specifically targeted to art historians that uses a multispectral camera for this purpose (see "Multispectral imaging targets art restoration," (Vision Systems Design, March 2015, http://bit.ly/1NxrLt0). By using a filter wheel to capture images at UV, visible and IR frequencies, and comparing color and fluorescence images, art historians can then visualize where specific retouching may have occurred.

Such techniques can also be used for digitization and digital imaging studies of parchment, paper and papyrus manuscripts. To meet these demands from libraries, museums and private collectors, R.B. Toth Associates (Oakton, VA, USA; www.rbtoth.com) and Equipoise Imaging (Baltimore, MD, USA; www.eqpi.net) have recently partnered with Phase One A/S (Frederiksberg, Denmark; www.phaseone.com) in the development of a multispectral imaging system specifically for this purpose.

Like the system developed by Art Innovation, R.B. Toth Associates' system uses a monochrome camera and filter wheel to capture images as they are illuminated at different spectral wavelengths. Generating a hypercube of these images then allows specific wavelengths to then be combined, subtracted or compared to reveal the underlying features of documents.

At the heart of the R.B. Toth Associates' system is the XF-IQ260 Achromatic camera system from Phase One. With an 8964 x 6716 achromatic CCD sensor, the camera is fitted with a high-resolution leaf-shutter lens from Schneider Kreuznach (Bad Kreuznach, Germany; www.schneiderkreuznach.com). Hereby the camera system delivers true 60MP resolution captures of the scene, lit sequentially by the different narrow bands of lighting.

"Because it is necessary for the system to capture images over a wide spectral range, the XF-IQ260 achromatic camera was chosen since it has a spectral sensitivity in the 350-1100nm range," says Michael B. Toth, President of R.B. Toth Associates. To capture images at different spectral frequencies, the system employs a custom motorized six-position filter wheel developed by Equipoise Imaging that contains clear, UV, visible and IR band pass filters.

Before images of documents can be captured, they must be illuminated uniformly at multiple wavelengths. To accomplish this, Equipoise Imaging developed custom flat LED panels that incorporate LEDs with 12 different frequencies of LEDs ranging from 370nm (UV) to 940nm (NIR). Two of these LED panels are then positioned at 45o angles to the document placed under the camera test stand. To obtain a hypercube image of the document, it is illuminated and images captured (without filtering) at 12 illumination frequencies.

"Although this can provide valuable information," says Toth, "both fluorescence emission and UV reflectance images are also required to allow characteristic spectra of substrate, colorant, and contaminant materials such as parchment, iron gall inks and mold, respectively, to be determined and analyzed."

To accomplish this, the document is illuminated with UV light and a UV blocking filter used to allow a UV fluorescence image to be captured. Similarly, three band pass filters in the visible spectrum then provide additional fluorescence spectral data. In the design of the system, a USB 3 interface is used to transfer images from the tethered camera, control the lighting and exposure and the motion of the filter wheel.

To automate the operation of multiple image capture at different exposures, lighting conditions and filter settings, Equipoise has developed a graphical user interface (GUI) that incorporates the Capture One camera control functions supplied by Phase One, the illumination and filter wheel controls, and the image processing tools found in Image J, an open-source software package developed at the National Institutes of Health (Bethesda, MD, USA; http://imagej.nih.gov).

"This," says Toth, "allows the user to perform multiple image scans automatically and to enhance non-visible features from the objects based on their spectral response in images captured using the full set of illumination wavelengths and emission bands."

Already, the system has found use in imaging a number of different treasured cultural objects from the antiquities including a page from a manuscript known as "Simple Drugs" written by Galen of Pergamon, a Greco-Roman physician who died in 200 A.D. The manuscript is known as a palimpsest, in which the older medical text had been scraped away and overwritten with hymns by 11th century Syrian scribes.

Located at the Bibliothèque nationale de France (BnF, Paris, France; www.bnf.fr), a leaf of the manuscript was scanned there by Dr. William Christens-Barry of Equipoise Imaging and Toth using the spectral system with the Phase One Camera integrated by Toth and Christens-Barry. Data from the scans is now freely available on the web (http://digitalgalen.net/Data/BnF-syr_382r/). The Galen project followed their pioneering work on the team that brought to light a digital version of the Archimedes Palimpsest. Spectral imaging of the earliest known copy of Archimedes' work revealed the unique mathematical texts in the manuscript that were scraped off and overwritten with a prayer book by Johannes Myronas in 1229AD.