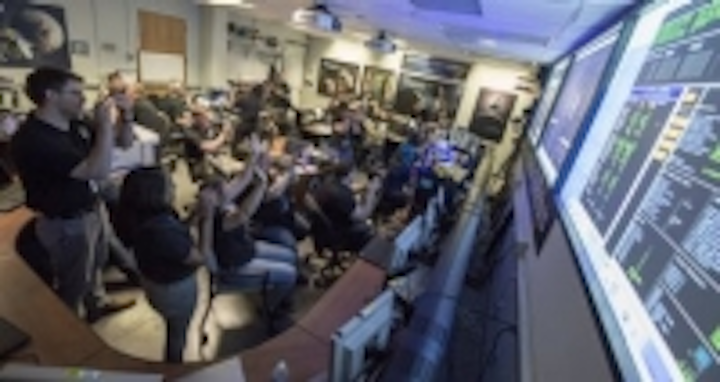 LORRI, according to NASA, is essentially adigital camera with a large telephoto telescope fortified for the cold, hostile conditions near Pluto. The imager has no color filters or moving parts, as operators take images by pointing the LORRI side of the spacecraft directly at a target. The instrument’s silicon carbide construction keeps its mirrors focused through extreme temperature dips that the spacecraft experiences on the way to, though, and past the Pluto system.

The imager was developed by the Johns Hopkins University Applied Physics Laboratory. Additionally, LORRI will provide the highest resolution images of any Kuiper Belt objects that New Horizons may encounter.

Following its flyby of Pluto, New Horizons "phoned home" just before 9 PM on July 14, to tell the mission team that it had successfully accomplished the first-ever flyby of Pluto. The preprogrammed “call” was a 15-minute series of status messages beamed back to mission operations at the Johns Hopkins University Applied Physics Laboratory in Maryland through NASA’s Deep Space Network, following a 21-hour waiting period. (Pictured above: New Horizons Flight Controllers react to the “phone call”). The spacecraft had been programmed to spend the day gathering the maximum amount of data, and not communicating with Earth until it was beyond the Pluto system.

"While this historic event is still unfolding --with the most exciting Pluto science still ahead of us -- a new era of solar system exploration is just beginning. NASA missions will unravel the mysteries of Mars, Jupiter, Europa and worlds around other suns in the coming years," said John Grunsfeld, associate administrator for NASA's Science Mission Directorate in Washington.

For NASA, this accomplishment ranks among the great achievements in space exploration.

"The exploration of Pluto and its moons by New Horizons represents the capstone event to 50 years of planetary exploration by NASA and the United States," said NASA Administrator Charles Bolden. "Once again we have achieved a historic first. The United States is the first nation to reach Pluto, and with this mission has completed the initial survey of our solar system, a remarkable accomplishment that no other nation can match."

From here, the spacecraft is expected to head farther into the Kuiper Belt to examine one or two of the ancient, icy mini-worlds in that vast region, at least a billion miles beyond Neptune’s orbit.