Industrial robotics and agricultural machinery are projected to expand by nearly 20% in the coming years, marking the two areas as the fastest-growing segments in the Chinese machinery business 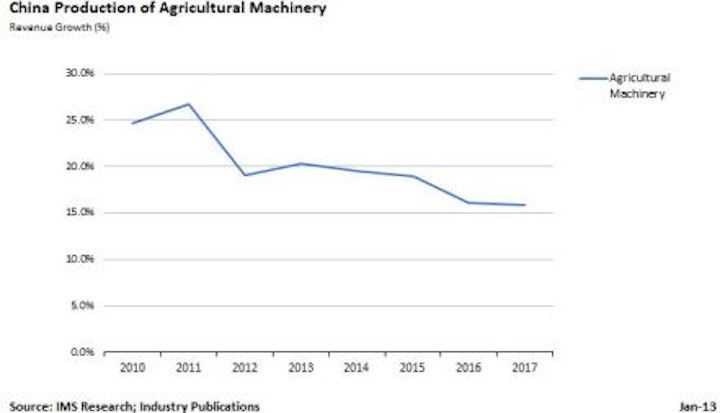 Industrial robotics and agricultural machinery are projected to expand by nearly 20% in the coming years, marking the two areas as the fastest-growing segments in the Chinese machinery business, according to an IHS press release.

China has put a focus on mechanizing agriculture as they strive toward urbanization. Agricultural mechanization should rise from 52% in 2012 to 60% in 2015, then to 70% in 2020 and 82% in 2030, according to the 12th Five-Year-Plan and the government’s stated objectives.

As a result of the country’s focus and their incentive policies and purchase subsidies, the production of agricultural machinery in China was estimated to be worth $57.9 billion in 2012, which is 19.1% more than in 2011. IHS predicts that it will continue to grow from 2013 to 2017 at a compound annual growth rate (CAGR) of 18.1%, faster than the average for all Chinese machinery production.

As the automobile market in China grows, so does the expansion of robotic machinery, which is estimated to be worth $589 million in 2012, up 22.6% from 2011. Manufacturers are being forced to automate for financial reasons (i.e. rising wages) in addition to the rising demand for higher-quality Chinese products in domestic and export markets. IHS predicts that the industrial robotics sector in China will grow faster than those of other industries from 2013 to 2017 at a CAGR of 18.8%.