With its Membrane Optical Imager for Real-Time Exploitation (MOIRE), DARPA is hoping to create a technology that would enable future high-resolution orbital telescopes to provide real-time video and images of the Earth from 22,000 miles above Earth. 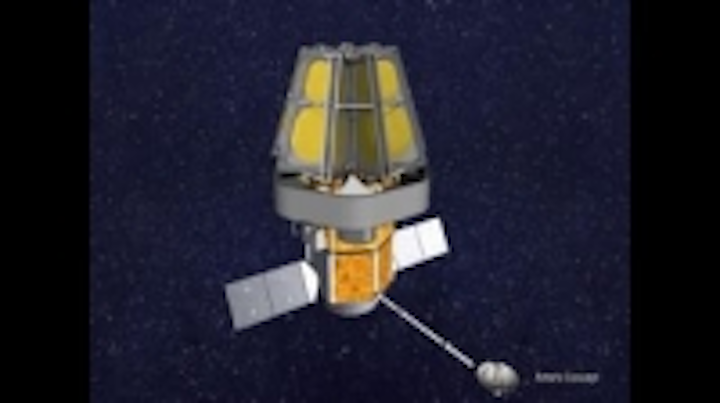 With its Membrane Optical Imager for Real-Time Exploitation (MOIRE), the Defense Advanced Research Projects Agency (DARPA) is hoping to create a technology that would enable future high-resolution orbital telescopes to provide real-time video and images of the Earth from 22,000 miles above Earth.

Thus far, size and cost constraints have prevented the placement of large-scale imaging satellites into Geosynchronous Earth Orbit (GEO, or 22,000 miles above Earth), according to DARPA. With the MOIRE program, orbital telescopes would become much lighter, more transportable, and more cost-effective. The program is currently in its final phase, having recently demonstrated a ground-based prototype which incorporated several technologies, including new lightweight polymer membrane optics, which replace the traditional glass mirrors used in existing telescopes.

In addition to the difference in size and weight, membrane optics also work differently than glass optics. While glass mirrors reflect light, MOIRE’s membrane optics diffract light. DARPA explains that the membrane is about the thickness of household plastic wrap, and each membrane serves as a Fresnel lens, as it is etched with circular concentric grooves like microscopically thin tree rings, with the grooves hundreds of microns across at the center down to only 4 µm at the outside edge. The diffractive pattern focuses light on a sensor that the satellite then translates into an image.

As a result, the successful deployment of membrane optics into GEO would have a significant impact, according to Lt. Col. Larry Gunn, DARPA program manager.

DARPA estimates that from GEO, a satellite using MOIRE optics could see approximately 40% of the Earth’s surface at once, and would be able to focus on a 10 km by 10 km area at 1-meter resolution, while providing real-time video at 1 fps.