A recent image captured by the NASA/ESA Hubble Space Telescope shows the P/2013 R3 asteroid crumbling and fragmenting into as many as ten smaller pieces, a sight that has never before been observed in the asteroid belt. 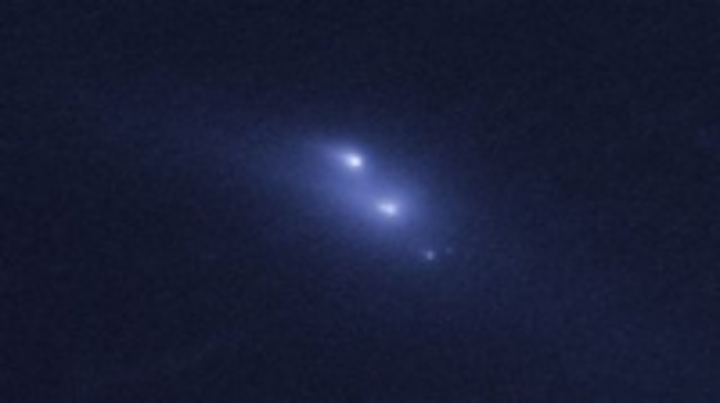 A recent image captured by the NASA/ESA Hubble Space Telescope shows the P/2013 R3 asteroid crumbling and fragmenting into as many as ten smaller pieces, a sight that has never before been observed in the asteroid belt.

Hubble’s wide field camera 3 (WFC3) captured images of the asteroid, which has fragments drifting away from each other at less than one mile per hour. Some of the fragments are more than 650-feet in radius, about twice the length of a soccer pitch. The asteroid began coming apart in early 2013, but the images show that pieces continue to emerge, according to an ESA press release.

"This is a really bizarre thing to observe – we've never seen anything like it before," says co-author of a paper on the investigation Jessica Agarwal of the Max Planck Institute for Solar System Research. "The break-up could have many different causes, but the Hubble observations are detailed enough that we can actually pinpoint the process responsible."

Researchers conclude that the asteroid is likely disintegrating due to a subtle effect of sunlight that causes the rotation rate to slowly increase over time. Eventually, the asteroid’s pieces begin to gently pull apart due to centrifugal force. The possibility of disruption by this phenomenon, known as the YORP effect, has been discussed for several years but never before reliably observed, said the ESA.