Researchers from the Fraunhofer Institute of Optronics System Technologies and Image Exploitation IOSB have developed a system that is capable of measuring the oscillatory pattern of a wind turbine from several hundred meters away. 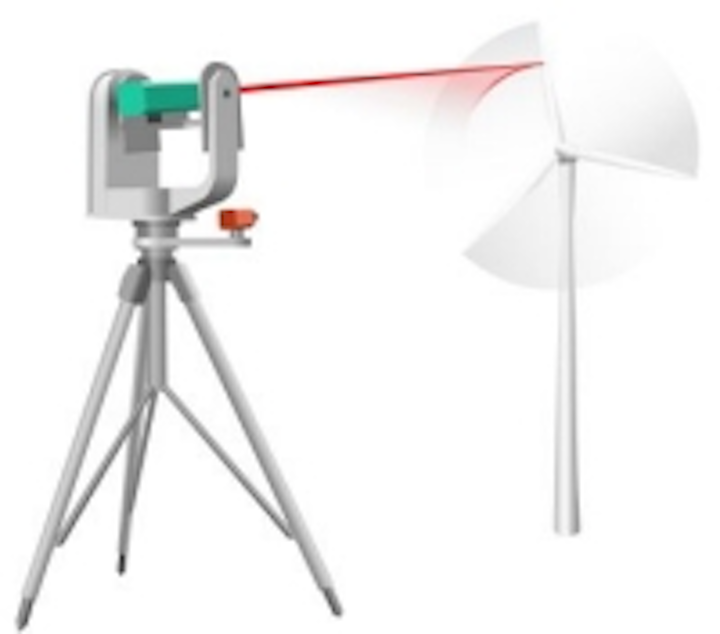 Researchers from the Fraunhofer Institute of Optronics System Technologies and Image Exploitation IOSB have developed a system that is capable of measuring the oscillatory pattern of a wind turbine from several hundred meters away.

Wind turbines oscillate with displacements of up to a meter in magnitude even at normal wind speeds, which can lead to damage or failure of an installation, says Dr. Ilja Kaufmann from the Optronics Department of IOSB in a press release. As a result, operators need to continuously check how strong the oscillations are by using sensors built into the mast and rotor blades—a technique that only provides measurements in the locations where the sensors are mounted, making a measurement of the oscillatory pattern of the entire system impossible.

With this in mind, Fraunhofer researchers developed a technology consisting of a laser and a camera on a pan and tilt head that is able to measure the patterns from several hundred meters away. A laser is directed at the installation that tracks the motion of the moving parts, such as the rotor blades, and a camera captures images of the installation and forwards them to a PC where software is used to process them and builds a model of the rotary motion from the data.

With this information, the pan and tilt head of the device is positioned so that the laser automatically follows the rotor blades and the camera simultaneously collects data about the exact position of the 2-3 cm laser spot on the rotor blade, in order to stabilize it on the revolving surface.

The Fraunhofer research team will display a prototype of the system at CeBIT 2014 in Hanover, Germany from March 10-14.