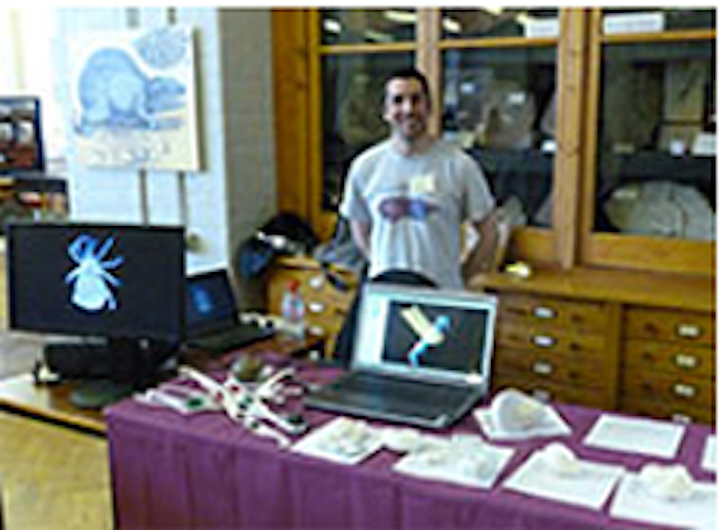 While most fossils are 2-D specimens, under unusual circumstances fossils can be preserved in 3-D. However, the most outstanding specimens are extremely rare and often very fragile. As such, they are not generally accessible to the public.

To enable members of the public to interact with these fossils, Dr. Imran Rahman of Bristol's school of earth sciences and his colleagues used Computed Tomography (CT) scanning to create digital models of a number of prehistoric invertebrates from well-preserved 3-D fossils. Highly detailed and accurate replicas of these original fossils were also created using a 3-D printing technique.

The models were displayed at an event at the Lapworth Museum of Geology (Birmingham, UK) earlier this year. Members of the public were able to interact with the computer reconstructions and view them on a screen with 3-D glasses. The 3-D prints of the fossils were also displayed and visitors were encouraged to handle them.

The interactivity of the virtual fossils made them effective for engaging the public, particularly young people, while the state-of-the-art technologies also appealed to adults who might not normally be interested in fossils.

The project, which was funded by the Natural Environment Research Council (NERC), is described in a paper 'Virtual Fossils: a New Resource for Science Communication in Paleontology' published in the journal Evolution: Education and Outreach.

Researchers at the University of Manchester and Humboldt University, Berlin have produced 3-D images of a prehistoric mite as it hitched a ride on the back of a 50 million-year-old spider.

A project led by researchers at the University of the Witwatersrand (Johannesburg, South Africa) has resulted in the production of the highest resolution x-ray scan ever made of the skull of a 1.9 million-year-old human ancestor.