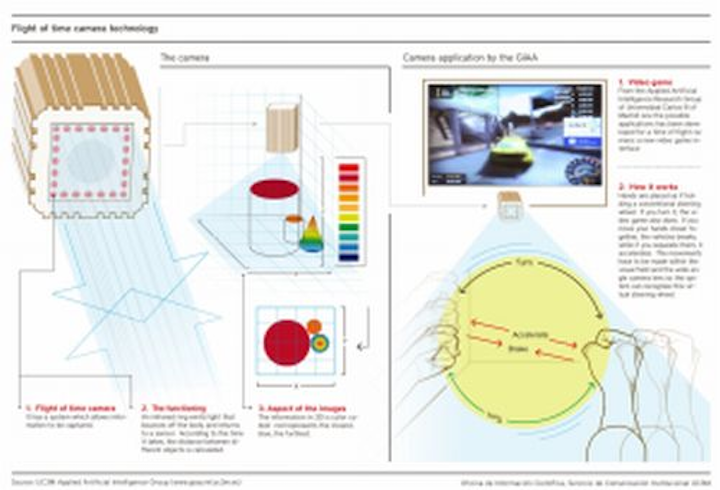 Researchers from the Group of Applied Artificial Intelligence (GIAA) on the Colmenarejo Campus of Universidad Carlos III de Madrid (UC3M) have presented a vision application at the latest Salón Internacional de Material Eléctrico y Electrónico, recently held in Madrid. The participants at the stand of Infaimon, which is collaborating on this project, test time of flight (TOF) cameras with a video game, operating it by moving hands as if holding a virtual steering wheel.

The researchers employed a TOF camera to capture 3-D movements and transmit them a computer, which then processes and transmits them to the game’s car. "The most complicated part was determining the camera’s characteristics to be able to optimize movement and its integration with many different applications,” noted researcher Daniel Sánchez.

The great advantage of this type of camera is that it offers three-dimensional information without having to resort to the classic stereoscope systems of two lenses. "These new sensors offer in-depth information, which is of great interest when working with artificial vision systems,” remarked Miguel Ángel Patricio, who coordinates this research from the Department of Informatics at UC3M.

The functioning of the TOF camera is relatively simple: an infrared LED light ring emits light that is reflected from the body and recorded when it returns to the sensor. According to the time this process takes, the distance between these objects can be calculated. "Our idea,” Patricio points out, “is to be able to apply this sensor to different problems on which we are currently working, such as video surveillance systems, biometric face identification, analysis of player movement in sports performance, and man-machine interfaces.” 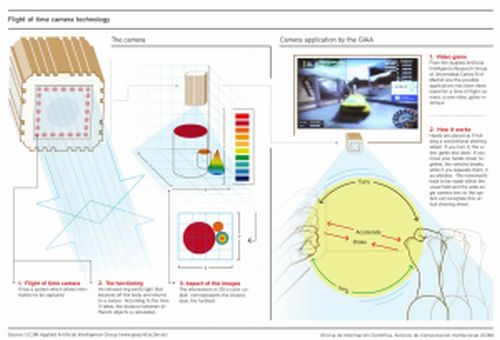 The researchers are now focusing their efforts on analyzing information that is obtained using TOF sensors. "I am convinced that their use will revolutionize artificial vision systems in the future, because the data obtained are much richer than that obtained through otraditional sensors,” asserted Patricio, who points out that more widespread implementation await lower prices, as TOF cameras now cost approximately 6,000 euros per unit.

The current challenge facing these scientists is applying TOF camera potential in various fields. In medicine, for example, with this type of sensor an automatic rehabilitation system could be created that can guide patients in exercises without having to leave home. The researchers also collaborate with INEF (Spain’s National Sport Institute) in the development of criteria for analyzing childhood obesity using a TOF camera, which up to now has been done with laser. Applications also include "affective computing” through the design of human-computer interface applications that attempt to examine a person’s mood through the application of algorithms that analyze information from such cameras.