An international team lead by University College London (UCL) researchers has developed a non-destructive multimodal imaging technique that utilizes multispectral imaging and a range of other imaging methods to reveal text from ancient Egyptian mummy cases for research and analysis. 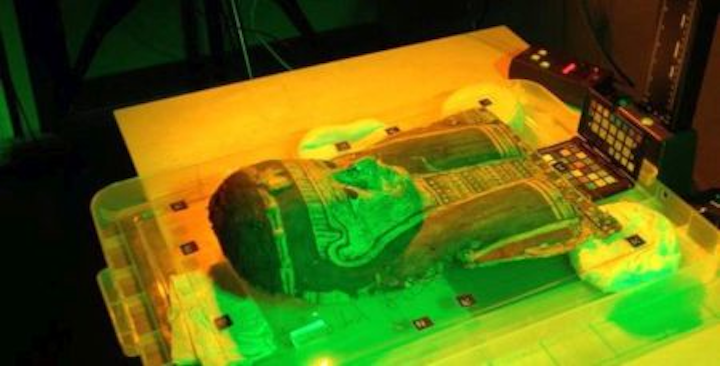 UCL notes that the massive finding of papyri in Egypt between the end of the 19th and the beginning of the 20th century has dramatically increased our knowledge of the ancient world, but by using advanced imaging techniques, the potential exists to dramatically improve the study of papyri encapsulated in ancient artifacts and potentially solve the problem of invasive, destructive approaches to these remains.

Working with a range of international partners and collections between November 2015 and December 2017, the pilot project tested the feasibility of non-destructive imaging of multi-layered Papyrus found in Egyptian mummy cartonnages.

First, the team describes the approach it took while utilizing multispectral imaging technology. Multispectral imaging, notes UCL, can be used to analyze the colors of objects and has been show to highlight otherwise illegible details in items such as the Archmides Palimpsest, the Syriac Galen Palimpsest, and Livingstone’s diaries. Provided by RB Toth Associates, the system utilizes an IQ260 achromatic camera from Phase One, which has a 60 MPixel CCD image sensor with a 6 µm pixel size and produces true black and white imagery. With this, a filter wheel with five long-pass filters and computer-controlled lighting with 12 different wavelengths from ultraviolet to near-infrared was used, which was supplied by Dr Bill Christens-Barry of Equipoise Imaging LLC.

In addition to the multispectral camera, the team of researchers utilized optical coherence tomography (OCT), which uses similar wavelengths to multispectral imaging, but works at a much smaller scale, according to UCL. The system is arranged so that light travels a similar distance along two paths, one a reference arm and the other interrogating the sample. As light penetrates the sample and reflects back off different layers, the distance it travels changes. This change in distance is measured precisely using interferometry. It can image to depths of around a millimeter and give micrometer resolution, thus making it suitable for imaging layered structures, according to the team, which says that OCT—while still experimental in it is use for imaging historical manuscripts—could be a valuable addition to their imaging options.

Terahertz imaging, which uses electromagnetic waves which are longer than visible waves, can penetrate further through dry, insulating samples than visible waves, but are attenuated by water and metals, noted UCL. In dry samples such as mummy cartonnages, the team expects to be able to penetrate by 1 cm or more, potentially allowing them to see through plaster, cloth, or other coverings. Like OCT, its application to imaging manuscripts is experimental, but some early results in cultural heritage, including manuscripts have been reported.

Other imaging techniques utilized by the team include:

Research found that no current single imaging technique was able to identify both iron and carbon-based inks at depths within cartonnage, so the team developed a multimodal approach. While the system has limitations that include cost, access to imaging systems, and the portability of both the system and the cartonnage, the results led to an understanding of which imaging methods are worth pursuing in future research projects.

One of the first successes of the new technique, according to BBC News, was on a mummy case kept at a museum at Chiddingstone castle in Kent, UK. The researchers identified text written on a footplate not visible to the naked eye by using the imaging techniques, which revealed the name "Irethorru" – a common name in Egypt which meant "the eye of Horus is against my enemies.”

Dr. Kathryn Piquette, of University College London, commented on the research in the BBC article: "I'm really horrified when we see these precious objects being destroyed to get to the text. It's a crime. They are finite resources and we now have a technology to both preserve those beautiful objects and also look inside them to understand the way Egyptians lived through their documentary evidence - and the things they wrote down and the things that were important to them."

View more information on the research.
View a BBC article on the findings.