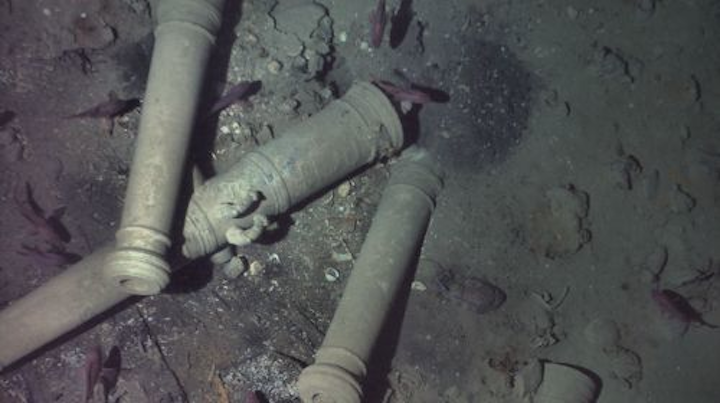 Researchers from the Woods Hole Oceanographic Institution (WHOI) were recently granted permission to release details from the discovery of the three-century old San José shipwreck using a vision-guidedautonomousunderwater vehicle (AUV).

The San José was a 62-gun, three-mast Spanish galleon that sank during a 1708 battle with British ships in the War of Spanish Succession. Often referred to as the “holy grail of shipwrecks,” the San José went down with a treasure of gold, silver, and emeralds believe to be worth as much as $17 billion. The ship was discovered on November 27, 2015 off the coast of Cartagena, Colombia, but the WHOI team needed to obtain authorization by Maritime Archaeology Consultants (MAC), Switzerland AG, and the Colombian government to release details, which they recently received.

A team of international scientists and engineers on an expedition aboard the Colombian Navy research ship ARC Malpelo led by MAC’s Chief Project Archaeologist Roger Dooley found the ship more than 600 m below the surface during a search initiated by MAC and approved by The Colombian Ministry of Culture. Key to the discovery of the ship was working with Woods Hole Oceanographic Institution, which he said, “has an extensive and recognized expertise in deep water exploration.”

To search for and eventually discover the shipwreck, WHOI initially deployed the REMUS 6000 AUV off the Malpelo to survey an area in June 15. A search area was divided into blocks, and in the initial blocks surveyed, the shipwreck was not found. Due to time constraints, the entire area of search blocks could not be completed during the first expedition, so the team returned in November to complete its search. It was then, according to WHO engineer and expedition leader Mike Purcell, that the team got the first indications of the find from the side scan sonar images of the wreck.

"From those images, we could see strong sonar signal returns, so we sent REMUS back down for a closer look to collect camera images,"he said.

To confirm its identity, REMUS descended to just 30 ft. above the ship, where it captured photos of a key distinguishing feature of the ship, its cannons. Subsequent missions at lower altitudes, according to WHOI, showed engraved dolphins on the bronze cannons.

"The wreck was partially sediment-covered, but with the camera images from the lower altitude missions, we were able to see new details in the wreckage and the resolution was good enough to make out the decorative carving on the cannons," said Purcell. "MAC’s lead marine archaeologist, Roger Dooley, interpreted the images and confirmed that the San José had finally been found."

Additionally, it has multiple navigation units, including an inertial navigation unit, acoustic doppler current profiler, and a pencil-beam sonar collision avoidance system. It is also equipped with numerous communications devices. It uses acoustic navigation to independently survey an area while the sensors sample and record data. Once data from a survey is analyzed and smaller fields of interest are identified, the REMUS 6000 can gather more detailed, up-close images using high-resolution imaging systems located on the bottom of the vehicle, according to WHOI. REMUS 6000 was designed under a cooperative program involving the Naval Oceanographic Office, the Office of Naval Research, and WHOI, in support of deep-water autonomous operations.

Discovering the San José, according to WHOI, carries considerable cultural and historical significance for the Colombian government and people because of the ship’s treasure of cultural and historical artifacts and the clues they may provide about Europe’s economic, social, and political climate in the early 18th century. The Colombian Government plans to build a museum and world-class conservation laboratory to preserve and publicly display the wreck’s contents, including cannons, ceramics, and other artifacts.