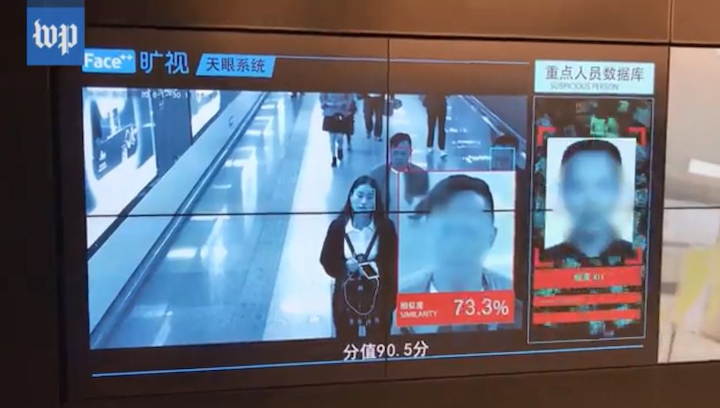 The latest example of this is in Nanjang, China, where police used facial recognition technology to locate a 31-year-old suspect in a concert crowd of nearly 60,000 people. The man, identified only by the surname of Ao, was reportedly wanted for "economic crimes," according to Kan Kan News. Details about Ao, reported Kan Kan News, were in a national database, and when he arrived at the stadium, cameras at the entrances with facial recognition capabilities had identified him and flagged authorities.

"He was completely shocked when we took him away," police officer Li Jintold Xinhua news agency. "He couldn't fathom that police could so quickly capture him in a crowd of 60,000."

Ao’s capture is the latest example of China’s growing use of facial recognition technology. Law enforcement and security officials in China, according to The Washington Post's Simon Denyer, aim to use such technology to track suspect and even predict crimes.Ultimately, officials in China want to create a national surveillance system known as "Xue Liang," or "Sharp Eyes" to monitor the movements of its citizens.

If you thought the Facebook data fiasco was concerning, the database that law enforcement in China is using takes it even further. A vast database of information on every citizen referred to as a public security police cloud infrastructurewas implemented to gather information on criminal and medical records, travel bookings, online purchase and even social media comments — and link it to everyone’s identity card and face, according to The Washington Post.

When Denyer visited three technology companies in China, he was shown people monitoring cars and people as they passed through an intersection and attached to each entry were text bubbles that showed information including the person’s gender and hometown.

The Washington Post article goes on to note that Humans Right Watch has a page dedicated to mass surveillance and the use of "big data" in China, and how it violates privacy rights and enables officials to "arbitrarily detain people."

Facial recognition technology, it could be argued, was always destined to present such problems. Ever been creeped out by Facebook suggesting you tag a friend or family member in a photo that is not yet tagged? Plenty of people have. How do you suppose someone in that situation feels about the ability of a system to find a person in a dark concert in a stadium full of tens of thousands of people?

However, a quick Google News search or even a conversation amongst your friends or family will likely show that there is still some trepidation when it comes to the technology. Still, with a story like this one in Nanjang, China—it has become increasingly difficult to deny its effectiveness.

View The Washington Post article.
View a video of the police apprehending the suspect.