Detecting and classifying compounds in material samples is the role of x-ray microanalysis. Today, x-ray analyzers are computer-controlled, rapidly obtain digital images from x-ray microscopes, and perform chemical analyses of microscopic regions of samples under inspection. Because of rapid advances in computer technology, such systems must be rapidly upgradable, allowing them to cut costs and reduce performance. To do so, designers are using off-the-shelf buses and boards in their designs. 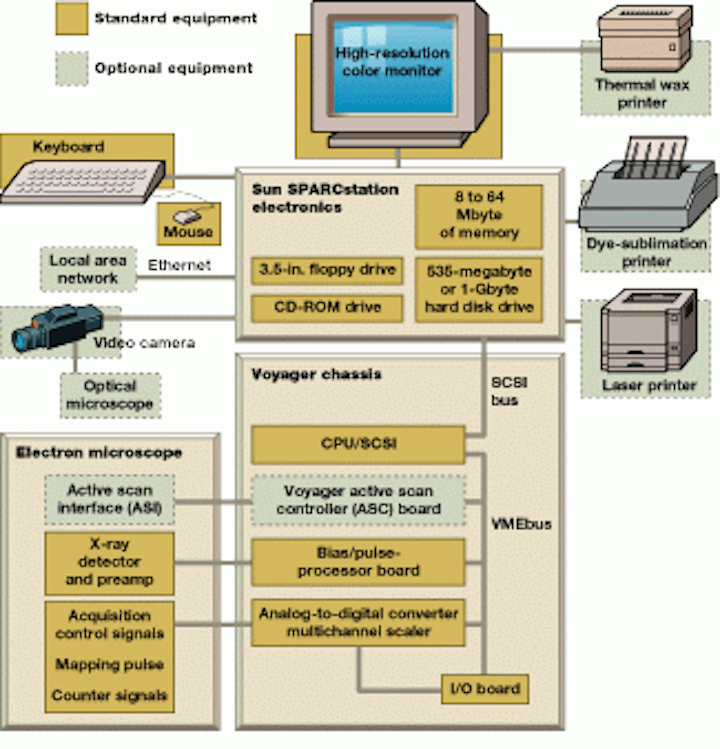 Detecting and classifying compounds in material samples is the role of x-ray microanalysis. Today, x-ray analyzers are computer-controlled, rapidly obtain digital images from x-ray microscopes, and perform chemical analyses of microscopic regions of samples under inspection. Because of rapid advances in computer technology, such systems must be rapidly upgradable, allowing them to cut costs and reduce performance. To do so, designers are using off-the-shelf buses and boards in their designs.

At Noran Instruments (Middleton, WI), designers chose a VME bus system (for data acquisition and control) coupled to an integrated Sparcstation from Sun Microsystems of Mountain View, CA, (for the user interface, communications interface, image processing, storage, and LAN connectivity) as the basis for its Voyager System. An x-ray microanalyzer, the Voyager system connects to an electron microscope to obtain, analyze, and store digital images acquired from x-ray detectors."We have had good success with the system as a result of an original design that permitted us to incorporate improvements made by our suppliers as the technology progressed," says Matt Humphreys of Noran.

Successfully leveraging off the skills of one`s suppliers requires foresight. By choosing a modular design for its system, Noran could effectively redesign portions of the system on an on-going basis. "The use of a high-performance bus gave us plenty of room for growth," says Humphreys. "The choice of a popular bus has given us a group of potential suppliers, documentation, availability of specialist staff, and availability of test equipment at reasonable cost."

Noran`s Voyager chassis contains a MVME 147 010 SBC from Motorola (Tempe, AZ) and a number of custom VME cards (see Fig. 1). These custom-developed VME boards control the location of the microscope beam, digitize the signal from the microscope, and process data from the x-ray detectors. Humphreys says that as memory prices fell and processors became faster, Motorola made improved versions to the MVME computer board line. "Because they paid close attention to issues involving compatibility with previous versions, we can use the new versions, with nearly no re-engineering costs of our own."

An I/O board contains several serial channels and a 16-bit parallel channel that are presented as device ports on the VME bus. The I/O board controls other laboratory equipment that may be configured in the system. Motorola`s MVME147-010 CPU functions as the subsystem controller. It receives requests from the workstation, coordinates tasks between other boards, and returns results to the workstation.

The CPU runs the Microware (Des Moines, IA) OS-9 real-time operating system. "We are running a half-dozen or so major real-time processes on OS-9 and several minor ones, depending on customer configuration. It has been solid, flexible, predictable, and economical," says Humphreys.

The Voyager system processes x-ray signals to obtain the energy of each x-ray event and increments a memory counter for that particular energy," says Humphreys. The result is essentially a graph. The x-axis is x-ray energy, and the y-axis is the number of x-ray events that occurred with that energy.

Voyager also performs complex sequencing and correlation of the electron-beam position with the detection of x-ray events. Voyager supplies these data to the UNIX workstation over a SCSI bus. The workstation then processes the data and presents the operator with displays such as false-color maps of the varying chemical composition of the sample.

Simple and complex transformations of the microscope image such as contrast, sharpness, edge enhancement, and particle recognition are also performed by the workstation. Voyager uses Motif, an interface that is widely used on UNIX-based equipment. Main windows showing spectral display, image display, and line-scan display each contain controls for acquisition, analysis, and printing.

The system can be configured by using applications software such as spectral matching, film layer analysis, critical dimension measurement, grain boundary reconstruction, or feature sizing. Many different software tools are available that cover surveying, measurement, and automation. Typical of the surveying tools is the spectral match (see Fig. 2).This can be used to identify and classify unknown compounds by comparing trace-element concentrations to a database of standards.

A software tool called Ultimap is used for rapid-frame-rate x-ray mapping (see Fig. 3). With the software, elemental areas of interest can be found on a sample. When coupled with the Pulstar digital pulse processor, the software can provide high intensity maps.

Dave Wilson is a science writer in London, England.

FIGURE 1. Inside the Voyager chassis a Motorola CPU card controls a number of custom VME designs under the real-time control of Microware Systems` OS-9. These custom-developed VME boards control the location of the microscope beam, digitize the signal from the microscope, and process data from the x-ray detectors

FIGURE 2. Spectral Match identifies and classifies unknown compounds, such as the boron silicate glass samples shown, by comparing trace-element concentrations to a database of standards defined by the user.

FIGURE 3. Ultimap is used for rapid-frame-rate x-ray mapping. With the software, elemental areas of interest can be found on a sample. When coupled with the Pulstar digital pulse processor, the software can provide high-intensity maps in a short time. Ultimaps acquired in 89 seconds are shown in the bottom row, while conventional maps acquired in 6 minutes are shown in the top row.

Matching the detector to the application

Noran`s added value may not be in the design of computer systems, but in the development of detectors that attach to and the software that runs on the Voyager system. These detectors sense x-rays produced with characteristic energies when an electron beam strikes a sample in the microscope. They come in two versions: those that are made from Si (Li)(lithium drifted silicon(and those that are made from HPGe (high-purity germanium). Users can have a choice of crystal active area, resolution, and window material.

Noran makes different types of detectors called the Pioneer, Explorer, Extreme, and Freedom. They can all be attached to the Voyager system, depending on the application. Detectors are chosen for a particular application, depending on the spectral quality, resolution, and collection efficiency that is required. The detectors collect numbers of events, and the results are displayed on a screen. Counts at one specific energy level (measured in keV) give a peak on screen, indicating that a particular element exists in the sample.

Freedom is one of many detectors that can be interfaced to the Voyager system. Noran`s Freedom x-ray detector can operate continuously without the need for a nitrogen coolant, unlike some of its counterparts.

In the design of its original Voyager workstation, Noran used the Motorola (Tempe, AZ) MVME-133 CPU VME card. Additional memory and a SCSI bus interface were provided using two additional VME cards. But when Motorola introduced the MVME-147 card, Noran reduced board count and raised system reliability by using the MVME-147I`s built-in memory and SCSI interface. Switching to the MVME 147 was a simple part substitution. Matt Humphreys of Noran says that the availability of compatible cards with built-in Ethernet provided a significant advantage in terms of cost and performance.

Other parts of the system also have been upgraded. The pulse processor card is one example. It provides power to the detector and preamplifier and receives analog data signals in return. The pulse processor card determines when an x-ray has hit the detector and samples the reflected energy. "The original version of this card contained a lot of analog circuitry for pulse shaping, filtering, and sampling. An analog level was passed to the corresponding ADC/MCS card as an analog signal," says Humphreys.

In a more-recent digital version, called the Pulstar, the signal from the preamplifier is conditioned, digitized at high rates, sent to three Motorola 96002 digital signal processors for information extraction, and the (digital) results passed on. "We simply replaced one set of VME cards with another. Had the underlying structure been less modular, the effort would have been greater," says Humphreys. By digitizing the signal from the detector preamplifier, Pulstar processes at a much higher count rate than conventional analog systems. Detector throughput is maximized without compromising the resolution, which is an advantage, especially when acquiring data from light elements.