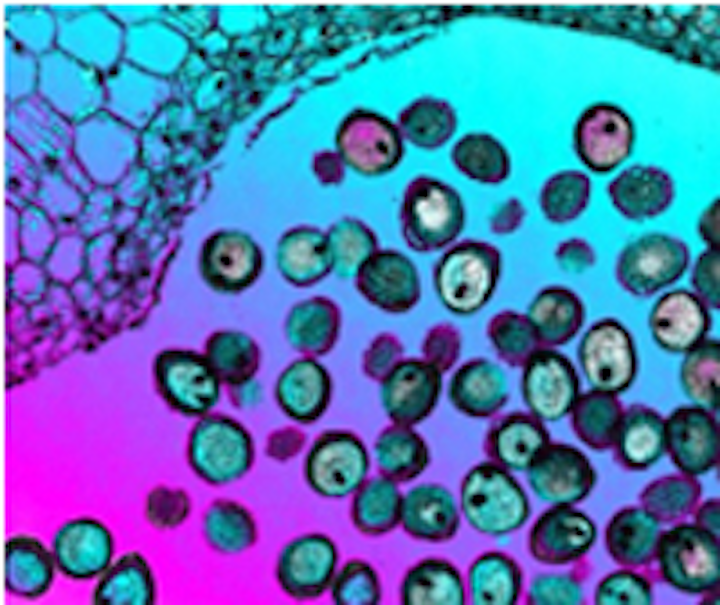 For over 70 years, transmission electron microscopy (TEM) has been constrained by the relatively poor lenses which are used to form the image.

The new method, called electron ptychography, dispenses with the lens, creating images using the diffraction pattern that is generated when an illuminating beam passes through or is reflected from an object.

Diffraction is the apparent bending and spreading of waves when they meet an obstruction. It can occur with any type of wave including sound waves, water waves, and electromagnetic waves such as visible light, x-ray and radio waves.

In the electron ptychography technique, a series of diffraction patterns is recorded as an illuminating beam moves over a user-defined region of interest on the specimen. A novel computer algorithm then processes the diffraction patterns to display images reconstructed from the complex wavefunction (amplitude and phase) that emanates from the chosen area of the specimen.

Two output images are created. A so-called TruWave Magnitude Image is a quantitative measure of how much of the illumination is transmitted through (or reflected from) the specimen and is similar to a conventional brightfield microscope image, while the TruWave Depth Image is a quantitative image showing how much the specimen changes the phase of the illumination as the wavefront passes through, or is reflected by, the specimen.

The new method disposes of the need to put a lens very close to a living sample, meaning that cells can be seen through thick containers like petri dishes or flasks. This means that as they develop and grow over days or weeks, they do not have to be disturbed.

Phase Focus (Sheffield, UK), a University of Sheffield spin-out, has been formed to bring the software algorithm to market. While the technology is in principle applicable to the entire electromagnetic spectrum, Phase Focus’s initial efforts are directed towards applications in optical, electron and x-ray microscopy.