Researchers at Rice University (Houston, TX, USA) have developed a new type of paint made with carbon nanotubes that could be used to help detect strain in buildings, bridges and airplanes. 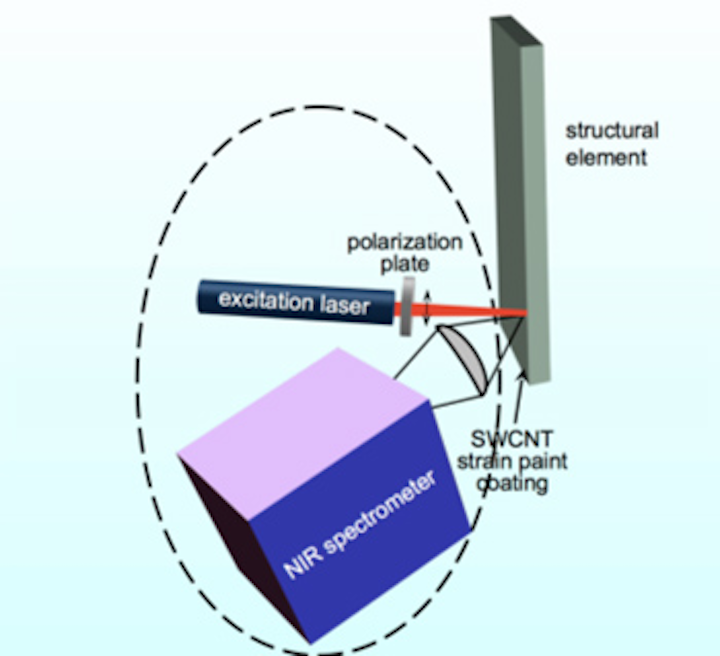 Researchers at Rice University (Houston, TX, USA) have developed a new type of paint made with carbon nanotubes that could be used to help detect strain in buildings, bridges and airplanes.

The so-called "strain paint" is a polymeric varnish into which the researchers dispersed the carbon nanotubes. Once applied onto a surface and allowed to cure, a laser beam can then be shone onto the surface of the material which excites the nanotubes that are in the thin film of varnish.

Since the spectral emissions from the nanotubes varies as a function of how much strain is applied to them, the strain on the surface of the material can be deduced by examining the spectral positions of the emissions by using a handheld infrared spectrometer.

The researchers said their technique provides an advantage over conventional strain gauges, which must be physically connected to read-out devices. In addition, the nanotube-based system could measure strain at any location and along any direction, highlighting where a structure is showing signs of deformation well before the effects become visible to the naked eye.

Rice chemistry professor Bruce Weisman said the coating will need to be developed further before a product can go to market. "We'll need to optimize details of its composition and preparation, and find the best way to apply it to the surfaces that will be monitored," he says.

But none of those problems seem insurmountable, he adds, and construction of a handheld optical strain reader should be relatively straightforward since many compact infrared spectrometers, miniature lasers and optics are readily available.

Support for the research was provided by the National Science Foundation, the Welch Foundation, the Air Force Research Laboratory and the Infrastructure-Center for Advanced Materials at Rice.