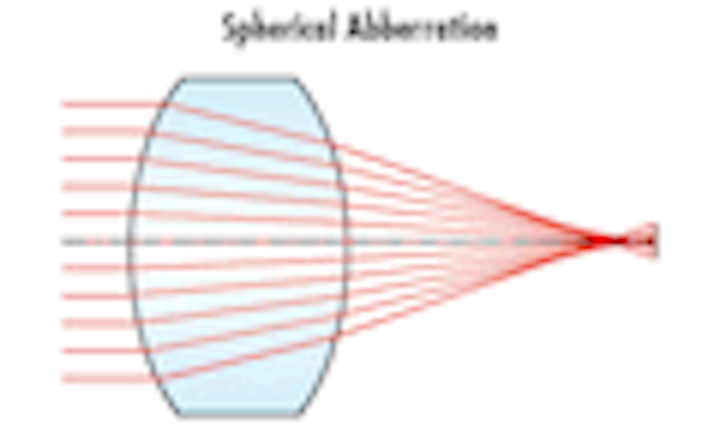 Spherical aberration refers to rays focusing at different distances depending on where across the aperture they meet the lens, and is a function of aperture size. The steeper the angle of incidence light has on the surface of a spherical lens, the greater the error in how the lens will refract the light (Figure 1). Lenses with large apertures (small f/#s) are more likely to have spherical aberration negatively impact the image quality. If a lens has a lot spherical aberration, image quality can be improved by increasing the f/# by closing the iris, but there is a limit to how much this will improve image quality. Closing the iris too much will cause diffraction to limit the performance (see Diffraction Limit). Optical designs that include high index glass or additional elements can be used to correct for spherical aberration in a fast (small f/#) lens; these designs will reduce the amount of refraction at each surface and, with it, the amount of spherical aberration. However, this can cause increases in the size, weight, and cost of the lens assembly. 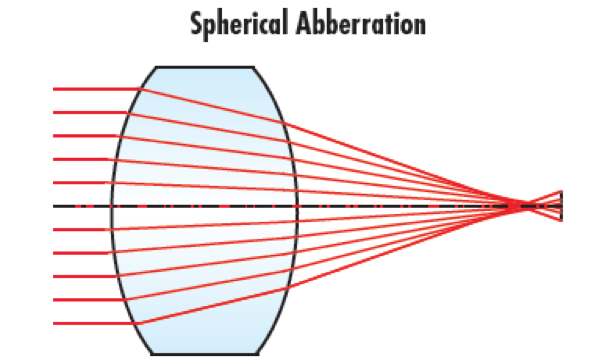 Figure 1: Example of Spherical Aberration. The Light Incident near the Edges of the Lens come to Focus too Early

Astigmatism is a function of ­field angles. To summarize, astigmatic aberration occurs when a lens has to perform over a wide ­­field, but the performance in the direction of the ­­field is reduced compared to the performance orthogonal to the ­field. If one looks at a series of bars that are half horizontal and half vertical, the bars in one direction will be in focus, but the bars in the other direction will be out of focus. This is caused by the fact that rays away from the center of the object do not pass through rotationally symmetric surfaces like the on axis rays do (Figure 2). To correct this, two things need to be done: have symmetric designs about the aperture and have designs with low angles of incidence for the­ field rays. Keeping a design symmetric leads to forms that are similar to a double gauss lens. Keep in mind that symmetric designs prevent the use of telephoto or reverse telephoto designs, which can cause long focal length designs to be large and short focal length designs to have small back focal lengths. Reducing the angles of incidence, much like one does for spherical aberration, requires higher index glasses and additional elements, leading to an increase in size, weight, and cost of the lens. The simplified definition used here intentionally combines the effects for astigmatism and coma for ease of understanding.

Field curvature is the aberration that describes the magnitude to which the image plane wants to be naturally curved. This aberration is caused by the sum of the focal lengths of the lens elements in the system multiplied by their index of refraction not equaling zero. If the sum is positive, which is typical for an imaging lens, the image plane will have a concave curvature to it; this is why movie theaters tend to have slightly curved screens. Since curving the image plane is seldom an option for a machine vision lens, the designers must insert negative powered corrective elements to reduce the sum of the focal lengths. This makes lenses longer and typically forces a negative lens to be close to the image plane, reducing the back focal length of the lens.

Chromatic aberration implies different wavelengths of light focus at different points. Because the dispersion of a glass determines the refractive power of the glass at different wavelengths, chromatic aberration can be removed by designing an imaging lens that contains both positive and negative lenses that are made using glasses with different dispersions. A downside to such a design is that it increases the number of elements needed for a lens.

To reduce the aberration, lower index lenses (which have higher abbe numbers) typically need to be used. As mentioned before, higher index lenses are required to correct for spherical and astigmatic aberrations; if a lens needs to correct for spherical, astigmatic, and chromatic aberrations, additional lens elements will be required. Additionally, the most desirable glasses for color correction often have properties that make them more expensive and difficult to manufacture. When possible, minimizing chromatic aberrations by using monochromatic light can have considerable savings in cost and complexity.

A type of chromatic aberration, chromatic focal shift describes how different wavelengths focus along different longitudinal positions. The goal of most imaging lens designs is to get all the desired wavelengths to focus on the same plane (the location where the sensor is located in the system). It is physically impossible to get a singular focus plane over a wide spectral range. However, it is possible to come very close. The closer to the same plane all the wavelengths are focused, the less issues that will be observed in the image.

Figure 3a shows a chromatic focal shift curve. Since this is an example of an achromatic lens design, two wavelengths can be focused into the same plane at the same time. The vertical axis shows changing wavelength from short to long, which is blue to red in the visible spectrum. The vertical black line represents a plane, which could be the sensor location. The blue curved line represents the relative location of best focus as a function of wavelength. The curve verifies that this is an achromatic design, since even if moved slightly to the left or right, the black line intersects the blue curve at only two points/wavelengths.

The blue, green, and red dots represent wavelengths associated with common 470nm, 520nm, and 630nm (blue, green, and red) LEDs. Notice that the green dot focuses to the left of the sensor plane, while the red and blue dots focus more to the right; this is the most balanced position of focus of the lens system if all the wavelengths or white light (which encompasses all wavelengths) are used. This design displays non-ideal image quality, as none of the wavelengths are truly in focus. If only one wavelength is used, the performance will improve since the balance for the others are eliminated. While this example demonstrates that red and blue can be balanced, this is not always true. Most lens designs are achromatic, but for very small pixels, this can become problematic.

Shown at the same scale as Figure 3a, Figure 3b displays an apochromatic lens. An apochromatic lens has three wavelengths that can be focused in the same plane at the same time. While this is a far more complicated design, it does allow for superior balancing across the wavelength spectrum. As shown, all three LED colors can be brought into focus on the same sensor plane simultaneously, which allows for superior image quality. Generally, apochromatic lens designs have high performance, but low versatility; they work very well over a smaller range of magnifications and working distances. Additionally, these are often high cost designs due to the additional required elements being made of expensive materials. Many high end, high magnification objectives are apochromatic. 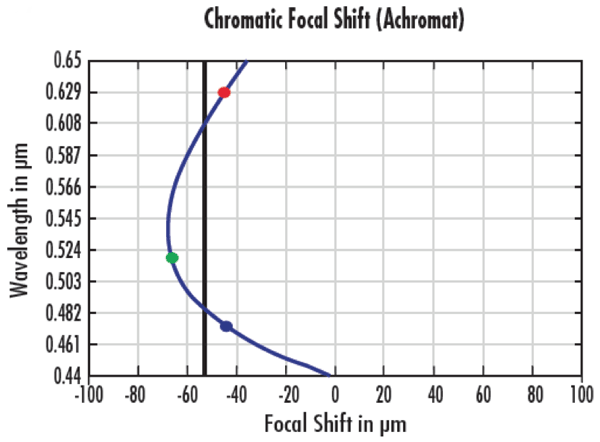 Figure 7a: Chromatic Focal Shift Curve for an Achromatic Lens 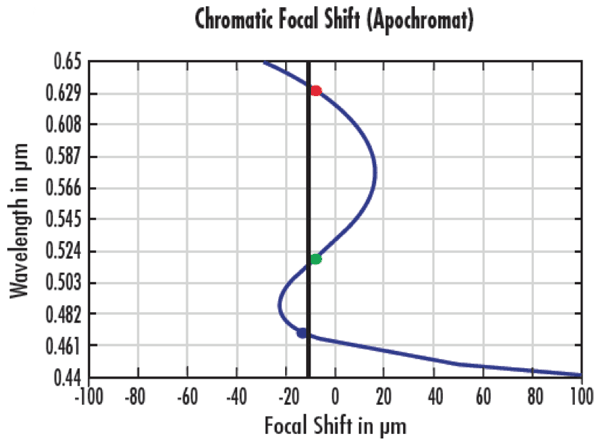 Figure 7b: Chromatic Focal Shift Curve for an Apochromatic Lens

“How will this lens perform?” It may sound like a simple question, but the answer can be complicated. For a machine vision lens, certain factors first need to be considered, such as the lighting used, the working distance to the object, the f/# of the lens, and the sensor size. Then the question needs to be clarified: how will the lens perform as-built as compared to nominal.

What do nominal and as-built mean? The nominal specifications assume that the lens is built exactly as it is designed. By modeling the lens in a ray tracing software, such as Zemax, Code V, or one of the numerous other options, one can predict the lens performance in any scenario and easily extract data. This is not always the best answer, though, as it assumes all factors are exactly as specified in the model, which is not likely the case.

As-built, on the other hand, is a statistical prediction of how a lens will perform using realistic manufacturing tolerances. As-built performance is difficult to predict; many factors must be modeled that may alter the performance of the lens, such as the absolute position and shape of the elements and the index and dispersion of the glass used. A typical tolerance file, the code used to tell the model all of the possible factors, has on the order of 100 - 200 components for a Zemax simulation and 200 - 400 components for a Code V simulation; this can vary significantly depending on the number of elements and the ways the elements are mounted.

A simplified description for modeling as-built performance is that every parameter is randomly varied, based on the tolerance ranges, and then statistically evaluated to determine how many random assemblies perform adequately. A few particular parameters are evaluated, such as MTF at specific frequencies and field points; from this, a probability of the lens reaching the performance requirements can be determined.

By looking at the prescription information of a lens, its nominal performance can be easily predicted for any configuration and with any criteria, such as MTF, distortion, or spot size. While this does not provide as accurate of a prediction as toleranced, as-built performance, it can provide a close approximation for the specific circumstance and a useful comparative tool.

Edmund Optics is a leading supplier of optics, imaging, and photonics technology for the Life Sciences, Biomedical, Semiconductor, R&D, and Defense markets around the globe. EO designs and manufactures a wide array of multi-element lenses, lens coatings, imaging systems, and optomechanical equipment, while supporting OEM applications with volume production of both stock and custom products. EO’s state-of-the-art manufacturing capabilities, combined with its global distribution network, has earned it the position of the world’s largest supplier of off-the-shelf optical components. Customers can purchase items by calling 1-800-363-1992, via the catalog or the website at www.edmundoptics.com.