New robotic assistants called "Astrobees," developed by NASA to assist in the operation of the International Space Station (ISS), are equipped with a sizeable payload of cameras and sensors to allow the robotics to understand their environment and move about in space. 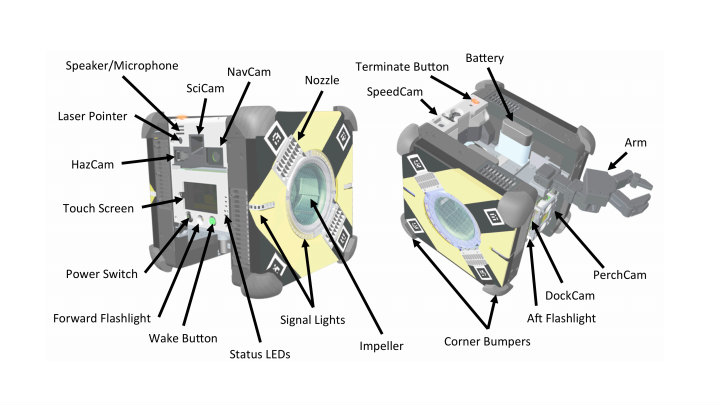 New robotic assistants called "Astrobees," developed by NASA to assist in the operation of the International Space Station (ISS), are equipped with a sizeable payload of cameras and sensors to allow the robotics to navigate the station.

The three Astrobees deployed to the ISS, named Honey, Queen, and Bumble, are cube-shaped robots that measure 32 cm wide. The robots can function autonomously or via remote control. They were developed at NASA's Ames Research Center in Moffett Field, California, to help astronauts with maintenance, inventory tracking, conducting experiments, and studying how humans and robots will interact in space.

The Astrobees are propelled by a pair of battery-operated fans that allow movement in any direction in zero gravity, and equipped with a robotic arm for gripping objects and handrails. When an Astrobee's battery is low it will automatically fly to its power station and dock to recharge.

The Astrobee uses six commercial, off-the-shelf external sensors for navigation. A fixed-focus color camera with wide FoV, called the NavCam, streams footage to the robot's control station at 1 Hz. An auto-focus color camera called the SciCam, that downlinks live HD video, and a LiDAR anti-collision system called HazCam are also located on the forward face of the Astrobee. 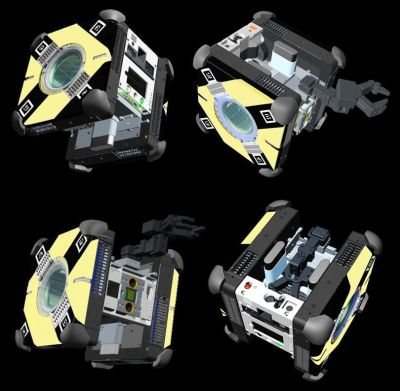 On the aft (rear) side of the Astrobee is the DockCam, a color camera almost identical to the NavCam, that provides guidance for the Astrobee during docking maneuvers with its recharge station. The DockCam reads fiducial markers, or objects used as points of reference, to help guide the Astrobee into its dock. The Astrobee can connect to its dock with a hard-wired Ethernet connection to download logs of the robot's activity, as backup for operational data streamed to control stations on Earth while the Astrobee is on duty.

The PerchCam, which is identical to the NavCam, is also located aft and turns on to detect handrails on the ISS. The Astrobee perches on handrails to reduce power consumption and get out of astronauts' way during operations. Finally, the Astrobee has a top-facing sensor package called SpeedCam that uses infrared imaging, an inertial measurement unit, and traditional optics to estimate velocity and control speed in order to avoid collisions.

The Astrobee uses its vision system to navigate the US Orbital Segment (USOS), the components of the ISS built and operated by the United States, by comparing images of the ISS interior with an onboard map of the station. Because the robot's cameras are always on, the ISS crew is made aware of when the Astrobee is streaming audio or video via LEDs on the fore and aft that indicate whether the robot is streaming video and audio, or only audio.

NASA will make the Astrobees available to guest scientists to conduct experiments.

(All images courtesy of NASA.)