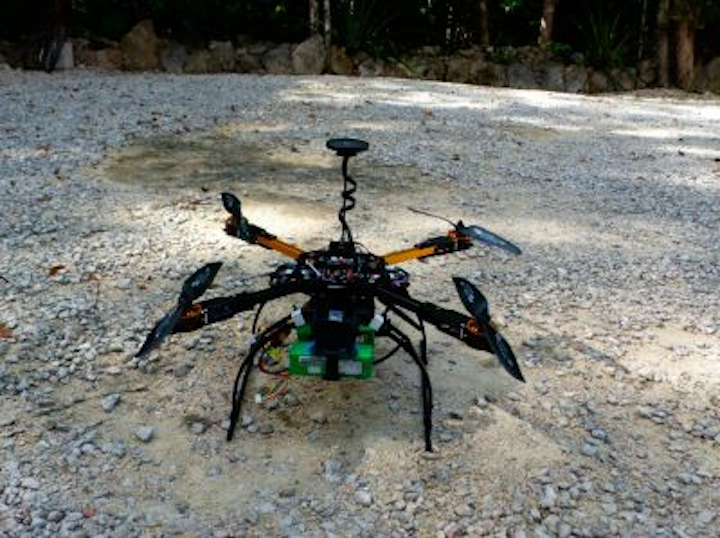 Spider monkeys are categorized as Endangered or Critically Endangered on the IUCN Red List of Threatened Species. They live in the forest canopy, tend to split into subgroups with shifting size and distance among members, and can move among the trees very quickly. These challenges make spider monkeys difficult to count via ground observation. Successful conservation efforts depend on frequent, accurate population counts. 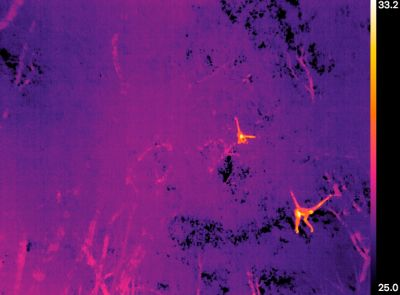 The Tau2 camera was used as a hand-held device for preliminary surveys to determine how the monkeys would appear in the drone footage and to gauge their surface temperature, which was determined to be 30° C. The researchers also generated a typical, 24-hour temperature range for the forest based on several years' worth of satellite observations. They determined that drone flights had to be conducted between around sunset and before sunrise in order to provide the needed thermal contrast between monkey and environment.

Twenty-nine grid pattern searches were conducted over the monkeys' three most-used sleeping sites. Four flights were also conducted in which the drone hovered for a minimum of five minutes over one of the monkeys' sleeping trees. TIR footage was analyzed by an expert in observing warm-blooded animals via infrared imaging. Five experienced observers equipped with binoculars and GPS units conducted ground counts.

The study found that for subgroups of fewer than 10 spider monkeys, ground and drone counts were generally in agreement. Where counts of subgroups of more than 10 spider monkeys were concerned, however, drone counts were higher than ground counts in 92% of cases. In addition, 75% of cases in which ground observers missed monkeys in large subgroups occurred at one of the sleeping sites where view from the ground is more obscured by vegetation compared to the other sites, an issue that did not affect the drones and TIR cameras. The mean increase of number of monkeys detected by drone flights versus ground observation was 49%.

The researchers pointed out challenges for future studies. Heterogenous vegetation and climate can affect population counts and would have to be controlled for. TIR imaging could mistake mothers and huddling children as a single heat signature, whereas a ground observer could make the distinction. Finally, large-area drone surveys of remote areas could be made difficult by regulations against beyond visual line of sight (BVLOS) flights and night drone flights.