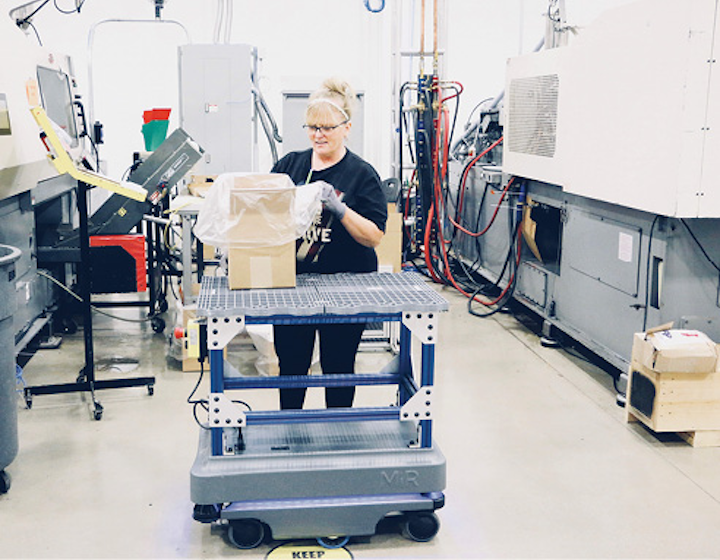 The MiR200 robot loops around Metro Plastic’s factory floor every 10 minutes, allowing operators to load finished products as soon as they fill a box. This has eliminated clutter and traffic on the floor, reduced the risk of injuries associated with forklift driving, and improved the efficiency of the company’s quality inspections and overall operations.

Since 1974, Metro Plastics (Noblesville, IN, USA; www.metroplastics.com) has produced custom plastic injection-molded parts and inject mold tooling. Facing competition both domestic and abroad and tasked with rising raw material costs and challenges in finding and keeping skilled labor, the company sought to automate certain processes to make improvements in safety, quality, and competitiveness.

As many as 20 jobs run at a time on the factory floor, and boxes of finished products stacked up at each press until a quality inspector could make her or his way around the floor to inspect the parts and have them delivered to the warehouse. Boxes and pallets became tripping hazards for workers during busy periods, and forklift traffic added to safety risks. Additionally, press operators and quality inspectors were tasked with the manual process of examining and moving boxes at floor level.

Metro Plastics in the 1990s considered autonomous-guided vehicles. This never came to fruition because of associated costs and the work required to use them. Recently, however, the company was introduced to autonomous mobile robots through Neff Group Distributors (Indianapolis, IN, USA; www.neffautomation.com) a distributor for Mobile Industrial Robots (MiR; Odense, Denmark; www.mobile-industrial-robots.com), a developer of collaborative, autonomous mobile robots.

A MiR200 robot was deployed on the factory floor where it loops around every 10 minutes, stopping at each press for 30 seconds, allowing operators to load finished products as soon as they fill a box. The robot then continues to the quality department in the warehouse, where it automatically docks at its charging station until its next round on the floor. MiR’s robot runs Monday through Friday for four six-hour shifts each day, for up to 10 hours or 15 km at a time. It can move at speeds of up to 1.1 m/s (4 km/h) forwards and 0.3 m/s (1 km/h) backwards.

Able to carry up to 440 lbs. (200 kg.), the 890 (L) x 580 (W) x 352 mm (H) robot uses S300 safety laser scanners from SICK (Waldkirch, Germany; www.sick.com) for 360° visual protection around the robot, as well as a RealSense 3D camera from Intel (Santa Clara, CA, USA; www.intel.com), for the detection of objects ahead of the robot at 50 to 500 mm above the floor. Four ultrasonic scanners detect transparent objects ahead of the robot, such as glass doors. Using all of these sensors in tandem, the robot senses and automatically maneuvers around obstacles and workers.

Project Coordinator Emma Morris says a map was created by driving the MiR200 robot around the production floor and that the entire process of mapping and programming the robot’s first missions only took a couple of hours.

In addition to the robot making scheduled stops—using the robot’s built-in Wi-Fi interface—operators use tablets installed at each press to call the autonomous robot to pick up finished products and take them to the quality department. Monitors on the production floor show the operators the robot’s location and its next scheduled stops.

After deploying the MiR200 robot, clutter and traffic on the floor was nearly eliminated, as was the risk of forklifts driving around the area, according to President Ken Hahn, who also anticipates savings in propane, maintenance, and labor costs for forklift drivers.

Metro Plastics in the future plans to reduce the need for operator interaction, as powered conveyor belts at each press will let product roll directly onto the robot, even if an operator isn’t available.