In this week’s/today's roundup from the Association for Unmanned Vehicle Systems International (AUVSI) which highlights some of the latest news and headlines in unmanned vehicles and robotics, the Wildflower International technology firm pairs with Silent Falcon UAS in Wildflower's bid to build a new data service, PAE ISR upgrades the Resolute Eagle UAS with new communication capability, and Ford Motor Company and Michigan State University continue their collaboration on autonomous technology and mobility research.

In today's roundup from the Association for Unmanned Vehicle Systems International (AUVSI) which highlights some of the latest news and headlines in unmanned vehicles and robotics, the Wildflower International technology firm pairs with Silent Falcon UAS in Wildflower's bid to build a new data service, PAE ISR upgrades the Resolute Eagle UAS with new communication capability, and Ford Motor Company and Michigan State University continue their collaboration on autonomous technology and mobility research.

A Santa Fe-based information technology firm called Wildflower International will use the UAS to help the pueblo with a variety of tasks, including managing the roaming herd of wild bison, mapping cultural sites on Pojoaque land, and improving fire control and search-and-rescue efforts.

Using UAS will be a brand-new experience for Wildflower, but the firm’s President and CEO Kimberly deCastro is looking forward to the benefits the technology can provide.

“UAS operations are opening a lot more doors for us,” says deCastro, who founded Wildflower International in 1991. “It’s an emerging market that we’re investing heavily in.”

Since its launch 27 years ago, Wildflower has primarily relied on federal contracts for IT products and services to grow its business. According to the Albuquerque Journal, profit margins are constantly declining as a result of the rise of the cloud and plummeting costs for IT systems and services, which has ultimately led Wildflower to turn to UAS to build a new data-service in the sky.

“The IT market is incredibly saturated and competitive,” deCastro says. “We need to look down the road at new technologies to grow.”

With this in mind, Wildflower partnered with Silent Falcon UAS Technologies in 2018. Silent Falcon equips its solar-powered UAS with infrared cameras and other sensors for real-time surveillance and imaging. While the company sells its platforms to public and private entities across the world, it is now moving into service-based contracts to operate its platform for customers.

Silent Falcon is interested in breaking into federal contracting, which Wildflower is good at, notes Silent Falcon CEO John Brown.

“They know the ins and outs of federal contracts, which is something we’re light on, so we teamed up with them,” Brown says.

Wildflower has secured its first UAS contract to provide services with Silent Falcon UAS to Homeland Security starting in April. In order to do that, though, Wildflower’s new six-member flight team needs to undergo training in real-world terrain, which it will do through the Pojoaque partnership.

“We need to be accurate and safe and deliver the right data set to our customers,” deCastro says. “We need experience so when we fly for agencies it looks like the Air Force just showed up.”

Wildflower says that along with flying its two UAS at Pojoaque—where it will provide monitoring services—it will also train pueblo members for careers with UAS. 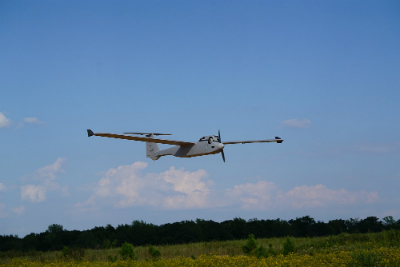 Capable of running live voice-over-internet-protocols, video, and other high demand applications, the system augments the capacity of a wireless network using existing infrastructure.

Additionally, users can incorporate a variety of meshed devices into the network—thanks to the radio's algorithm—in which the devices themselves form the communication infrastructure.

“This smart platform frees up valuable space and weight and in doing so, increases the endurance and payload carrying capability of the Resolute Eagle. PAE ISR, as well as other agencies, understand and want the increased performance of the MPU5 radio on their ISR platforms to maximize mission success.”

A single, reconfigurable aircraft that comes in two configurations—standard and vertical take-off and landing (VTOL)—the Resolute Eagle UAS has a flight time ranging from 12 to 18 hours-plus, depending on configuration.

Capable of operating independent of a runway, the UAS offers the VTOL configuration for deployment and recovery in challenging conditions, such as maritime and special operations.

Other unique features of the aircraft include its large payload capacity of more than 75 pounds, as well as low acoustic signature at mission altitudes, small logistical footprint, and significant power onboard for multi-intelligence payload integration.

“The aircraft's small operational footprint and extremely large payload capacity enables it to carry the most advanced sensor systems available and can be operated just about anywhere. The MPU5 then enables that critical information to quickly be disseminated to mobile teams on the ground and positively impact their mission.”

Rubens adds, “keeping our soldiers safe while simultaneously making them more effective is the overall goal.”

Ford Motor Company and Michigan State University (MSU) recently announced the renewal and expansion of their collaborative research alliance, which will facilitate continued collaboration between the two entities in a variety of fields, including autonomous technology and mobility.

Ford and MSU say that by strengthening their research and development partnership, they will be able to develop a broad range of innovations, with a focus on the aforementioned autonomous technology and mobility, as well as sensors and lightweight materials.

Over the course of their four-year partnership thus far, Ford and MSU have worked together on several successful projects, including collaborations in advanced engines, composite materials and information technology.

According to Ford, academic and industrial research and development partnerships “have a proven internal process to evolve, refine and implement successful collaborative results.”

“No company – no matter how large or vertically integrated – has the internal resources to lead in all important technical areas,” says Ed Krause, Ford global manager, external alliances.

“Partnering with leading research universities like Michigan State is an important part of Ford’s strategy to access world-class external talent.”

Ford has invested funds for research on more than 50 projects at MSU since 2014. Research areas include powertrain, materials and electrification.

With a greater range of collaboration and research proposals on the horizon, Ford says that the expanded project portfolio will not only involve its own researchers, but existing and new Michigan State faculty and students as well.

“This is a leading example of collaboration between industry and academia that demonstrates how MSU partnerships can both advance research and help develop innovative global solutions,” says Charles Hasemann, Michigan State University assistant vice president for innovation and economic development, MSU Innovation Center.

“Research collaborations like this one with Ford allow companies and MSU to share resources and expertise to solve real-world problems. The novel outcomes from these collaborations advance knowledge and understanding, while also achieving a positive economic outcome for the company and for Michigan.”