In this week’s roundup from the Association for Unmanned Vehicle Systems International (AUVSI), which highlights some of the latest news and headlines in unmanned vehicles and robotics, learn about a landmark unmanned aerial system (UAS) package delivery in Virginia, USA. Also, learn about Airbus Aerial’s efforts to assist in fighting California’s Carr fire, and beyond line of sight flights in North Dakota, USA.

In this week’s roundup from the Association for Unmanned Vehicle Systems International(AUVSI), which highlights some of the latest news and headlines in unmanned vehicles and robotics,learn about a landmark unmanned aerial system (UAS) package delivery in Virginia, USA. Also, learn about Airbus Aerial’s efforts to assist in fighting California’s Carr fire, and beyond line of sight flights in North Dakota, USA. 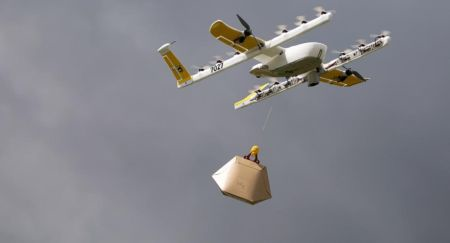 After a woman hit order on a mobile app, Wing’s UAS traveled 1.4 miles and delivered a package of ice cream and other frozen treats to a Montgomery County residence in less than 10 minutes.

A two-year-old child retrieved the cardboard box, completing the "most advanced drone package delivery to ever occur in the United States," according to those who conducted the operation.

"They can share the fact that the U.S. does have package delivery in its future."

Wing was previously unable to fly its UAS long distances, over people and beyond the pilot’s line of sight, but that has since changed after Virginia was selected as one of 10 locations to participate in the UAS Integration Pilot Program (IPP) back in May.

Virginia’s application for the UAS IPP proposed three areas for package delivery through a partnership with Wing: Wise County, Montgomery and Roanoke counties and Loudoun County.

Organizers say that the list is subject to change, but Wing nonetheless plans on launching the country’s first UAS delivery service that would reach real customers in residential neighborhoods as part of the program.

Wing’s CEO James Burgess says that the company is gauging interest from localities before it decides when and where the service will be available, as the company only wants to go where it is wanted. Burgess adds that the plan is for the full launch to happen "in the near term."

For now, though, Wing and Virginia Tech’s Mid-Atlantic Aviation Partnership (MAAP) have set up a "nest" at Virginia Tech’s Kentland Farm, which is located along the New River about seven miles from downtown Blacksburg. The nest is a bit of a parking lot for UAS.

Wing says that it is only conducting demonstrations of the technology there for now, and has not yet launched a commercial package delivery service.

Wing’s UAS package delivery process starts when a customer uses a mobile app to select items, checkout and pay. The vendor, which could be anything from a local restaurant to a convenience store, is then alerted, and employees from that vendor load the box and scan a barcode when it’s ready for delivery.

"When the merchant scans the package, that’s what initiates the aviation side," Burgess says.

Once the aviation side is initiated, Wing’s automated system begins checking the airspace for other aircraft and no-fly zones. While the system finds the landing zone and plans a route, the UAS wait on charging pads outside.

The computer chooses which UAS is ready for the flight, and that UAS takes off and flies autonomously while a human pilot stands by in the event intervention is needed.

The UAS flies from the nest to the merchant, and a worker there hooks the package onto a string dangling from the UAS. The package is drawn up and the UAS continues on to the final destination. 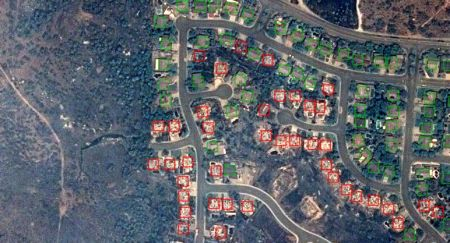 Airbus Aerial, the startup offshoot of commercial and defense giant Airbus, has been using its analytic tools to help insurance companies and first responders come to grips with California’s raging Carr fire, still only 61 percent contained as of Monday.

Airbus Aerial fuses satellite data with its in-house analytical systems to let insurance companies monitor areas they insure, enabling them to settle claims rapidly — in some cases, before the homeowner even knows their house has burned down.

One insurer logged into AA’s system on Friday and by Saturday had settled about a thousand claims, says AA President Jesse Kallman.

"With the satellite, it’s pretty interesting to be able to triage an entire county," Kallman says.

The company also flies drones on some occasions and can integrate that closer-in data with its satellite imagery, but it’s not doing so over the Carr fire as the satellite data is meeting the needs of the insurance companies and first responders.

The company, just over a year old, has existing contracts with insurance companies to provide data and analytics, and quickly used its satellite data to start providing it using tools such as its Triage Toolkit, its proprietary damage classification system.

Insurance companies can log in through the company’s portal, enter their area of interest and get daily updates, including which houses have been destroyed.

"The insurers are actually contacting their customers before the customers know there is a problem," Kallman says.

Firefighters can get data about what areas have already been burned out and what locations might be next, also updated daily.

Kallman says Airbus Aerial has worked on more than 100 fires in its short life but says its tools have improved over that time. In its early days (the company was announced at AUVSI’s Xponential show in Dallas) AA worked with third-party analytical tools, but now it has a full suite developed in-house, including a claims dashboard that uses machine learning to tell insurance companies which properties are a total loss, so they don’t have to endanger agents by sending them to check.

The Northern Plains UAS Test Site in Grand Forks, North Dakota has received permission from the FAA to fly UAS beyond the operator's line of sight, up to 30 miles around the Grand Sky commercial testing site.

Grand Sky will now be able to fly larger UAS aircrafts at higher altitudes thanks to the new authorization, according to Northern Plains site director Nicholas Flom.

The authorization, along with the site's first flight of this kind, will be commemorated on Monday, August 20. A number of dignitaries will be in attendance for this event, including North Dakota Senators John Hoeven and Heidi Heitkamp.

"This authorization continues to build North Dakota's competitive edge when it comes to UAS development, testing and research," Hoeven says via the Grand Forks Herald.

"In 2016, the Northern Plains Test Site became the first place in the nation with authorization to fly large UAS beyond line of sight by relying on a ground-based system to ensure flight safety. The test site has now demonstrated that this system is safe enough to eliminate the need for a manned plane to observe the UAS flight."

Heitkamp adds, "Grand Sky is on the cutting edge of UAS development, and this authorization will allow our world-class aviation pioneers to continue to advance the technology that has a big future for both commercial and national security purposes."