In this week’s roundup from the Association for Unmanned Vehicle Systems International (AUVSI), which highlights some of the latest news and headlines in unmanned vehicles and robotics, learn about two test robots that began mapping the city of Arlington’s streets and sidewalks for purposes of being able to make deliveries. Additionally, learn about new reports that highlight the future of automated vehicles as well as an autonomous shuttle pilot project on public roads in Canada.

In this week’s roundup from the Association for Unmanned Vehicle Systems International(AUVSI), which highlights some of the latest news and headlines in unmanned vehicles and robotics,learn about two test robots that began mapping the city of Arlington’s streets and sidewalks for purposes of being able to make deliveries. Additionally, learn about new reports that highlight the future of automated vehicles as well as an autonomous shuttle pilot project on public roads in Canada.

The first two test robots from Marble, a San Francisco-based robotics company, began mapping out the city streets and sidewalks of Arlington, Texas on Friday, August 17, according to NBC DFW.

Marble is the first company to deploy this type of technology in Arlington after the City Council gave approval for private companies to deploy robotic delivery devices to test their usage in the city back in June.

"This is our first step in interacting with the city of Arlington and we are very excited to be here," says Marble representative Jackie Erickson.

Over the course of the next few weeks, the two robots will travel across the city to get a layout of the land. The robots will be accompanied by human "ambassadors" during this process.

Once the mapping process is complete, a pilot delivery program is expected to start. A human will accompany the robots during the first few months of the program to monitor their behavior, but the plan is for the robots to eventually operate with full autonomy, with a human watching movement from a remote computer.

"It would look like, grocery delivery, package delivery throughout the day – working with our retailers," Erickson says. "You’ll be seeing these robots on the sidewalks navigating alongside pedestrians."

Capable of holding up to four bags of groceries, six shoe boxes and 10 hot meals, the robots will deliver to locations up to about two miles away. Customers will retrieve their items by entering a special code into the robot.

No specific routes have been chosen yet for the robots to operate on, but data gathered during the mapping process will help decide where the robots go.

"We’ve got a lot of great residents, apartments and neighborhood in North Arlington and that is probably where they will be focused on," says Arlington Strategic Planning Manager Lyndsay Mitchell.

Mitchell believes that this technology could prove to be extremely beneficial for citizens.

"Particularly for people who have transportation challenges or mobility challenges," Mitchell says. "They will be able to get groceries and other items delivered to them so they won’t have to make those short trips that may be inconvenient for them at any time." 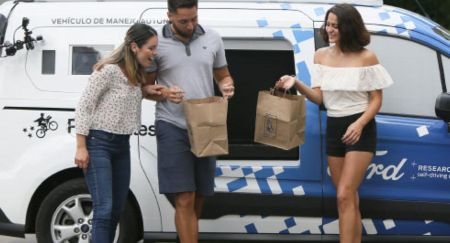 Two recent reports highlight the way that industry and government are seeing the automated vehicle market shaping up.

Among other findings, it concludes that states should encourage automated vehicle testing "while retaining enough control and oversight to protect the public." States should establish conditions for AV testing, determine if laws need to be changed to allow it, coordinate testing with law enforcement, inform the public and media about testing and "maintain effective high-level oversight of all testing."

As of June, the report notes that 37 states and the District of Columbia have enacted legislation or issued executive orders relating to automated vehicles. Thirteen states authorize a study, define key terms or authorize funding; eight states authorize testing; 11 states and D.C. authorize full deployment; five states regulate truck platooning, where one truck can control others; and a dozen states allow testing or deployment without a human operator in the vehicle.

Automaker Ford also recently issued a report on its approach to developing self-driving vehicles, entitled, "A Matter of Trust."

In it, Ford says it doesn’t necessarily want to be first to market, but will focus on safety.

"We don’t believe that the central challenge in the development of self-driving vehicles is the technology. It’s trust. Trust in the safety, reliability and experience that the technology will enable," the report says.

The Department of Transportation has called for voluntary reporting from automakers on their work developing and testing AVs, and Ford says this is its first attempt at that.

Ford plans to have a fleet of self-driving vehicles in several cities over the next few years, with the goal of manufacturing a purpose-built self-driving vehicle in 2021 that can provide ride-hailing and delivery services. They won’t be sold to consumers, at least at first.

"You’ll be able to experience these vehicles through multiple means, including commercial fleets in mobility services such as ride-hailing and goods delivery. We believe we can offer the best value to our customers by providing the technology through a fleet service, similar to the way Ford currently offers specially engineered vehicles for taxi and police fleets," the report says.

Ford’s car won’t have a steering wheel, gas or brake pedals, and its "brains" and senses, what Ford calls the Virtual Driver System, will come from Ford’s partner, Argo AI, an artificial intelligence and robotics company founded by former Google and Uber leaders. Ford announced last year that it is investing $1 billion in Argo AI over the next five years.

Ford’s AVs will also feature redundant brake and steering systems should the primary systems fail and will have upgraded brakes, wheels and body structures that can withstand more work cycles, similar to the fleet vehicles Ford builds for police and service fleets.

The automaker is also working on the "language" that a driverless car can use to communicate with pedestrians. Ford developed a light bar that fits near the windshield, which could signal the vehicle’s intent; a white light passing back and forth indicates the car is yielding to pedestrians, and a rapidly blinking light means it’s planning to proceed.

Ford tested its system in a car that looked like it was driverless but really wasn’t — the driver was wearing a "seat suit" that camouflaged him.

"Our light signals still need to undergo a significant amount of research, but we believe development and adoption of a global standard is critical to support eventual deployment of self-driving vehicles," the report says.

Navya and Keolis Canada recently announced the launch of a 12-month autonomous shuttle pilot project, which is set to begin at the end of this month in Candiac, Quebec, Canada.

During the year-long pilot, Navya’s AUTONOM shuttle will operate in real traffic conditions on public roads, which will be a first in Canada. In an effort to determine how to best meet user's mobility needs, especially during their home-work trips, the shuttle will carry users on a two-kilometer route, with several stops throughout the city.

"NAVYA is proud to work with our partner Keolis Canada and the City of Candiac on this important milestone in Canadian transportation," says Christophe Sapet, Navya’s CEO.

"This project embodies NAVYA’s vision of autonomous shared mobility and fills an important transportation need for which our shuttles were designed."

Patrick Gilloux, President and Chief Operating Officer of Keolis Canada, comments, "we are very excited to launch this project in Québec. Keolis is investing in new shared electric mobility services because it is an important cornerstone for the future of public transportation."

The project is being supported by a variety of entities, including the Government of Quebec, Technopôle IVEO, Cluster for Electric and Smart Transport and Propulsion Québec.