In this week’s roundup from the Association for Unmanned Vehicle Systems International (AUVSI), which highlights some of the latest news and headlines in unmanned vehicles and robotics, learn about Project Hero—a custom Land Rover Discovery car with a deployed unmanned aerial system (UAS) in tow that will be deployed for search-and-rescue operations for the Red Cross in Austria.

In this week’s roundup from the Association for Unmanned Vehicle Systems International(AUVSI), which highlights some of the latest news and headlines in unmanned vehicles and robotics,learn about Project Hero—a custom Land Rover Discovery car with a deployed unmanned aerial system (UAS) in tow that will be deployed for search-and-rescue operations for the Red Cross in Austria.

Additionally, learn about nine new partners for the FAA’s Low Altitude Authorization and Notification Capability (LAANC) initiative, which is described as an "innovative collaboration between the FAA and the drone industry that provides near real-time processing of airspace authorizations for Part 107 drone operators nationwide who fly in controlled airspace," as well as the Royal Netherlands Navy’s new UAS software.

A year and a half since the Red Cross and Land Rover began collaborating on an emergency vehicle concept car that consists of a customized Land Rover Discovery kitted out with a deployable UAS for search-and-rescue operations, the concept, known as Project Hero, has entered active service with the Red Cross in Austria.

Described as an "emergency mobile command center," Project Hero starts with a 258 PS 3-liter TD6 Land Rover Discovery, which helps response teams get to where they need to be quickly. Once the vehicle arrives at its location, a UAS can be launched to search for people, while the back of the Land Rover folds out into a Command Center that includes a touchscreen computer and communications gear.

The Land Rover Discovery is equipped with high-intensity spot lights in the front bumper and roof rack, as well as 360-degree emergency blue lights. The crew stays connected thanks to four radio antennas, two mobile Wi-Fi hotspots and a satellite phone.

The vehicle is kitted out with an eight-rotor UAS that can be launched from the roof rack. The UAS is fitted with thermal imaging, and it can spot a vehicle from more than half a mile away, and a person from about 1,444 feet.

A live video feed is transmitted back to the vehicle, and to get precise coordinates for a location, users can tap on the touchscreen. If a user taps on a moving subject, the UAS will be directed to lock onto it.

Project Hero is expected to help Austrian Red Cross crews in a variety of emergency situations, including locating lost or injured people in the wilderness, and seeking survivors of disasters. 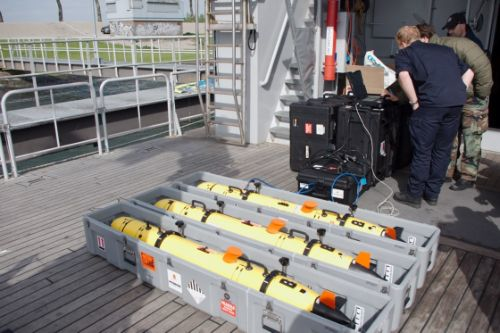 On Oct. 1, the FAA announced nine new partners to its Low Altitude Authorization and Notification Capability (LAANC) initiative, which is described as an "innovative collaboration between the FAA and the drone industry that provides near real-time processing of airspace authorizations for Part 107 drone operators nationwide who fly in controlled airspace."

After the success of the FAA’s prototype, the initiative was simultaneously opened to other air traffic control facilities, as well as to new industry partners. A five-month onboarding process began back in April, resulting in nine new LAANC partners. Those partners are: Aeronyde, Airbus, AiRXOS, Altitude Angel, Converge, DJI, KittyHawk, UASidekick and Unifly.

These nine new LAANC partners join AirMap, Harris Corp., Project Wing, Skyward and Thales Group; all of which have already met the technical and legal requirements to provide LAANC Services.

LAANC uses airspace data—including UAS facility maps—that shows the maximum altitude around airports where the FAA may authorize operations under Part 107 in controlled airspace. Through the program, UAS operators are given the ability to interact with industry developed applications, and receive near real-time authorization from the FAA.

Next year, the FAA will accept applications from parties interested in becoming LAANC service providers. Those applications will be accepted from January 7 to February 8 and from July 8 to August 9. The FAA says that this is not a standard government acquisition, as there is no Screening Information Request (SIR) or Request for Proposal (RFP) related to this effort.

Information on the application process can be found here.

Neptune is SeeByte’s goal based mission planning and autonomy engine software. The software allows for the expedition and optimization of single and multi-vehicle operations.

"We are privileged to be in a position to continue working with The Royal Netherlands Navy and assist in their goal to achieve security at and from the sea," says SeeByte’s Technical Client Manager, Alastair Cormack.

"With the US, UK and Canadian navies currently using Neptune software, it is fantastic that the RNLN will now have access to the advanced capabilities we offer."

Neptune can be used to coordinate fleets of unmanned assets for Mine Countermeasure (MCM) missions, which allows operators to easily coordinate a variety of assets to search, classify and map, re-acquire and identify operations as part of a single mission.

When all the mission plans and monitoring are combined in a single work station and user interface, teams can manage larger fleets of unmanned assets without putting extra strain on the operators.