In this week’s roundup from the Association for Unmanned Vehicle Systems International (AUVSI), which highlights some of the latest news and headlines in unmanned vehicles and robotics, learn about the integration and demonstration of Textron’s manned-unmanned teaming capability, a "Sky Dome" at Griffiss International Airport that will support the development of unmanned aerial system (UAS) technologies to operate safely and securely in the National Air Space, and a new robotics and integration facility.

In this week’s roundup from the Association for Unmanned Vehicle Systems International(AUVSI), which highlights some of the latest news and headlines in unmanned vehicles and robotics,learn about the integration and demonstration of Textron’s manned-unmanned teaming capability, a "Sky Dome" at Griffiss International Airport that will support the development of unmanned aerial system (UAS) technologies to operate safely and securely in the National Air Space, and a new robotics and integration facility. 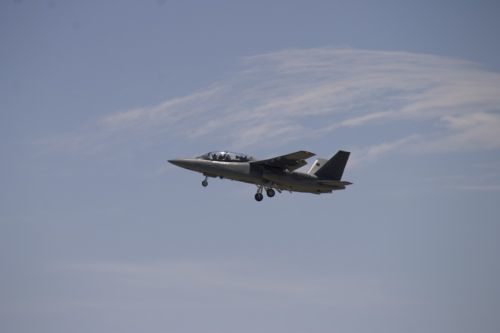 "Through Textron Systems’ extensive experience in the field and Textron Aviation Defense’s expertise, we realize the revolutionary benefits that manned-unmanned teaming can deliver to keep manned assets out of harm’s way," says Textron Systems Vice President of Programs Wayne Prender.

"Together, Synturian command and control technologies and the Scorpion jet take this capability to the next-level – increasing Textron Systems’ Level of Interoperability (LOI) from 3 to 4, while enabling multi-vehicle command and control from a moving airborne asset."

The team installed Synturian software into the cockpit mission computer of the Scorpion jet during the rapid proof of concept demonstration. The team simulated a NIGHTWARDEN Tactical UAS and an Aerosonde small UAS for the demonstration, which featured flight acquisition and control of the simulated air vehicles and sensors (up to LOI 4).

​The Scorpion aircrew used Synturian for several tasks, including setting up flight route waypoints, establishing surveillance orbits, steering the sensor and changing the unmanned aircraft heading, airspeed and altitude. The simulated UAS were then able to operate without further aircrew interaction.

"The ability to easily and intuitively control unmanned systems from the cockpit of a manned tactical aircraft is a game-changer," says Textron Aviation Defense Senior Flight Test Pilot Brett Pierson, after flying the Scorpion-Synturian test missions.

"The tactical and operational ramifications of this new capability are enormous. Further extending Scorpion’s sensor suite and penetrating a weather layer to generate target coordinates; or creating a triangulated solution independently; or adding layers to a multi-spectral fused solution, deliver an entirely new set of tactical capabilities that have never been possible in a fighter-typed aircraft."

Going forward, Textron Systems and Textron Aviation Defense plan to "advance integration efforts, testing and demonstration of this transformational capability with fully-operational unmanned aircraft" to interested customers across the world.

$500,000 of that funding will be used to transform a hangar at the airport into a year-round UAS experimentation environment known as a "Sky Dome," which will support the development of UAS technologies to operate safely and securely in the National Air Space (NAS).

This funding is in addition to $450,000 that was previously announced, Griffo says.

The remaining $300,000 will be used for a UAS mobile operations center for the airport. The center, which will be equipped with flight operation and radio equipment, will give the airport "more flexibility when it comes to operational abilities," according to Griffo.

"It is important that we continue to position ourselves to take advantage of any opportunities in emerging industries such as unmanned aerial systems," Griffo says via WKTV NewsChannel 2.

"This funding will help us to do that by providing essential resources that will help with the development of drone technology in our region and will enhance Griffiss International Airport. It is my hope that we continue to make significant investments into developing this technology and our airport so that we can remain competitive with other sites across the country."

On July 26, Virginia Governor Ralph Northam announced that Aurora Flight Sciences will invest more than $13.75 million to expand its operation in the City of Manassas, Virginia, where it is headquartered.

Aurora, which was acquired by The Boeing Company last year, plans on building a robotics and integration facility that includes a manufacturing unit, a research and development lab, a hangar, and office space. The project is expected to create 135 new jobs.

"Since choosing the Manassas Airport to locate our headquarters nearly 27 years ago, we have prided ourselves in bringing new technology to the region and becoming one of the largest employers in the City," says John Langford, Founder and CEO of Aurora Flight Sciences.

"Now as part of The Boeing Company, we are able to continue our expansion in developing next-generation autonomous systems that will transform transportation."

The Virginia Economic Development Partnership and the City of Manassas worked together to secure the project for the state of Virginia. A $500,000 grant from the Commonwealth’s Opportunity Fund was approved by former Governor Terry McAuliffe to help Manassas with the project.

Aurora will also be eligible to receive Sales and Use tax exemptions on manufacturing equipment, as well as a Major Business Facility Job Tax Credit. The Virginia Jobs Investment Program will provide the funding and services necessary to support Aurora’s employee training activities.

"In Virginia we’re proud of our leading position in the aerospace industry, and that is only strengthened by companies like Aurora Flight Sciences that continue to grow and thrive in our Commonwealth," Governor Northam says.

"Virginia is proud to partner with Aurora in this next phase of growth, and we thank them for choosing to expand in Manassas."