Researchers from the Australian Institute of Marine Science (AIMS) have deployed an underwater robot carrying a hyperspectral camera in trials that would enable greater monitoring of the Great Barrier Reef. 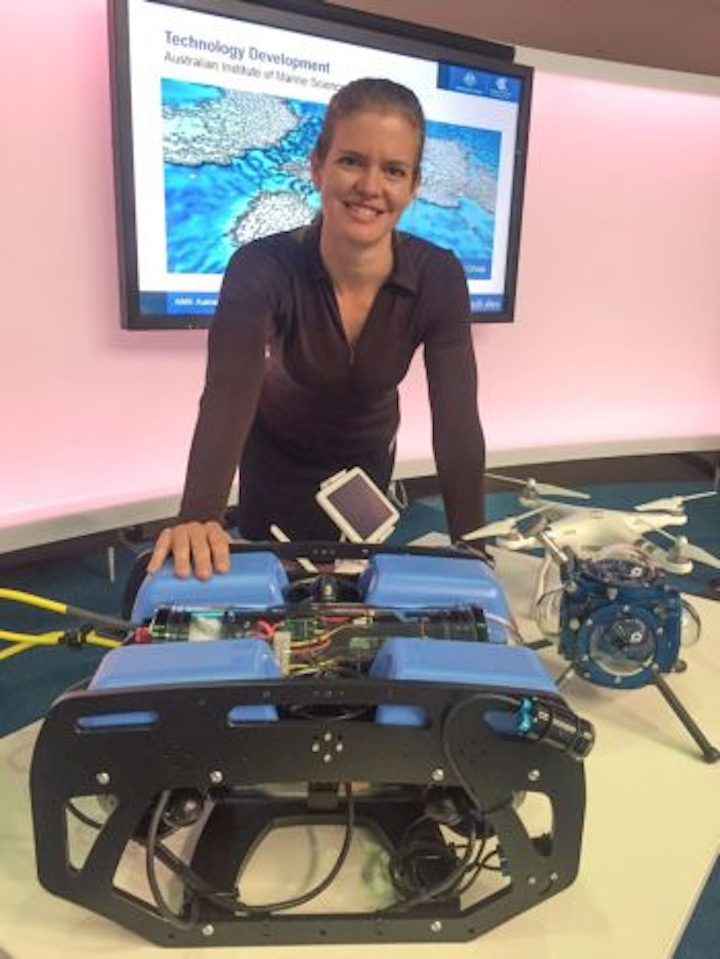 Researchers from the Australian Institute of Marine Science (AIMS) have deployed an underwater robotcarrying a hyperspectral camera in trials that would enable greater monitoring of the Great Barrier Reef.

The AIMS technology development and engineering team have spent two weeks at sea testing a remotely operated vehicle (ROV) called the Blue ROV2 which has semi-autonomous navigation capabilities. AIMS Technology Transformation leader Melanie Olsen (pictured) and her team put a hyperspectral camera onto the ROV, which features a dive capability of 100m.

Deployed onto the ROV was a Nano-Hyperspec hyperspectral camera from Headwall Photonics, which operates in the 400 to 1000 nm spectral range. The camera features a 640 x 480 CMOS image sensor with a 7.4 µm pixel size that achieves frame rates up to 350 fps. In addition, the Nano-Hyperspec also features onboard data processing and storage and has 640 spatial bands and 270 spectral bands, while featuring a GigE Vision interface, 17 mm lens, and a storage capacity of 480GB.

With the ability the capture more than 270 bands of color information, the hyperspectral camera enables the ROV to survey the reef in more detail, including mapping of the ocean floor, depth of the water, identifying bleached corals, and more, according to AIMs, which is working in partnership with the Queensland University of Technology to leverage Australian expertise in shallow water marine robotics.

"This is the first time a hyperspectral camera has been trialed underwater on our ROVs," Olsen said.

In addition to the Blue ROV2, the team also deployed the hyperspectral camera on a drone. This was the first time that the team deployed ROVs and drones simultaneously during night-time missions.

"We did some revolutionary stuff during this trial, we also flew the 900g hyperspectral camera under our large aerial drone off our research vessel (RV) Cape Ferguson, over a coral transect on John Brewer Reef, which is one of our long term monitoring sites," said Olsen.

Technologies such as robots and hyperspectral cameras, according to Olsen, help the team stay competitive and improve their research endeavors.

"We want to remain globally competitive and so we are boosting our technological capabilities. Robotics helps us to monitor larger and new sections of the reef in areas that would otherwise be dangerous to divers."

She added, "These robots will soon be helping to free up our marine science researchers to do the important work of looking at how to help support these reefs."

Additionally, the robots enable the monitoring of aspects of coral reefs the team has not been able to accomplish previously, while also keeping human divers out of harm’s way, in the form of crocodiles, marine stingers, or sharks.

Using these technologies during the two-week trial showed that the team was able to perform missions at night, while also allowing them to go deeper, according to Olsen.