In this week’s roundup from the Association for Unmanned Vehicle Systems International (AUVSI), which highlights some of the latest news and headlines in unmanned vehicles and robotics, learn about Lockheed Martin’s unmanned MQ-25 unmanned tanker, a concept for a truck-launched drone package delivery system, and a partnership to help UAS operators manage multiple UAS simultaneously.

In this week’s roundup from the Association for Unmanned Vehicle Systems International(AUVSI), which highlights some of the latest news and headlines in unmanned vehicles and robotics,learn about Lockheed Martin’s unmanned MQ-25 unmanned tanker, a concept for a truck-launched drone package delivery system, and a partnership to help UAS operators manage multiple UAS simultaneously. 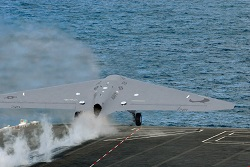 The "purpose-built" tanker’s configuration has a "clean sheet design," the company says. According to Rob Weiss, vice president and general manager for Lockheed Martin Skunk Works, the aircraft’s configuration is a result of the Skunk Works’ team listening to its customer.

"As the customer’s requirements have evolved, since the UCLASS [Unmanned Carrier Launched Airborne Surveillance and Strike] program was canceled, our team has done an exceptional job of listening to what the Navy has asked for, and ultimately driving to a solution that is right in line with what their requirements are," says Weiss, who is retiring at the end of the year.

Lockheed Martin is going up against Boeing and General Atomics Aeronautical Systems for the tanker work, with a contract expected as soon as this summer. Northrop Grumman, one of the original competitors for UCLASS, has since dropped out.

General Atomics says it has also proposed a clean-sheet design, and in February announced its corporate team for the work, which would include Boeing Autonomous Systems, engine maker Pratt & Whitney and communications systems provider L3 Technologies.

Boeing unveiled its entry for the contest in December, basing it on its original UCLASS design. Defense News recently reported that the company is so bullish on its efforts that it may be building a second prototype aircraft.

The program would receive $684 million under the fiscal 2019 Department of Defense budget request, a significant boost from the fiscal 2018 amount of $222 million.

With all of the work and engineering that was put into the UCLASS configuration over the years preceding its cancellation, the initial concept for the MQ-25 was to leverage all of that engineering and see what could be done to transform a strike-reconnaissance aircraft into a tanker aircraft.

Ultimately, though, the Skunk Works team was not satisfied with the results.

"It was a compromise, as, frankly, most derivatives end up being," Weiss says. Weiss explains that this was the case because the airplane was designed to do one thing, but now they were trying to "maneuver that to perform another mission."

Following this realization, the Skunk Works team considered "wing-body-tail configurations." Weiss says that the airplanes that they had at the time were capable of performing the mission, but they once again found that it was not as high performing an airplane as they would’ve liked.

As they continued their trade studies, the Skunk Works team went back to the flying wing design, but this time, they went into it with a completely clean sheet approach, as they no longer were trying to derive the UCLASS configuration to be a tanker.

This has led to the current version of the MQ-25, which is equipped with a number of capabilities; chief among them, its carrier suitability.

"The ability to be a carrier-suitable airplane is absolutely key to the U.S. Navy," Weiss says.

Being carrier suitable requires the aircraft to not only be able to take off from the carrier, but it also has to be able to land on the carrier as well.

For Weiss and Jeff Babione, who will succeed Weiss in the role of vice president and general manager once Weiss retires, one of the MQ-25’s most impressive characteristics surrounds its landing ability, as the aircraft’s eyes are always looking at the "yellow shirt" on the carrier that is guiding the aircraft in, which allows whoever is operating the MQ-25 to see what the aircraft is seeing as it lands on a carrier.

Weiss says the yellow shirts want pilots of manned aircraft looking at them so they don’t miss any of the precise signals they are being given, and the same idea applies to unmanned aircraft.

With this in mind, the MQ-25 is configured so its eyes are looking at the yellow shirt, and the aircraft has a series of light signals that let the taxi director know that the actual operator of the aircraft — located on the carrier — is seeing every signal the yellow shirt is giving them.

This capability, along with a host of others such as the MQ-25’s ability to seamlessly integrate with existing systems, and its exceptional ISR overwatch endurance, were all designed with the Navy’s needs in mind, according to Weiss.

"Everything that we have done on developing the MQ-25 configuration has been focused on providing a low risk solution for the Navy," Weiss says.

Video footage of the Lockheed MQ-25 concept can be seen here. 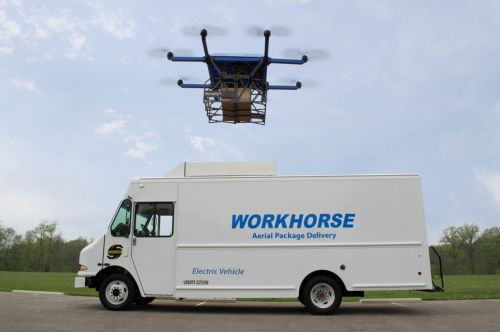 The HorseFly UAS Delivery System, which is a "custom-built, high efficiency" delivery UAS, is fully integrated with the Workhorse line of electric/hybrid delivery trucks, and it meets FAA guidelines for UAS operations in the United States.

"Last mile package delivery is changing, and the HorseFly delivery system is leading the way."

Being that it is fully integrated with Workhorse’s delivery trucks, the HorseFly system is designed to allow a driver or driver's assistant to maintain line-of-sight operation of the UAS delivery process.

"We feel that package delivery by drone is here," Burns says. "Soon your package may come to your home by HorseFly!" 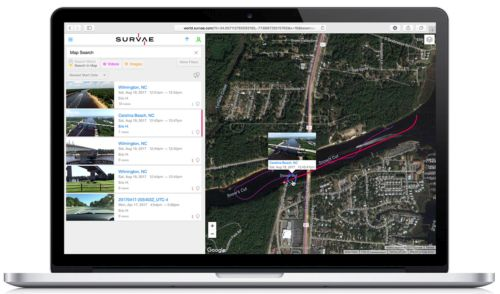 With this integration, a single operator will be able to seamlessly manage the real-time display and storage of multiple video streams from the multiple UAS being managed by the IRIS GCS.

In addition, videos will be meta-tagged and stored for "near real-time analysis or for post-mission archival search of missions flown."

"It is clear that future operations will require a single operator to be able to manage the data collection from multiple aircraft," says Eric Hesterman, CEO of Survae.

"The Kongsberg Geospatial IRIS GCS provides the ability to manage multiple aircraft and their sensors so Kongsberg is a very logical partner for us to provide an integrated solution for operators. Managing the data is the next challenge for the drone industry."

Once integrated with Survae, IRIS GCS will provide a "seamless experience" for the operator to manage the many sensors that may be in the air at the same time. Ultimately, this "expanded post-mission retrieval and analysis capability" will greatly reduce the workload for UAS operators.

"We’re very pleased to be working with a partner like Survae," says Ranald McGillis, President of Kongsberg Geospatial.

"Our clients are telling us that real-time video management and storage is a great problem for them, and Survae provides a best-in-class solution to this growing need. Integrating our capabilities creates a seamless workflow from data collection to post-mission retrieval."