In this week’s roundup from the Association for Unmanned Vehicle Systems International (AUVSI), which highlights some of the latest news and headlines in unmanned vehicles and robotics, learn about a new commercial delivery drone that can reach speeds of nearly 80 miles per hour (MPH), as well as a new drone camera from DJI that will feature a thermal imaging sensor from FLIR.

In this week’s roundup from the Association for Unmanned Vehicle Systems International(AUVSI), which highlights some of the latest news and headlines in unmanned vehicles and robotics,learn about a new commercial delivery drone that can reach speeds of nearly 80 miles per hour (MPH), as well as a new drone camera from DJI that will feature a thermal imaging sensor from FLIR.

Zipline, which operates a national UAS delivery system to ship blood and drugs to remote medical centers in Rwanda, has developed what it claims is the "world's swiftest commercial delivery drone," which has a top speed of just under 80 mph.

According to MIT Technology Review, Zipline is hoping its new fixed-wing UAS, which is both speedier and easier to maintain than its predecessor, will help it attract business in an industry that includes no shortage of major players, including the likes of Amazon—which has been testing its Prime Air drone delivery service for years in the United Kingdom—and Project Wing—part of Alphabet’s secretive X lab—which is using its UAS to deliver pharmaceuticals and burritos in a pilot project in Australia.

Since the start of its service in October 2016, Zipline has flown approximately 300,000 kilometers in over 4,000 flights.

According to Zipline’s CEO Keller Rinaudo, the company’s experience in Africa has inspired it to overhaul its UAS, as well as its entire logistics system. As a result, Zipline has revamped the distribution centers where the UAS are stored and loaded. Also, to assist with pre-flight checks, the company is using its computer-vision technology.

As a result of these and other changes, Zipline has cut the time between receiving an order and getting a UAS into the air from 10 minutes to just one minute.

With a streamlined launch-and-recovery system, along with more and faster UAS, Zipline will now be able to manage 500 flights a day out of a single center, which is a major increase from the 50 it was managing before. Zipline says that its fixed-wing UAS can serve a much greater area than typical quadcopter UAS, as Zipline’s UAS can carry a load of up to 1.75 kilograms on a round trip of up to 160 kilometers.

Timothy Reuter, the head of the Drones and Tomorrow’s Airspace initiative at the World Economic Forum, believes that Zipline can utilize its experience in Africa to help organizations in other places improve the efficiency of supply chains using its UAS technology.

While Zipline could face competition from other companies such as Amazon and X’s Project Wing, Rinaudo believes that speed will ultimately give Zipline an edge when it comes to delivering important medical supplies and other goods.

Having proved the value of its service in Africa, Zipline has signed partnerships with several health-care systems in the United States, and the company hopes to have projects up and running by the end of 2018. 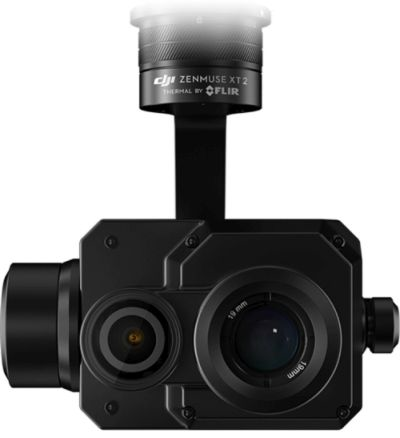 The DJI Zenmuse XT2 is built with industrial and public safety applications in mind, and according to FLIR and DJI, the camera expands upon the benefits offered by the DJI Zenmuse XT, which is the first thermal-equipped camera jointly developed by the companies.

"The arrival of the DJI Zenmuse XT2 with a FLIR sensor signifies an important technological advancement for drone operators who need both a visible camera and the superpower benefits of thermal imaging in one product," says James Cannon, President and CEO of FLIR.

"Now drone operators can capture data without landing, an important advantage for search and rescues operations, monitor the health of mechanical and electrical equipment remotely, and identify potential problems in buildings. Our collaboration with DJI perfectly aligns with our mission to use our thermal technology to help save lives and livelihoods."

​Operators can switch between thermal and visible cameras in flight, thanks to the new UAS camera being equipped with both a high-definition 4K color video camera and a high-resolution radiometric thermal camera. The camera also uses FLIR’s MSX technology, or multispectral dynamic imaging, that "embosses high-fidelity, visible-light details onto the thermal imagery to enhance image quality and perspective."

With this flexibility, operators can acquire double the data in a single camera and stay focused on mission-critical tasks.

"Since the introduction of our first FLIR camera in 2015 we have seen strong demand for thermal imaging-based products because they have helped transform DJI drones into essential and often lifesaving tools across a wide variety of industries," says Roger Luo, President at DJI.

"We are excited to introduce our next generation product together, the Zenmuse XT2, which is easier and more efficient to operate, and further demonstrates our commitment to innovation in the commercial drone industry."

The Zenmuse XT2 joins the ‘Thermal by FLIR’ partner program, which was created by FLIR to support OEMs and product innovators interested in using the FLIR thermal imaging sensors to "deliver the benefits of the World’s Sixth Sense." DJI is one of several partners involved with the program, with other partners including Casio, Panasonic, and ARSENZ.