In this week’s roundup from the Association for Unmanned Vehicle Systems International (AUVSI), which highlights some of the latest news and headlines in unmanned vehicles and robotics, learn about how keynote speakers at Xponential's "Unmanned for Good" session stressed the benefits of unmanned aerial systems for the humanitarian and public safety communities and the responders who risk their lives to make everyone safer. Additionally, learn about a technology that could greatly enhance flight times of UAS and beyond visual line of sight drone operations.

In this week’s roundup from the Association for Unmanned Vehicle Systems International(AUVSI), which highlights some of the latest news and headlines in unmanned vehicles and robotics,learn about how keynote speakers at Xponential's "Unmanned for Good" session stressed the benefits of unmanned aerial systems for the humanitarian and public safety communities and the responders who risk their lives to make everyone safer. Additionally, learn about a technology that could greatly enhance flight times of UAS and beyond visual line of sight drone operations. 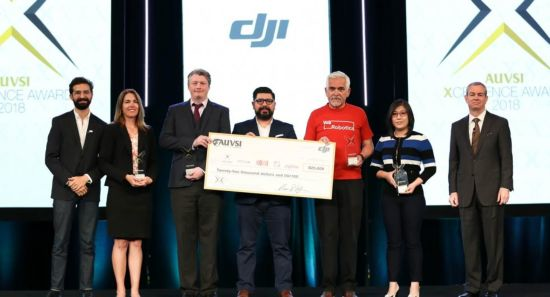 Keynote speakers at Xponential's "Unmanned for Good" session stressed the benefits of unmanned aerial systems for the humanitarian and public safety communities and the responders who risk their lives to make everyone safer.

UAS and the data they provide are becoming so effective for tasks like fighting fires that it is becoming unethical not to use them, said Robin Murphy, professor of computer science and engineering at Texas A&M University.

"We have an obligation" to provide technology, said Commander Tom Madigan of the Alameda, California, County Sheriff’s Office.

Murphy, who also is with the Center for Robotic Assisted Search and Rescue, said the organization has helped with some 27 disasters and incidents, including 9/11, Hurricane Katrina in 2005, the Fukushima nuclear plant explosion and mud slides.

In two weeks, she said, the Center will be helping Puerto Rico prepare for the upcoming hurricane season.

Charles Werner, chair of the National Council on Public Safety UAS, said UAS in 2017 alone were used to monitor and help people recover from floods, three hurricanes, a tornado, an earth quake and wildfires.

He praised the Federal Aviation Administration for working hand-in-hand to ease the job of first responders operating unmanned aerial systems.

Madigan said the first step for UAS users in fighting the California wildfires was getting prompt FAA permission to fly in Temporary Flight Restriction (TFR) areas.

He also said UAS technology was ultimately valuable for many reasons, including allowing residents to see exactly what had happened to their homes, even though they were not allowed to travel to them.

Some companies in the UAS constellation volunteered to help with the California wildfires, Madigan said. Pix4D, for example, used its advanced photogrammetry software to create 3-D models and maps of disaster-struck areas at no cost. After such scans, he said, cadaver dogs could be released without worrying that they would stumble on hot spots.

Mike Morgan, director of the Colorado Department of Fire Prevention and Control, said "being rapid" in responding to fires is critical, and that UAS fill the bill. UAS, working with manned aircraft carrying special sensors, form a game-changing team, he said.

Morgan said it was surprising to see how effective UAS technology can be. "Wow! We can do this easier!"

Murphy said she was surprised that while small UAS have been around since the 1990s, and were first used in 2005 in Hurricane Katrina, their use still is not widespread.

She also worried about the "avalanche of data" that comes from UAS. "How do you search through that?" Platforms, she said, will continue to evolve, but the issue will be data analysis.

She noted the interaction between UAS experts and local people who know the terrain. They can tell the experts precisely where to fly, she said.

Werner agreed that getting factual information is vital for meaningful decision-making.

The first ran from the 1960s to 9/11 and was centered largely on reconnaissance; the second followed 9/11 and focused on conflict in the Middle East; and the third, under way now, centers on two UAS groups — one focused on "profit" and the other on "good."

Next year’s Xponential is in Chicago, as was noted by Wynne and Michael Wilbur, AUVSI’s vice president of member services. Donning black hats, they did a shuffle from "The Blues Brothers" and invited the audience to next year’s show. 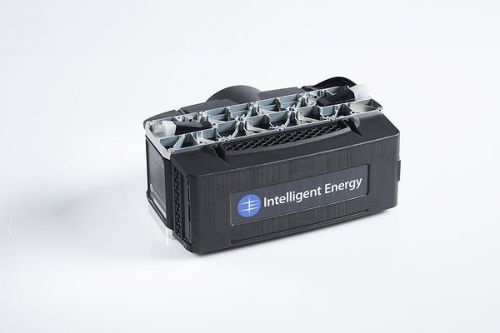 During Xponential, United-Kingdom-based Intelligent Energy made its debut by showcasing its fuel cell technology, which includes its lightweight 650W Fuel Cell Power Module specifically designed for the commercial UAS market.

Besides longer flight time, the module also offers additional benefits such as increased productivity, less downtime as a result of quick refueling, and increased payload capability.

Capable of being used as a standalone product, the Fuel Cell Power Module (FCPM) can also be combined with another module to provide up to 1.3 kilowatts of power. It is commercially available and can be used for a variety of UAS, including multi-rotor and fixed wing.

The module runs on hydrogen and ambient air to produce clean power in a "simple, cost effective, robust and lightweight package." The module can be integrated with UAS without compromising payload, providing an optimized, operational offering for a variety of industries.

Designed for use cases requiring both long flight time and stable maneuverability in narrow indoor or outdoor spaces—think inventory management at Walmart or a warehouse—the Jupiter UAS has a flight time of more than two hours thanks to Intelligent Energy’s technology. It can also fly for 50 minutes with a lithium-ion battery pack.

According to FlightWave, the Jupiter UAS is the first commercially-available UAS that can be powered by either a battery pack or hydrogen, as the two power systems can be swapped in a matter of seconds thanks to an easy-to-use, tool-free mounting system.

Callie Mortimer, FlightWave Director of Business Development, previously worked with Intelligent Energy, and actually played an integral role in the partnership that developed between the two companies to develop this UAS.

"When we met FlightWave at InterDrone, it was very obvious that we shared a lot of the same passion and ambitions for the H2 market and so the partnership seemed logical," Mortimer tells Unmanned Systems.

Mortimer is a stronger believer in the benefits that hydrogen can provide UAS going forward.

"It’s the tool of the future we believe," Mortimer says.

Hazon Solutions and PrecisionHawk have formed a strategic partnership that will result in Hazon serving as the preferred training partner for PrecisionHawk's Beyond Visual Line of Sight (BVLOS) waiver consulting program.

"Under the FAA Pathfinder Program, PrecisionHawk has developed a strong safety case for enterprises to conduct BVLOS drone operations, of which training and crew experience are a key component, two services where HAZON excels."

Hazon and PrecisionHawk say that while BVLOS flight operations offer an "exponential increase" in return on investment over traditional visual line of sight (VLOS) UAS flight operations or manned aircraft operations, expanding the area of operation by up to 50 miles, pilots must have "sufficient experience" in VLOS and receive BVLOS-specific training.

Under the Pathfinder fieldwork, PrecisionHawk recommends a "practical performance evaluation" (in-field test), and at least 15 to 20 hours of VLOS flight before BVLOS is attempted.

"This partnership with HAZON is not a test case or a proof of concept - we will be enabling production-level, routine BVLOS flight for commercial operations."

Hazon will expand its training team and open regional training centers, in an effort to facilitate the already-growing backlog of training requirements. In the coming months, details on expansion locations and hiring will be released.