In this week’s roundup from the Association for Unmanned Vehicle Systems International (AUVSI), which highlights some of the latest news and headlines in unmanned vehicles and robotics, learn about how Aurora’s Autonomous Aerial Cargo Utility System (AACUS) successfully delivered cargo to U.S. Marines during a training exercise, the U.S. Department of the Interior (DOI) awarding a "Call When Needed" contract to four companies for small UAS services, and a remotely-piloted aircraft demonstration in Japan.

In this week’s roundup from the Association for Unmanned Vehicle Systems International(AUVSI), which highlights some of the latest news and headlines in unmanned vehicles and robotics,learn about how Aurora’s Autonomous Aerial Cargo Utility System (AACUS) successfully delivered cargo to U.S. Marines during a training exercise, the U.S. Department of the Interior (DOI) awarding a "Call When Needed" contract to four companies for small UAS services, and a remotely-piloted aircraft demonstration in Japan. 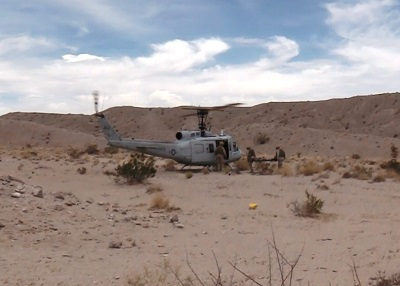 According to Aurora Flight Sciences, AACUS completed its first closed loop mission from takeoff to landing for its intended purpose of actual cargo resupply to Marines, as it successfully completed an autonomous cargo sustainment flight delivering more than 500 pounds of water, gasoline, MREs, and replacement communications gear including a packed cooler to represent urgently required cargo such as blood.

Aurora says that this was the first ever "autonomous point-to-point cargo resupply mission" providing critical logistics support to Marines in need.

"Aurora is building autonomous systems that will enable tomorrow’s intelligent aircraft," says John Langford, Aurora’s founder and CEO. "Whether it’s protecting Marines in combat or providing accessible urban transportation, autonomy is the key to the future of aerospace."

The AACUS-enabled UH-1H helicopter was developed under the Office of Naval Research’s (ONR) Innovative Naval Prototype program. The aircraft can fly completely autonomously thanks to a variety of technologies, including its onboard sensors, advanced computers and intelligent algorithms to plan its trajectory and to select its own landing sites in unmapped and hazardous environments.

"The AACUS program exceeded all of our expectations," says Dennis Baker, AACUS PM. "The team delivered on each of the ambitious technical performance goals, on schedule and under budget."

The American Helicopter Society selected Aurora’s AACUS program for its Howard Hughes Award in recognition of an "outstanding improvement in fundamental helicopter technology brought to fruition in the previous 18 months." On May 16, the AACUS team received recognition at the Grand Awards Banquet during AHS’s 74th Annual Forum & Technology Display in Phoenix, Arizona. Earlier, AACUS was presented an AUVSI Xcellence Award at the Xponential conference and exhibition in Denver.

The U.S. Department of the Interior (DOI) has awarded a "Call When Needed" contract to Bridger Aerospace, Insitu, Pathways2Solutions and Precision Integrated for small UAS services.

Described as a first of its kind for DOI, the contract will allow DOI to obtain "fully contractor-operated and maintained" small UAS that are ready when needed to support a variety of operations, including wildland fire operations, search and rescue, emergency management and other resource missions in the Contiguous 48 States and Alaska.

"This contract reinforces our commitment to partnering with industry to provide our employees with the latest technology in carrying out their responsibilities as stewards of our nation’s public lands while also ensuring their safety is paramount," says U.S. Secretary of the Interior Ryan Zinke.

The contract includes one base year, with four option years, and the total potential contract value is $17 million. Aircraft selected under the contract will be capable of operating day or night, without a runway in sustained winds up to 25 knots and at altitudes consistent with typical western wildfire environments.

The aircraft will operate from within the Temporary Flight Restrictions established over most large wildfires, which will allow them to take advantage of DOI’s unique authorities from the FAA to operate beyond visual line of sight (BVLOS), which DOI notes is an important capability in the smoky wildfire environment.

Thanks to the aircrafts’ longer endurance, incident commanders will be provided with near real-time access to critical fire boundary, behavior, and hotspot location, which will allow them to make faster, more informed decisions than in the past.

These aircraft—along with the tactical and division level fleet small UAS DOI has already integrated into the wildland fire environment—will enhance firefighter safety through the identification of emerging changes in fire behavior and escape routes.

Additionally, DOI says that it is currently working to bring small UAS to the hazardous aerial ignition mission, which has claimed two contracted helicopters and five lives over the last 13 years.

Future initiatives include the continued development of optionally-piloted helicopter technology developed by the Department of Defense to enable "safe and effective" use suppression of fires during the approximately 16 hours each day when night and reduced visibility currently prevent aerial support.

Being that 20 percent of all wildfires are discovered outside periods of traditional aviation support, DOI believes that tripling the amount of active aviation support time on wildfires will have "game changing benefits" in reducing the time, area, and cost to contain wildfires. 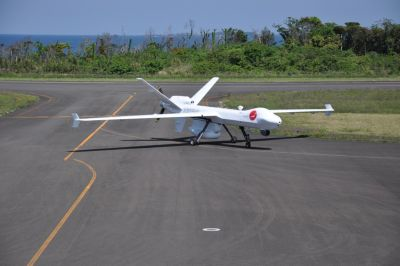 On May 13, General Atomics Aeronautical Systems Inc. (GA-ASI) conducted a "Public Day" demonstration of its Guardian Remotely Piloted Aircraft (RPA) for the community of Iki City and Nagasaki Prefecture in Japan.

​GA-ASI will spend three weeks conducting demonstration flights out of Iki Airport, in an effort to promote the "civil and scientific applications" of the RPA.

"We thank the Mayor of Iki and the many other public and private stakeholders for their making this demonstration possible," says Linden Blue, CEO GA-ASI.

"We believe that these flights of long-endurance RPAs in Japan’s maritime environment will provide valuable information, and we look forward to reviewing the important data gathered from these flights."

The demonstrations, which officially began on May 10, will be made up of approximately 10 five-hour test flights over a three week period out of Iki Airport, in the Nagasaki Prefecture. During these flights, data will be collected and shared across multiple government agencies.

According to GA-ASI, data will be collected for three main purposes—meteorological, disaster and oceanic observations; marine accidents and rescue support; and aviation, communications and industrial support.

The demonstrations are being led by GA-ASI, in cooperation with the Iki Airport. The data collected with the sensors on the Guardian will be provided to research institutions to support scientific research, and relevant organizations will receive flight data to help establish procedures for using RPA systems in private airspace.

Details for the demonstration have been coordinated with several organizations, including airspace authorities. Additionally, GA-ASI has sent a team of experienced RPA pilots and maintenance personnel to Japan to ensure safe operations during all phases of the demonstrations.