In this week’s roundup from the Association for Unmanned Vehicle Systems International (AUVSI), which highlights some of the latest news and headlines in unmanned vehicles and robotics, learn about the U.S. military’s commitment to adopting advanced technologies, and how this was a prominent topic from the first day of AUVSI Unmanned Systems Defense. Protection. Security in Maryland, USA.

In this week’s roundup from the Association for Unmanned Vehicle Systems International(AUVSI), which highlights some of the latest news and headlines in unmanned vehicles and robotics,learn about the U.S. military’s commitment to adopting advanced technologies, and how this was a prominent topic from the first day of AUVSI Unmanned Systems Defense. Protection. Security in Maryland, USA. 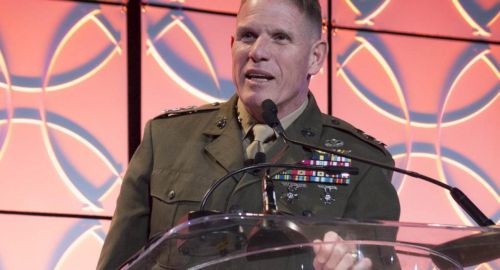 The U.S. military is committed to moving faster to get high technology into the field, according to several speakersat the opening day of AUVSI Unmanned Systems Defense. Protection. Security in Maryland.

The USMC is going back to its early days of being a highly experimental command, Walsh said, resurrecting its Sea Dragon series of exercises and putting a variety of off-the-shelf systems into demonstrations to see how they fare.

Last May, for instance, the Marine Corps brought more than 100 systems to the beach at Camp Pendleton to explore new ways of getting to the beach. The arsenal included small quadcopters, small ground robots, larger ground robots and maritime systems, some for reconnaissance, some of them armed.

"The first 20 minutes of what we were seeing was all unmanned," Walsh said. "When we started with the project, I never would have dreamed any of that, at all … this is happening so fast, it’s changing our ideas."

For one thing, the Corps is buying small quadcopters for all its squads.

"We never had anything like that, even at the company level. We are getting one for every single squad in the Marine Corps."

That has led to some unexpected lessons.

"We throw a lot at them and it’s not all integrated; they actually needed more Marines in the units to help them with the technology, whether it was an assistant to the squad leader or a tech manager," Walsh said.

To help solve that problem, the USMC need systems that have greater autonomy, or at least a common controller, which would be "one way to reduce manpower."

The Department of Defense is famous for its lengthy and slow acquisition process, something that typically is a turn-off to fast-moving Silicon Valley startups who are driving the very technology the military needs.

To help with that issue, in 2015 the DOD set up DIUx, an organization intended to bridge the gap between Silicon Valley and the military. It’s headquartered in tech-heavy Mountain View, California, with outposts in the tech hotspots of Austin, Texas, Cambridge, Massachusetts and Washington, D.C.

Orin Hoffman, head of autonomy and robotics for DIUx, said he works with startups that have technology of interest to the military, but which may not be ready for venture capital dollars.

DIUx focuses on autonomy, artificial intelligence, human systems, information technology and space, although it will consider other areas as well.

It has focused on trying to solve problems by contracting for rapid prototypes, with the idea that they could move into production at a much faster pace than has been typical.

"We can go directly from this fielded prototype that’s been successful in the field, directly into production, and that’s critical for our speed," Hoffman said.

So far, 650 companies in 41 states have competed for DIUx contracts, creating 61 pilot contracts, of which three have now made it to production.

He said the Air Force sees a "desperate need" for new technology, but the best and brightest startups avoid the defense acquisition bureaucracy.

The process is now in the "mentor madness" phase in Boston, which will lead to the companies being able to make a refined pitch. The process will start again next January, with applications due this fall.

Areas of interest include sensors, cybersecurity, new means of propulsion or power, new materials, new types of drone or drone swarm management, counter-drone technology, and a category dubbed "surprise us!"

"Surprises are the leaps," Pierce said.

Industry is seeking to do its part as well. Patrick Weldon, director of advanced technology at Polaris, a maker of defense and commercial ground vehicles, said his company is adopting an open-architecture model to help speed the introduction of technology to the troops.

Polaris is displaying its MRZR X connected vehicle on the show’s exhibit floor. The MRZR X, developed in partnership with Applied Research Associates and Neya Systems, is an unmanned variation of Polaris’ MZRZ squad vehicle. It is among four finalists in the running for the U.S. Army’s Squad Multipurpose Equipment Transport (SMET) program.

Weldon said for modern warfare, the "squad is now the best source of information in combat," and an open architecture approach will help get that technology and information there.

He noted that for the MRZR X, "the people in this room are going to make it happen. We are going to open that architecture."

The same year DIUx was created, the Navy secretary established Brig. Gen. (ret.) Frank Kelley as deputy assistant secretary of the Navy (DASN) for unmanned systems, and he made his debut in that role at AUVSI’s conference that year.

At the time, Secretary of the Navy Ray Mabus stood onstage with a drone that could also travel underwater, a system named Kraken.

"He had a platform, a device, and that’s what we were thinking about in those days," Kelley said. Now the program executive officers "have that stuff licked," and the Navy grapples with other issues, such as autonomy and something even more fundamental, trust — knowing the systems will operate as advertised.

Kelley said he doesn’t believe the United States is behind on autonomy and artificial intelligence, although "our approach might need to calibrate. Instead of focusing on general AI, maybe we have devices that do one or two, maybe even three things, really well, and do it routinely all the time, and then deploy that in scale … not in the hundreds, but in the thousands. I think that’s where we need to go with our autonomy."

He noted that the Navy has a new assistant secretary for research, development and acquisition, James "Hondo" Geurts, who has called for daily 15-minute meetings with all his DASNs.

"That’s an opportunity for us, every day, to get unmanned systems in front of ASN RDA," Kelley said. "That’s my job, to do that for you."

Next page: Learn about the first full-scale flight test of the Vahana—an all-electric, self-piloted vertical takeoff and landing aircraft, as well as a drone company that has received permission to fly UAS in key airport traffic areas and controlled airspace in Las Vegas.