A custom imaging system and processing algorithm may make possible high-resolution photos from hundreds of kilometers away. 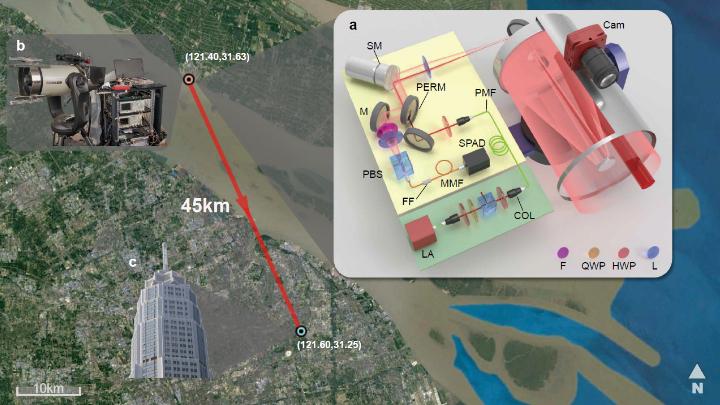 Researchers from the University of Science and Technology of China in Shanghai have demonstrated the ability to take photographs of subjects up to 45 km (28 miles) away by using single-photon LiDAR. When coupled with a computational imaging algorithm, the new system can take high-resolution images at tremendous distances, potentially at hundreds of kilometers away.

These advantages make SPL technology attractive for large-area applications like geospatial mapping. The intensity of data gathered by SPL can lead to increased high and low noise points that must be filtered to provide accurate imaging, however.

The researchers from the University of Science and Technology of China achieved their results by designing a high-efficiency coaxial-scanning system that is better able to collect the weaker photons returned from longer-distance ranging measurements, and a computational algorithm designed specifically for long-range 3D imaging to filter out background noise. 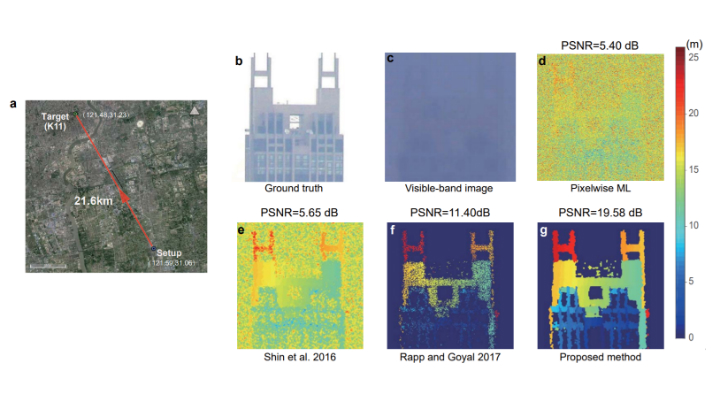 The scanning system was built from a Cassegrain telescope with 280 mm aperture and high-precision two-axis automatic rotating stage, assembled on a custom-built aluminum platform. A 1550 nm laser with 500 ps pulse width at 100 kHz repetition rate, and average power use of 120 mW, was used for ranging.  The laser output was polarized vertically, projected into the telescope via a small hole in the mirror, and expanded.

An InGaAs/InP single-photon avalanche diode detector registered the returning photons after they were spectrally filtered, and the custom-designed algorithm used global-gating and a 3D matrix to provide super-resolved image reconstructions.

The researchers placed their imaging equipment on the 20th floor of a building and targeted the Pudong Civil Aviation building at a distance of 45 km. The experiment was conducted at night, and a 128 x 128 image was produced. A second experiment targeted a skyscraper named K11, that was 21.6 km away, to produce a 256 x 256 image. This experiment was conducted at day and night. In all cases, the custom algorithm was able to detect features of the buildings that other, established algorithms could not.

The system is designed for reverse engineering and scientific measurement applications.
Nov 19th, 2019

The Gocator 2512 smart 3D laser profiler from LMI Technologies is designed to scan glass and specular surfaces. It has a measurement range of 6 mm, a specular field of view of 14.5 mm, can scan, measure, and control at up to 10 kHz, and has 8 micron X resolution and 0.2 micron Z repeatability.
Mar 29th, 2019