In surveillance and industrial inspection systems, it may be necessary to capture a very large field of view (FOV) of a scene. With regard to surveillance systems, for example, simultaneously imaging panoramic views of a scene provides a means to automatically detect any motion or objects of interest within a large area. 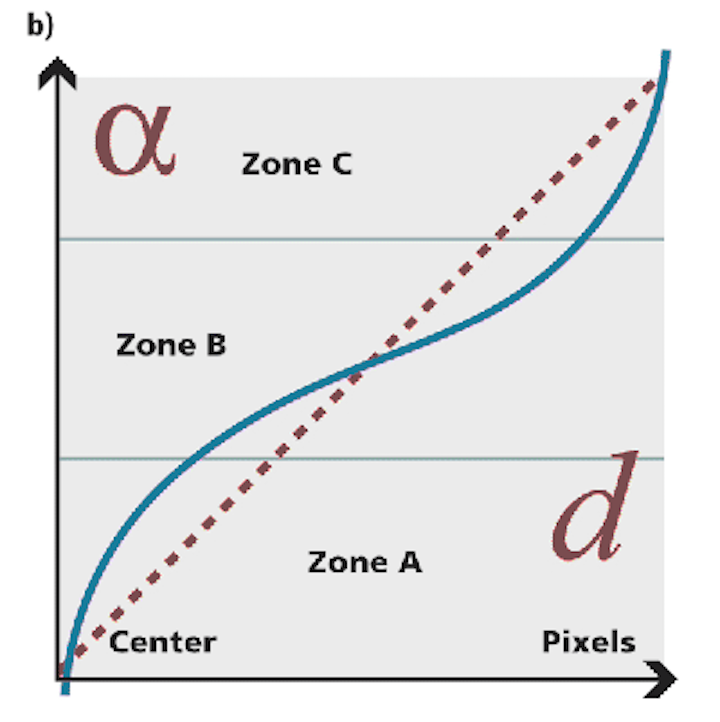 In surveillance and industrial inspection systems, it may be necessary to capture a very large field of view (FOV) of a scene. With regard to surveillance systems, for example, simultaneously imaging panoramic views of a scene provides a means to automatically detect any motion or objects of interest within a large area. In industrial applications, such as pipe inspection, systems must be designed so that a complete 360° image of the inside wall of a pipeline can be imaged and analyzed for any cracks or impurities in the pipe.

Methods to increase the FOV of these systems include employing multiple sensors and cameras, single-sensor and prism combinations, and gimbal-mounted camera systems. Of the single-lens, single-sensor implementations that exist, traditional fisheye and catadioptric lenses can both be used to produce a 180° × 360° hemispherical footprint on a single image sensor.

Catadioptric lenses can also be used to produce a similar 180° × 360° hemispherical footprint, but the central obstruction created by the nature of their design results in a central blind spot where no image data can be captured.

“In many surveillance applications,” says Gib de Medeiros, vice president of custom panoramic applications with ImmerVision (Montreal, QC, Canada), “image data at certain areas within the field of view are less important than others.”

In a security application used in a building, with a camera mounted on the ceiling facing down, image data at the periphery of the FOV may reveal building lights and sprinkler systems; image data at the center may reveal the top of a person’s head. The most important data, however, may be captured within a region a number of degrees from the vertical axis (see figure, part a).

ImmerVision has invented a 360° panomorph lens where the panoramic coverage area can be divided into different zones, all of which present to the image sensor a different resolution (see figure, part b). Since the objects in Zone B (at 60° to the vertical axis) of the figure are most significant, the relative angular resolution in pixels/degree in Zone B should be higher than Zone A or C.

To bring the technology to market, ImmerVision is working with a number of companies to develop specialized lenses for a number of different applications. In January 2011, the company announced that Santec (Ahrensburg, Germany) had developed a video surveillance camera based on the technology. The SNC-P3601M, 1.3-Mpixel 25-frame/s IP-based network dome camera features an integrated panomorph lens and uses ImmerVision Enables recording and viewing devices to provide 360° surveillance from various simultaneous perspectives.

At the SPIE Defense, Security + Sensing show, held in April 2011 in Orlando, FL, the company also demonstrated Pipe Unwrapping software from POSM Software that can be used with teleguided pipeline inspection systems from RS Technical Services (Petaluma, CA, USA). In operation, data captured by the single-camera imager mounted in the inspection system can be remapped to produce a flat map of the inside surface of pipelines and sewers.