A startup company called Orbbec has developed a 3D camera called Persee that features an integrated ARM-based computer that can run applications without the need for an external processing source. 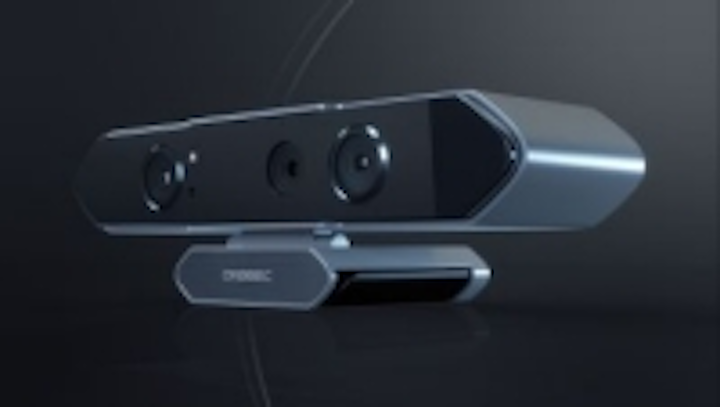 Seen on Tech Times:Orbbec, the company behind the camera Astra 3D, brings two more new gadgets to the market. Persee is a crowdfunded technology that brings together an integrated ARM computer that runs applications without requiring an external processing source and a 3D, depth perceiving camera.

A startup company called Orbbec has developed a3D camera called Persee that features an integrated ARM-based computer that can run applications without the need for an external processing source.

The Persee camera is astructured light 3D camera that works by recovering the 3D positions of points on an object by projecting a pattern with known features on it, then performing 3D reconstruction on image correlation and triangulation bias. It features a 1280 x 720 RGB image sensor that can run at 30 fps, with a 16-bit 640 x 480 depth sensor that can also run 30 fps.

It’s hardware configuration features a 1.8 GHz ARM Cortex A17 quad-core with a a 600 MHz Mali-T7 GPU that has OpenCL support for graphics. The camera has 2 GB GB of DDR3 memory, and an internal capacity of 16 GB, from an eMMC flash chip. Additionally, the camera’s wired connection uses an integrated Ethernet pot, while a built-in Bluetooth antenna and 2.4 GHz/5 GHz Wi-Fi allows wireless connections. A USB 2.0 port can be used for either external HDDs or input devices, and users can also attach a display to the Persee through the HDMI 2.0. Persee runs on Ubuntu and Android and also features Orbbec Astra SDK and OpenNI.

The company also developed the Astra Pro 3D camera, which is a PC-based 3D camera with optics identical to the Persee camera. The Astra Pro camera, according to Orbbec, could be used to test apps created for the Persee, or separately for 3D scanning applications.

Orbbec put the Persee, as well as the Astra Pro camera, onto the crowdfunding site Indiegogo. In just a few days’ time, Orbbec achieved its $40,000 goal. Following this success, Persee cameras could be shipping as soon as February 2016. The company sees the Persee cameras as being suitable for use in such applications as robotics, 3D scanning, digital art, research, and other hobbyist applications

Robotics, in particular, could be an interesting application for these cameras. In a December 2014 magazine article, Andy Wilson discussed the optionsfor choosing a 3D vision system for automated robotics applications. Perhaps the Persee 3D camera could be used for such applications, assuming the product is able to successfully launch into production.